FIFA+ is now available to download on iPhone, iPad, and Android devices. 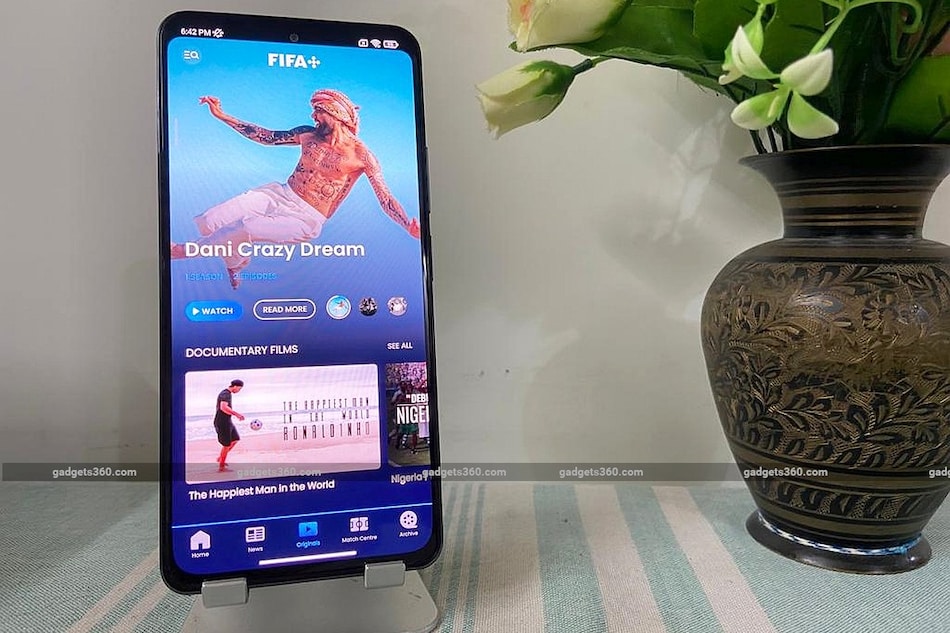 FIFA+ content, including the documentaries and archived matches, is free to stream

FIFA+ — the free OTT streaming service announced by the international governing body for football — is now available globally including in India. Launched as a streaming platform not unlike Disney+ Hotstar and Amazon Prime Video, the service allows you to tune into special content including documentaries and features on Ronaldinho, Dani Alves, Ronaldo Nazário, Romelu Lukaku, Lucy Bronze, Carli Lloyd, and more. You can also check live statistics and updates for ongoing matches. FIFA+ will also give users access to live domestic league games, along with access to over 29,000 men's matches and 11,000 women's matches, according to FIFA.

Here's everything you need to know about FIFA+, from how to access the service and what's currently available to view on the platform.

The newly announced FIFA+ service is a digital platform designed to provide access to live football matches from every corner of the world, interactive games, news, tournament information, and other video content. FIFA is touting the service as a way to ‘democratise' football. The site's features appear to be completely free at the moment, and are supported by promotions for FIFA's official sponsors.

You can access a lot of information across various competitions and all six confederations for both men's and women's football. This includes match statistics including the latest results, live match scores, group tables, and more. You can also access FIFA+ Trivia, which lets you test your football knowledge from of some of the most iconic players to captains of different World Cup teams.

The news section lets you read stories and news features on football, or watch highlights of matches. This section appeared to be updated with the latest football news stories of the day, along with highlights of recent matches. FIFA+ also has dedicated sections for women's football, the upcoming FIFA World Cup 2022 Qatar, and more news stories from the FIFA+ Archive.

At the time of launch, FIFA+ has more than eight video titles to watch, including Ronaldinho: The Happiest Man in the World, a 90-minute film on the story of the player's life from the streets of Brazil to becoming one of the most popular football players of all time, Croatia: Defining a Nation, a feature-length documentary on a group of friends who became world famous in the face of extreme adversity.

In addition to documentaries and features, FIFA+ also allows you to access season 1 of Captains, an eight-part series that is set in the backdrop of the FIFA World Cup Qatar 2022. You can follow six captains from Croatia, Jamaica, Lebanon, and Brazil, as they lead their teams through the World Cup. There's also Dani Crazy Dream, a six-episode documentary series featuring Dani Alves, and Golden Boot, a four-episode docuseries on the leading FIFA World Cup goal scorers.

Icons is a five-episode docuseries with each one dedicated to women that changed the game of football. You can watch the stories of Wendie Renard, Lucy Bronze, Asisat Oshoala, Carli Lloyd, and Sam Kerr, narrated by themselves.

FIFA+ has ambitious plans for streaming content and plans to bring unserved competitions from around the world in men's women's and youth football. You can already stream a lot of live match content from the website. The quality of the video stream is adjusted automatically depending on your internet connection, as is the case with all OTT apps. According to FIFA, by the end of 2022, users will have access to 40,000 live games per year from 100 member associations across all six federations.

The streaming platform also lets you relive some of the best moments of football, with access to more than 2,000 hours of archive content on the FIFA+ Archive. This includes full-match replays, highlights, goals and more, with access to more than 2,500 videos going back to the 1950s, which appears to be a good choice for reliving nostalgic football memories over the years. The currently featured match on the FIFA+ Archive is the full replay of the Italy vs Germany final match from the 1982 Men's World Cup.

WeWork to Partner With Yardi Systems to Develop Tool For Companies to Manage Employees And Office Space
WhatsApp to Expand Indian Payments Service to 100 Million Users, Wins Approval From NPCI