Apple users in India are getting an error when they try to turn on the feature on their devices. 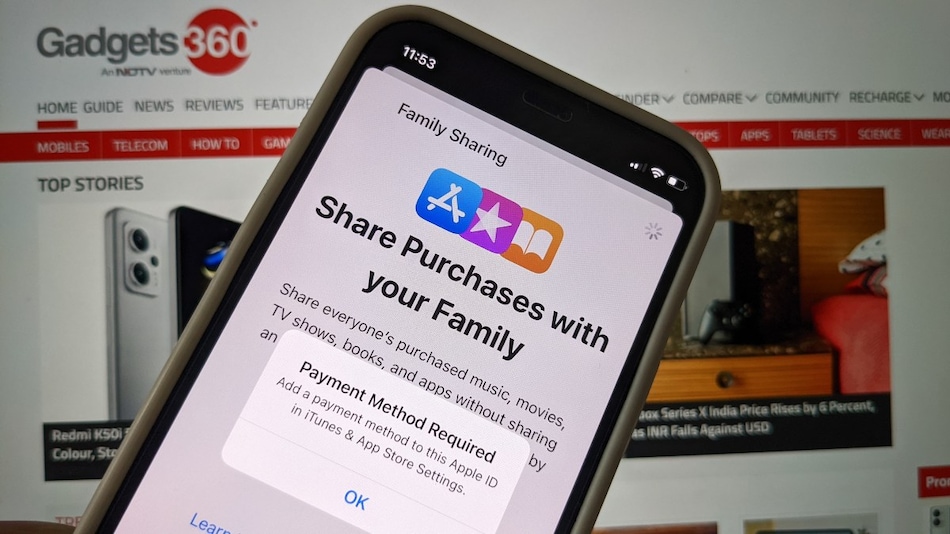 Apple's Purchase Sharing is not working in India. The opt-in feature is available as a part of Family Sharing and is meant to let users share their purchased albums, apps, movies, songs, and TV shows with family members. Once turned on, Purchase Sharing lets all people in a family group access the content that family members buy. The family organiser is billed for these purchases. Apple is showing an error to users when they try to enable the feature in India.

Users get a pop-up with the error that reads, "Add a payment method to this Apple ID in iTunes & App Store Settings." This comes irrespective of whether UPI or Net Banking is used as the payment method for the particular Apple ID.

Gadgets 360 was able to verify the issue on a couple of Apple IDs. A Reddit thread suggesting the problem has existed since May. However, Apple is yet to bring a fix.

Although the exact reason for why the Purchase Sharing feature is not working in India is yet to be revealed, it appears that the rules for recurring online payments that were released by the Reserve Bank of India (RBI) last year are its primary cause.

Due to that disruptive move by the central bank, Apple previously stopped accepting card payments from its users in the country for buying apps and subscribing to its services. The Cupertino company also completely removed the card payment method and made UPI as well as Net Banking as the two remaining options for its Indian consumers.

Gadgets 360 has reached out to Apple for a comment on the unavailability of its Purchase Sharing feature in India and will update this article when the company responds.

Purchase Sharing was introduced in December 2020 to let Apple users share their purchases using the Apple ID with family members. A number of developers have enabled the feature for their paid apps to allow users to share them with their family, without requiring any additional purchases.

Nothing Phone 1 to Reportedly Get 120Hz Display, Pre-Order Pass Available on Flipkart