Samsung Pay Launched in India: Partner Banks, How to Use, Supporting Smartphones, and More 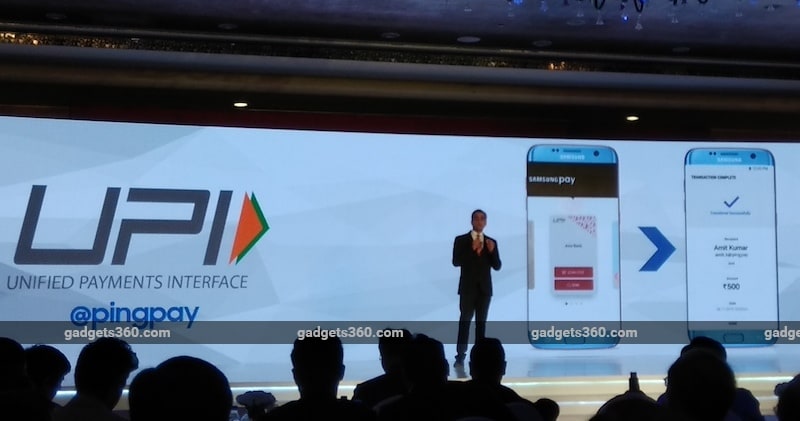 Samsung Pay mobile payments platform has been officially launched in India, weeks after the company started the Early Access programme for the service. The new payments solution will work with most major banks, UPI, and Paytm. At the Samsung Pay India launch event, NITI Aayog CEO Amitabh Kant said the solution will help drive the formal economy in India, where 86 percent of the transactions are still done using cash. Compared to the Early Access programme, Samsung Pay at its formal launch supports American Express cards.

To recall, Samsung Pay supports both NFC and MST (Magnetic Secure Transmission) that allows a user to send a magnetic signal from smartphone to the payment terminal's card reader.

Partner banks for Samsung Pay at launch include Axis Bank, HDFC Bank, ICICI Bank, SBI, Standard Chartered, and American Express. Citibank will become an issuing partner soon, with its credit cards set to supported in the near future. As mentioned above, Samsung Pay users can link their Paytm Wallet to the service.

Samsung Pay UPI integration is currently in its beta phase, and will roll out within two weeks, the company says. It is live now, however, and the UPI ID assigned to Samsung Pay is @pingpay. Users can create their user ID with username@pingpay to send or request money. The Samsung Pay UPI solution is powered by Axis Bank.

Also announced at the event was imminent support for company's Gear S3 smartwatch.

HC Hong, President and CEO, Samsung Southwest Asia, said, "Samsung Pay is an example of how we continue to push the boundaries of innovations to make life simpler and better for consumers. I am confident Samsung Pay will redefine digital payments and contribute to Digital India."

"Our insights show that convenience, security and acceptance are seen by consumers as the most important influencers when choosing among different digital payment options,” said Mr. Asim Warsi, Senior Vice President, Mobile Business, Samsung India. “With Samsung Pay, we give our consumers the smartest way to make digital transactions by far. Samsung Pay is highly secure through the signature KNOX Platform, fingerprint authentication and tokenization. We have partnered with major banks and card networks to give our consumers the widest range of choices, and are working on bringing more and more partners on board soon."

How to use Samsung Pay

How to set up Samsung Pay

Samsung Pay app registration is a one-time process, and it can be done with your Samsung Account ID and password. You can register fingerprint by tapping Use Fingerprint and users can also set up Samsung Pay PIN for payment authentication. During setup, users can opt for Skip and Use Samsung Pay PIN on the verification method page. For adding new cards, tap on Add your Debit/Credit Card which by default launches the camera within the app to auto read card details. It can be also done manually.

For making a payment using Samsung Pay at a store, owners of compatible Samsung Galaxy smartphones will need to launch the Samsung Pay app and then select the card they want to pay with by swiping left or right. Users can then authenticate the payment by verifying their fingerprint (or using their Samsung Pay PIN), and then place the phone near the POS machine or card reader or NFC reader to complete the transaction. In case prompted for a PIN, users may be required to input 4-digit card PIN.