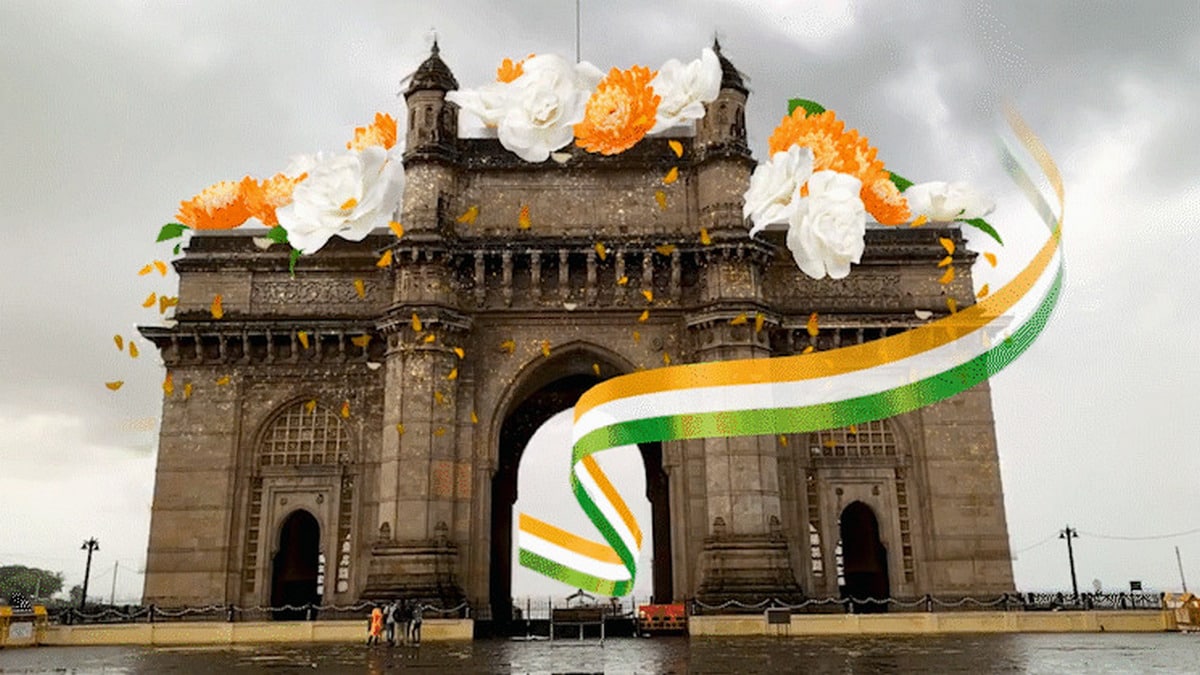 Snapchat parent company Snap has expanded its presence in India by bringing the Landmarkers feature to two Indian monuments. The feature, which is designed to let users superimpose augmented reality (AR) experiences on top of popular architectures, was initially launched back in April. It uses data from the public stories posted by Snapchat users through the Our Stories section to deliver a digital representation of physical landmarks. The expansion of the Landmarkers feature is a part of the Lens Studio 2.1 that has been released globally to build new AR-based filters, which the company calls Lenses.

The Landmarkers feature on Snapchat was initially designed to support five locations around the world, namely Buckingham Palace in London, UK; Eiffel Tower in Paris, France; Flatiron Building in NYC, US; TCL Chinese Theater in Los Angeles, California, US; and the US Capitol in Washington, DC, US. However, Snap has now expanded the experience by adding the Gateway of India and Taj Mahal to the list of supported places. This means Snapchat users aka Snapchatters will now be able to add fun effects when they're around these two monuments in India. Lens creators can also use the feature to bring new AR experiences to the available monuments.

"Our goal is to continue to scale and allow our community or ecosystem to engage in the world and to be curious about the world, to discover the world, and to do that all in the camera -- with the Landmarkers," said Eitan Pilipski, VP -- Camera platform at Snap, in a telephonic conversation with Gadgets 360.

Pilipski pointed out that on an average, more than 70 percent of Snapchatters play or view Lenses on the platform every day that brings over 250 million minutes of playtime in AR each day on an average. This shows how the social media app, which is meant for real friends, is receiving engagements on its AR developments. But apart from the users, the company is also attracting advertisers through its immersive experiences that are available through different Lenses and using initiatives like the Landmarkers feature.

"What we've seen is that some of our partners/ advertisers actually found us to build really interesting opportunities for them to create some campaigns around those Landmarkers," asserted Pilipski.

In June, Sony Pictures leveraged the Landmarkers feature to promote Spider-Man: Far From Home through an AR Lens that was visible in all the five supported locations. Netflix also promoted Stranger Things using Snapchat's Landmarkers.

Pilipski is bullish on a similar success of the Landmarkers feature in India.

"We really believe that this is the next frontier," he says. "This is what's coming. This is the next stage for AR. These immersive experiences that we can create in a location that has obviously a meaning for the specific folks in that region."

Users can access the Landmarkers feature by going to the camera screen on the Snapchat app. The app will also notify users when they're near a supported location -- say Gateway of India or Taj Mahal -- once they've opened its camera and accessed the Lens carousel.

The expanded Landmarkers feature, which includes the two new Indian monuments and 12 other places from around the world, comes through Lens Studio 2.1, which is the successor of the Lens Studio 2.0 released earlier this year. The new Lens Studio app also includes six new Lens templates that are in addition to the existing nearly 40 templates. These templates are namely Face In Video, Portrait Particles, Countdown, Skelatal, Hair colour, and Make-up.

Lens creators can utilise the new Lens Studio release to create new AR experiences for the Snapchat app. For those who're just starting with Lenses, the new release brings an interactive tour that breaks down Lens creation step-by-step. Lens Studio Templates are also available through GitHub, and creators have been provided with the ability to add their creations to the GitHub repository.

"I think one of the insights that we're getting from working with the creators in India is that they're very creative," states Pilipski, adding, "That's a great example of the massive opportunity that we have."

Aside from the three Official Lens Creators from India, Snap recently launched a pilot Lens Studio education programme in 10 high schools in India and conducted workshops in three schools, namely Jamnabai Narsee International School, CP Goenka International School, and Chatrabhuj Narsee School. The workshops were aimed to teach the students with basic Lens Studio skills to let them create new Lenses for their school, school events, or causes that they support. One of the Official Lens Creators is assigned to run the workshops under the programme.

"We think there's so much we can learn by partnering with education, design schools in India," says Pilipski. "We know that this region is very, very advanced in terms of how to explain and how to educate about new technologies."

Snap recently opened its local office in Mumbai and is optimistically bringing new localisations to the Snapchat platform to attract Indian users.

"We think that we have this amazing opportunity in the India region to work together with our local team, with our ecosystem and with our partners, to experiment, learn, and evolve the creative experiences that we can power in the market," concludes Pilipski.