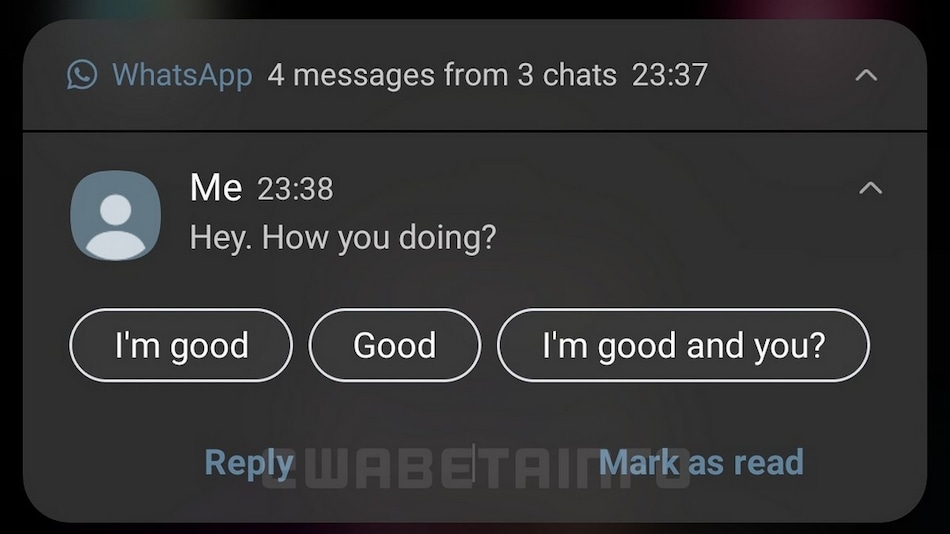 WhatsApp has reportedly restored green colour notifications for its Android beta app. WhatsApp started testing a dark blue colour for its notifications with the 2.21.12.12 beta update but it looks like that didn't sit well with the beta users. The colour can be seen in the WhatsApp notifications for app name, reply, and mark as read buttons. Now that the Facebook-owned instant messaging service has decided to revert to its original colour scheme, the blue colour will likely not come to the stable release.

As per the latest report by WhatsApp feature tracker WABetaInfo, the messaging service was testing blue colour for its notifications on Android. With this implementation, the WhatsApp app name, ‘reply', and ‘mark as read' options in the notification shade for Android users who are using the beta version of the app was changed to dark blue instead of green. Now, according to the report, the colour has been reverted to green due to feedback from the users.

WABetaInfo says users of the beta version complained that the new colour wasn't properly visible in notifications because of its contrast. Now that WhatsApp has decided to go back to the original green colour, it doesn't look like the blue colour for notifications will be making its way to the stable release. Typically, WhatsApp tests new features in the beta version of the app and then depending on response and functionality, brings them to the stable version.

Recently, WhatsApp added voice call feature for Jio Phone and other KaiOS-based feature phones. It works on Voice over Internet Protocol (VoIP) technology and required an active mobile data or Wi-Fi connection. Last week, it was reported that WhatsApp is testing Flash Call feature that lets users log into their accounts quickly. Instead of the six-digit code, WhatsApp will reportedly make a flash call to the user for the purpose of verification.