The calling feature for KaiOS feature phones is available with WhatsApp version 2.2110.41. 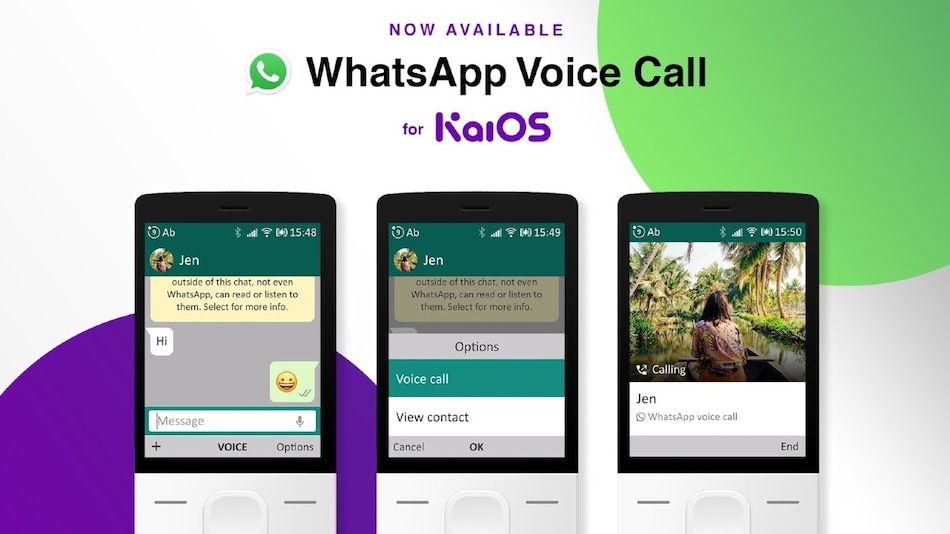 WhatsApp voice calls are now available for Jio Phone and other KaiOS-based feature phone users around the world. The new feature works on the Voice over Internet Protocol (VoIP) technology and requires users to have an active Wi-Fi or mobile data connectivity for making WhatsApp calls. The Facebook-owned company on Tuesday said that voice calling through WhatsApp was now available to millions of smart feature phone users globally. WhatsApp for Jio Phone was launched in 2018, though it debuted on other feature phones based on KaiOS in 2019.

Users need to download WhatsApp version 2.2110.41 on their Jio Phone and other KaiOS devices to get the voice calling feature. Once enabled, users can make WhatsApp calls by going to Options > Voice call of any chat thread available. Users can also attend WhatsApp voice calls on their feature phones including Jio Phone just like how they attend normal calls. However, it is important to note that the phone must be connected to either Wi-Fi or cellular Internet to receive calls via the instant messaging app.

“Bringing WhatsApp voice calls to KaiOS-enabled devices helps us connect the world privately through a service that is simple, reliable and accessible to everyone - no matter what kind of mobile device they're using,” said Matt Idema, COO of WhatsApp, in a statement.

WhatsApp debuted on Jio Phone ahead of its release on other KaiOS phones in September 2018. It, however, came on models including the Nokia 8110 4G in 2019.

Since its release, WhatsApp comes preloaded on most KaiOS phones. The app is even claimed to be the top KaiOS non-system app with the highest monthly active users worldwide. However, WhatsApp has not provided any official numbers to support the claim.

“Together with WhatsApp, we are taking another significant step towards the goal to make essential, useful services accessible for everyone, including underserved communities, seniors looking for simple devices and those using KaiOS devices as a companion phone. Now with the voice calling feature, users can easily place a call anytime anywhere in a cost-effective way,” said Sebastien Codeville, CEO of KaiOS Technologies.

WhatsApp introduced its voice calling feature on smartphones way back in February 2015. Though WhatsApp for Desktop users received the ability to make WhatsApp voice calls through its Windows and Mac apps only in March this year.