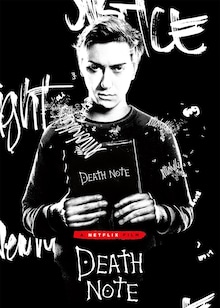 An American high school student named Light Turner (Nat Wolff) finds a mysterious supernatural notebook known as "Death Note". The book is dropped to Earth by a Shinigami, a Japanese death demon, named Ryuk (Willem Dafoe). The book has the following rules: simply inscribe someone's name within its pages, and they will die.

Light writes a name along with the manner of death, and the same unfolds in front of his eyes. Intoxicated with the new power, Light then launches a secret drive to rid the world of criminals and begins to eliminate those he seems unworthy of life.

This supernatural crime thriller flick is loosely based on the Japanese manga series of the same name. Rating 43
Rate this Movie
Your Rating

The Death Note adaptation by Netflix has a lot of things wrong but the biggest one is its preposterous attempt at compressing a big chunk of the story told by Tsugumi Ohba and Takeshi Obata over 108 chapters in the manga (and 37 episodes in the critically-acclaimed anime) into a film running barely over 90 minutes. In packing a dozen hours worth of a tale about morality, religion, violence, and justice into a feature-length project, the Death Note Netflix movie – directed by Adam Wingard (The Guest), and co-written by Jeremy Slater, and brothers Charley & Vlas Parlapanides – fails to handle the nuance that has made Death Note so resonant and popular, and instead produces a gory violent film by way of weird teenage high-school romance.