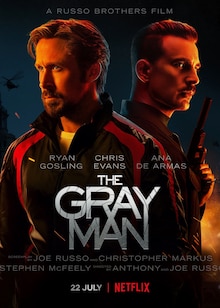 The Gray Man is CIA operative Court Gentry (Ryan Gosling), aka, Sierra Six. Plucked from a federal penitentiary and recruited by his handler, Donald Fitzroy (Billy Bob Thornton), Gentry was once a highly-skilled, Agency-sanctioned merchant of death.

But now the tables have turned and Six is the target, hunted across the globe by Lloyd Hansen (Chris Evans), a former cohort at the CIA, who will stop at nothing to take him out. Agent Dani Miranda (Ana de Armas) has his back. He’ll need it. The Gray Man — out Friday on Netflix — brings the Russo Brothers, directors of Avengers: Endgame and Avengers: Infinity War, back into big-budget action filmmaking. And they have all the right ingredients at their disposal. For one, they are working with the writers behind those Avengers movies, Christopher Markus and Stephen McFeely, who have shown themselves capable of handling unwieldy material. By contrast, The Gray Man — based on Mark Greaney's 2009 eponymous novel — is thin and straightforward. In Ryan Gosling, they have a lead star who's been underused in genre film. And he's surrounded by the smile of (former) Captain America in Chris Evans, the resoluteness of Ana de Armas, and the suave of Bridgerton's Regé-Jean Page. On paper, The Gray Man feels like a home run.