Master of None, Alien: Covenant, Minecraft: Switch Edition, and More – The Weekend Chill 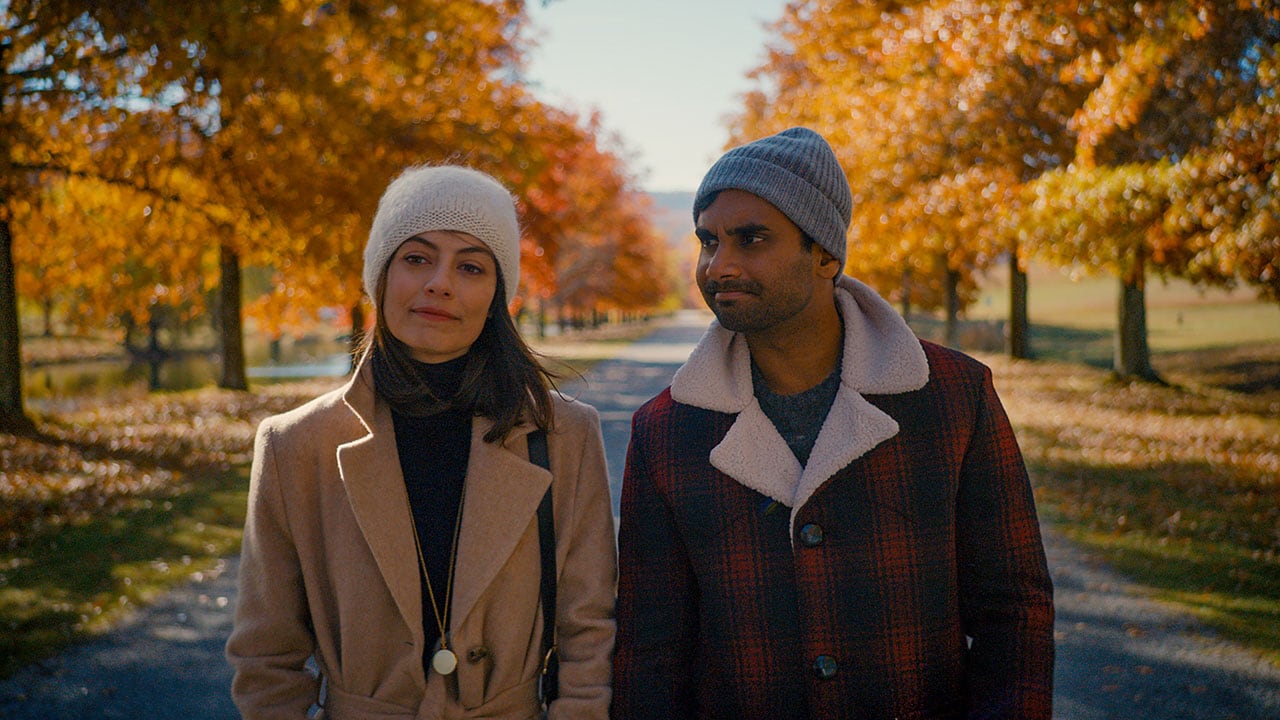 In an interview over the weekend, director Doug Liman (The Bourne Identity) revealed the title for the sequel to his sci-fi film Edge of Tomorrow. It will be called ‘Live Die Repeat and Repeat’, which is a riff on the first film’s tagline, that also served as an alternative title during its home media release. Both Tom Cruise and Emily Blunt are expected to return.

Netflix has given the go-ahead for a second season of controversial hit series, 13 Reasons Why, which has been criticised in some corners for its graphic depiction of teen suicide. The show will expand beyond the book, since season one covered everything from there.

Also on Sunday, Warner Bros. released the final trailer for its next DC superhero entry, Wonder Woman. The film stars Gal Gadot as Diana, who travels to Europe after learning about World War I from Chris Pine’s US Army pilot. Wonder Woman opens June 2.

Then on Monday, Blade Runner 2049 – the follow-up to Ridley Scott’s powerful original from Arrival director Denis Villeneuve – got its first full trailer, which gives us a better idea of the sequel’s tone, visuals and setting. Blade Runner 2049 arrives October 6.

Alien: Covenant is out this week, and director Ridley Scott has already been talking about potential sequels. In an interview with IGN, he said that he expects to start filming on the next one “within 14 months” if everything goes well.

Last year’s Deadpool helped reinvigorate Fox’s big-screen superhero ambitions, and it’s now taking the potty-mouthed character to TV. In collaboration with Marvel Television, FXX has given a direct order of ten episodes for an adult animated series, with Community actor and Atlanta creator Donald Glover as co-showrunner. The new show will debut in 2018.

Lastly on Thursday, the TV gods at Starz renewed American Gods for a second season, on the back of strong performance for the first two episodes. It’s expected to have around eight episodes, and air mid-2018.

TV:
Master of None
After an Emmy-winning first season that touched upon various aspects of co-creator Aziz Ansari’s own life – from his experience as an Asian-American, and a child of immigrants – Master of None expands its scope with season two, releasing Friday in its entirety on Netflix. Here’s what you can expect:

“As the new season opens, Dev’s temporarily moved from New York to small-town Italy to pursue his passion for pasta-making. His experiences there set the stage for the next chapter in his journey — Dev’s dealing with challenges in his personal and family relationships, pursuing a new career opportunity, and embarking on a developing, if complicated, romance with someone very meaningful to him.”

Two of the ten episodes are set in Italy, with one even shot in the black-and-white style of the Italian neorealism period. And there’s a Thanksgiving episode that spans 30 years. Joining the cast are Alessandra Mastronardi as a woman Dev meets in Modena, and Nicolo Ambrosio as a young boy named Mario.

I Love Dick
Adapted from American author Chris Kraus’ novel of the same name, I Love Dick is a new Amazon series from the creator of Transparent, Jill Soloway, and Sarah Gubbins. Set in the city of Marfa, Texas, the show is about how a professor named Dick (Kevin Bacon) changes the lives of a struggling married couple, New York filmmaker (Kathryn Hahn) and her husband (Griffin Dunne).

The eight-episode first season uses the storytelling format of celebrated film-maker Akira Kurosawa in Rashomon (1950), by inter-cutting between different points of view, and exploring three stories in one – the undoing of a marriage, the emerging of an artist, and the veneration of a hesitant saviour.

Early reviews point toward a favourable opinion of the show, with the San Francisco Chronicle saying though “repeated viewings may help get all the details”, it “will [not] ever leave you feeling satisfied”. Variety labelled it “a daunting show to step into, with its scathing critiques and blunt personalities”.

Movies:
Alien: Covenant
Set ten years after the events of Prometheus (2012), and eighteen before those of the original Alien (1979), Alien: Covenant follows the crew of a ship called Covenant, who are headed for a distant planet named Origae-6 with 2,000 colonists and over 1,500 embryos on board. When they receive a mysterious transmission from a nearby planet, the captain decides to change course and investigate, despite protests.

Ridley Scott, the man behind the Alien franchise, returns as director for what is the second prequel instalment, and the sixth overall. The film stars Michael Fassbender playing two android look-alikes, David and Walter, Katherine Waterston as Daniels, Billy Crudup as captain Oram, Danny McBride as pilot Tennessee, Amy Seimetz as Faris, and Demián Bichir as head of security Lope.

With Prometheus’ high-minded narrative failing to resonate with fans, Scott returns to his horror roots on Covenant, giving us tons of scares in the process. As we said in our review, there’s still remnants of its predecessor’s wish to explore philosophical quandaries, which makes the film feel stuck between two opposing ideas.

How to access: Out in cinema halls
Time commitment: 2 hours and 3 minutes

Manchester by the Sea
In director Kenneth Lonergan’s story about Lee Chandler (Casey Affleck), a man with a troubled past, Lonergan explores the process of grieving, and the scars it can leave behind. After the death of his older brother Joe (Kyle Chandler), Lee is forced to move back to the New England town of Manchester-by-the-Sea, to reluctantly serve as the sole guardian for his 16-year-old son Patrick (Lucas Hedges).

With that, he must confront the past he ran away from, including his wife Randi (Michelle Williams), and the community he was born in. Manchester by the Sea is a truly affecting film, which delivers a poignant telling of the struggle to come to terms with a tragedy, especially when it’s forced upon you.

Affleck delivers a stirring performance, which won him the Oscar and Golden Globe for Best Actor earlier this year. The film is another feather in the cap for writer-director Lonergan, who picked up the award for Best Original Screenplay.

Things to Come
“What happens when the life you’ve worked so hard to build falls apart all at once?” That was the marketing pitch for French writer-director Mia Hansen-Løve’s latest film, which draws upon her own family, since the protagonist is loosely based on her mother. Nathalie (Isabelle Huppert) is a philosophy teacher with a seemingly perfect life, but it all begins to fall apart after a surprise revelation.

After her husband of twenty-five years leaves her, Nathalie’s life starts to crumble, and she finds herself lonely. But the separation also brings a fresh sense of freedom, and the newly-single woman sets out on a journey to rediscover herself. It’s a much subtler drama than Huppert’s other great performance of last year, in Paul Verhoeven’s Elle, but just as good.

Things to Come – titled L'Avenir in its native French – premiered as last year’s Berlin International Film Festival, where Hansen-Løve picked up the award for Best Director.

How to access: Amazon US, Amazon Video US, Google Play Movies, Netflix, or YouTube
Time commitment: 1 hour and 42 minutes

Other mentions:
If you’re looking for more streaming options, check out our monthly guide for Netflix, which saw several new additions this week: new original series Anne with an E, Tom Hardy-starrer Warrior (2011), and documentary Get Me Roger Stone.

Video games:
Minecraft: Switch Edition
The second best-selling video game of all time, only behind Tetris, Minecraft is a name to be reckoned with. The game’s simple mechanics afforded players a creative freedom that modern titles tend to lack, and has helped firmly establish itself as a super-addictive game for people of all ages, more so kids than any other age group.

Minecraft has continued to expand itself in surprising new ways, delivering different gameplay modes, an extensive modding scene on the PC, and spin-off titles. The Switch Edition, available via the Nintendo eShop, is built around other console versions. It will support eight-player online or local multiplayer, and you can even do four-player split screen, in docked or table-top mode.

Mojang is giving something special to Switch owners, in the form of a Super Mario Mash-Up Pack, which includes a custom crafted Mario-themed world, Super Mario 64 soundtrack, and 40 characters from the Mario universe. In terms of performance, the Switch Edition does 720p 60fps across all modes and play types.

How to access: Nintendo Switch
Time commitment: As much as you want, really