Winslet had to hold her breath for seven minutes to film for Avatar 2. 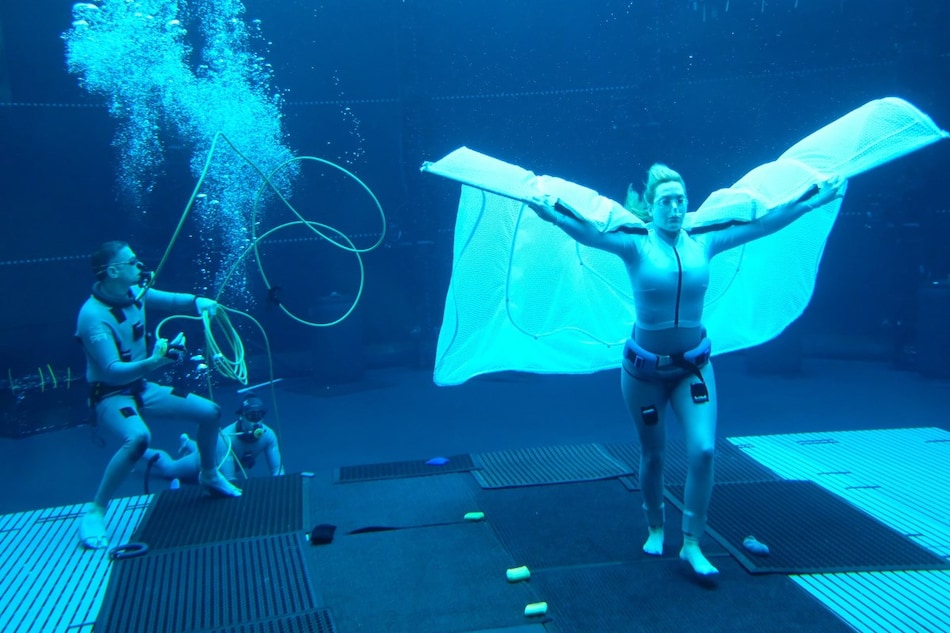 (right) Kate Winslet on the sets of Avatar 2

Avatar 2 star Kate Winslet is the face of the latest behind the scenes look at James Cameron's Avatar sequel that showcases what it takes to film underwater. Wearing weights around her waist, a nose clip to help hold her breath, and giant wings across the length of her arms, Winslet is seen walking along the bottom of a water tank that has been purpose built for Avatar 2 filming. In an interview, Winslet revealed that she trained to hold her breath for over seven minutes to maximise the time she could spend underwater.

The official social media pages for the Avatar film series released the new Avatar 2 set photo featuring Winslet — she's playing a “water person” called Ronal — on Monday. The caption, which borrows from Winslet's interview with The Hollywood Reporter in August, talks about her preparation for the Avatar 2 role: “I had to learn how to free-dive to play that role in Avatar, and that was just incredible. My longest breath hold was seven minutes and 14 seconds, like crazy, crazy stuff.”

From Kate Winslet's recent interview in @THR: “I had to learn how to free-dive to play that role in Avatar, and that was just incredible. My longest breath hold was seven minutes and 14 seconds, like crazy, crazy stuff.” pic.twitter.com/ZYAmZdNgHS

Winslet isn't the first Avatar 2 cast member to discuss underwater filming prep. Returning star Sigourney Weaver, who is playing a new character on Avatar 2, told The New York Times earlier in October that she trained with “an expert who had coached elite military divers so that she could hold her breath, after a big gulp of supplemental oxygen, for more than six minutes.”

Weaver added: “I had some concerns. But that's what the training was for. And I really wanted to do it. I didn't want anyone to think, ‘Oh, she's old, she can't do this.'” Weaver's scenes involved dives on location in the US states of Florida and Hawaii, where she “reclined on the ocean floor while manta rays glided over her.”

Avatar 2 is slated to release December 16, 2022 in cinemas worldwide.