RBI’s new rules on recurring payments via credit and debit cards might make this the more convenient option. 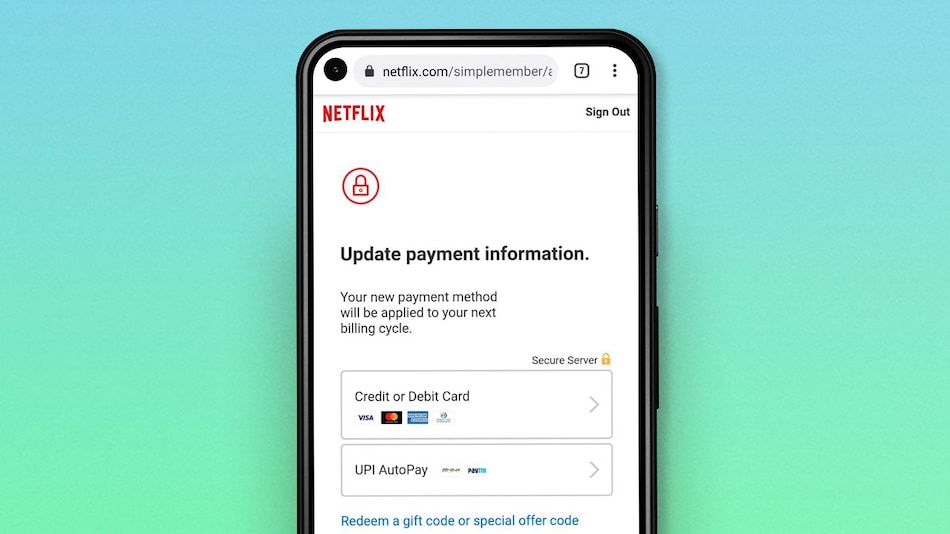 Netflix is now rolling out support for UPI Autopay payments in India that will allow you to pay for your monthly subscription by using your UPI ID — usually a name or phone number followed by “@” and your bank name or UPI provider. For instance, “gadgets360@okaxis” is a (fictional) UPI ID. The UPI Autopay feature will be first available on Netflix.com and Netflix's Android app, with both new and returning members able to opt in. If you're already subscribed, just head over to the Account section >> Billing Details, to switch to UPI AutoPay.

This is just the second form of payment that Netflix directly supports on its own platform. Before the rollout of UPI AutoPay, payments on Netflix in India were limited to supported credit and debit cards from Visa, MasterCard, American Express, and Diners Club. Alternatively, you could subscribe to Netflix via a partner, including the likes of Airtel, Jio, and Vi. The introduction of UPI AutoPay comes following a limited test ran by Netflix, Gadgets 360 has learnt.

Since this is UPI Autopay, it supports recurring transactions, meaning you won't have to worry about manually making the payment every month. Netflix might be getting ahead of the curve here, with India's central bank the Reserve Bank of India (RBI) set to impose new rules on recurring transactions from October 1, and storing of card details [PDF] from January 1, 2022. However, Netflix did not refer to the RBI's rules in its statement.

“Our goal is to give members more freedom and control over their Netflix experience — to watch their favourite stories whenever they want, all without ads,” Netflix India's payments head Gunjan Pradhan said in a prepared statement. “We hope that adding UPI AutoPay to our existing payment options — credit and debit cards, as well as integrations with Airtel, Vi and Jio — will give our members even more flexibility.”