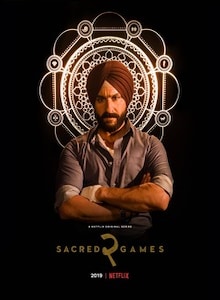 Share
Season 2
Action Adventure Crime Drama Thriller
2.6 ★ 2019 Season 2 Hindi 18+
As the clock ticks and Sartaj struggles to save Mumbai from a possible nuclear attack, he lands up at Guruji?s Ashram from Gaitonde?s past, peddled with a complex labyrinth of sex, drugs, and crime.

Season 2 picks up from the looming threat of a possible nuclear attack over Mumbai. After scuffling through Gaintonde’s (Nawazuddin Siddiqui) bunker, Sartaj Singh (Saif Ali Khan) decides to visit Guruji’s (Pankaj Tripathi) Ashram that the gangster had mentioned in the first season.

As he explores the hidden world of a spiritual cult filled with crime, sex, and drugs in the sanctorum, threads of his past begin to unfold. Meanwhile, the investigation hints towards a connection of the impending doom with a Pakistani terrorist named Shahid Khan (Ranvir Shorey).

The plot further brushes past the elements of communalism, mob lynching, fundamentalism, diabolical socio-political agendas, and mental health battles. As panic and horror take over the city, the authorities struggle to find a solution against the ticking clock. Upon its debut last year, Sacred Games was given a ringing endorsement from most Indian viewers, who believed they had finally gotten a local original series that attempted to follow in the footsteps of prestige TV era that has brought about a new age of golden television in the US. (It had its faults for sure, which we have previously documented.) Though its global success remains debatable since the Netflix ratings department doesn't have an open-door policy, Sacred Games is clearly a phenomenon in India. In turn, that means there's greater pressure on the cast and crew to deliver on the show's return, with Sacred Games season 2 out midnight on Thursday.