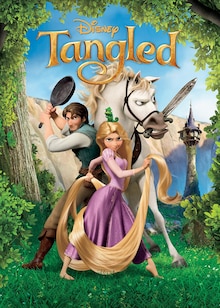 Rapunzel (Mandy Moore), a tower-bound young princess with magical long blonde hair, yearns to leave her secluded tower, where she has spent her entire life against her foster mother's wishes.

When the kingdom's most wanted and most charming bandit, Flynn Rider (Zachary Levi), arrives to hide in the same mysterious tower, Rapunzel finds him as her ticket to freedom.

The feisty young princess strikes a deal with Flynn, and together the duo set off on an action-packed escapade. On this whirlwind adventure journey, they are accompanied by a super-cop horse, an over-protective chameleon, and a gang of pub thugs.