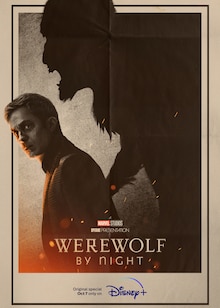 Share
Action Fantasy Horror Superhero
2.8 ★ 2022 English
The attendees of a leader's macabre memorial are thrust into a deadly competition for a powerful relic.

About Werewolf by Night TV Special

It's a dark and sombre night, and a cabal of monster hunters have gathered in a rather macabre memorial of their deceased leader, at the Bloodstone temple.

The attendees are soon thrust into a mysterious and deadly competition for a powerful relic. Little do they know that a dangerous monster awaits them.

This web television special is Marvel's first attempt to bring some of its horror-themed characters to the popular Marvel Cinematic Universe (MCU).

Werewolf by Night — out Friday on Disney+ and Disney+ Hotstar — pushes the Marvel Cinematic Universe into a new dimension. On paper at least. It's the first TV special that Marvel Studios has produced. (TV special is basically a fancy term for an hour-long movie.) The Guardians of the Galaxy Holiday Special — coming in December, also to Disney+ and Disney+ Hotstar — was set to be the first, but Werewolf by Night emerged out of nowhere last month at Disney's D23 Expo 2022. More importantly, Werewolf by Night is also the first full-on MCU horror flick, though we sort of went there with the Sam Raimi-directed Doctor Strange in the Multiverse of Madness, starring Benedict Cumberbatch and Elizabeth Olsen, earlier this year.