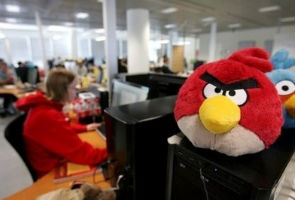 Highlights
Angry Birds has picked up a Webby Award to go with its millions of addicted fans.

The Angry Birds iPhone application from Finland's Rovio was named Best Mobile Game as the winners of the 15th annual Webby Awards were announced in New York on Tuesday.

Angry Birds was also named the winner of the People's Voice award determined in an online vote.

Other Webby Award winners included teen pop star Justin Bieber, in a comedy category, Arcade Fire for their "The Wilderness Downtown" video and The New York Times, which picked up awards in the How-To, Travel and Mobile categories.

Comedy website Funny or Die scooped up eight awards. Actor Zach Galifianakis was among the winners for his mock talk show "Between Two Ferns."

Social news iPad application Flipboard won awards in the News and Social categories and check-in application Foursquare was tapped for best use of GPS and location technology.

The advertising agency Wieden + Kennedy won a Webby Award for its popular video campaign starring Isaiah Mustafa as the "Old Spice Guy" and was also named Agency of the Year.

"This year's Webby Winners exemplify the type of profound effect the Internet is having on popular culture and the world at large," Webby Awards executive director David-Michel Davies said.

"From Arcade Fire's reinvention of the music video format with The Wilderness Downtown, or the New York Times coverage of revolution in Egypt and the Middle East, the Internet is the driving force of change in the world today," he said.

Webby Award winners will be honored at a ceremony in New York on June 13, where they will be allowed to deliver speeches of five words or less.

The awards are bestowed by the New York-based International Academy of Digital Arts and Sciences.

Nokia Chairman to quit next year
TRAI Report: How many mobile subscribers does India actually have?