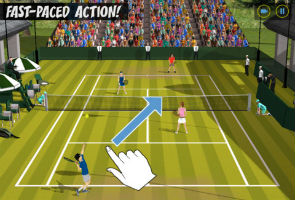 The 8th edition of the IMGA awards was held on the sidelines of the recently concluded Mobile World Congress in Barcelona. The game won ahead of tough competiton from 29 other titles like Bike Baron, Sports Car Challenge, Touchgrind BMXand Trial Xtreme 2 etc. Flick Tennis: College Wars won by receiving more votes from the global audience on the iMGA website than its peers.

The game Flick Tennis: College Wars combines sports-based gaming with a storyline in a nice touch. The game is in the form of a comic book - as a college tennis player, you go through the ups and downs and all the emotions of winning and losing. In fact, the characters themselves are based on the psychology of the world's best tennis players.

The game is available for the iPhone as well as the iPad and has averaged over 4.5 stars rating across all versions, a worthy feat in itself.

Other titles from Rolocule Games include Super Badminton 2010 and Touch Squash: World Championship 09, both on the iOS platform.
Comments

Zombies to keep you fit? There's an app for that!
Review: Sony PlayStation Vita