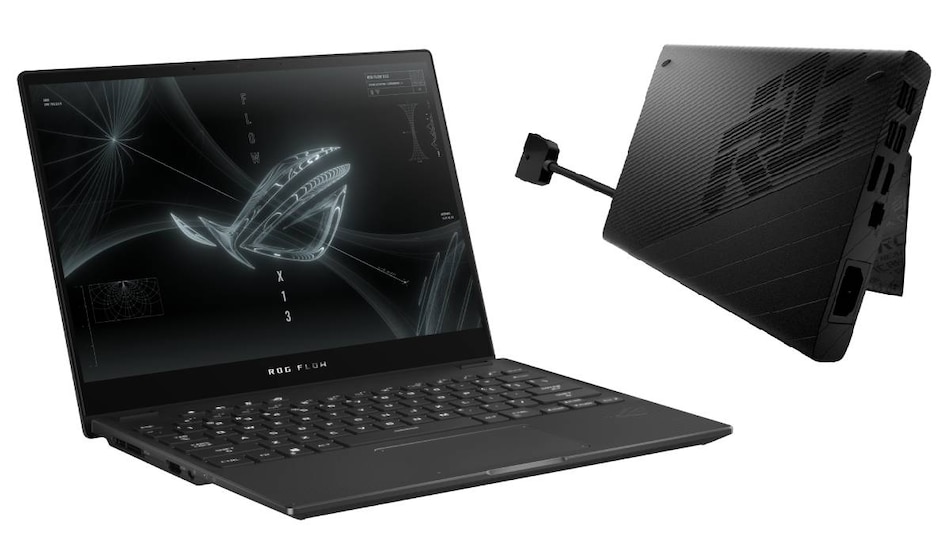 Asus has unveiled its CES 2021 Republic of Gamers portfolio, including the new ultraportable ROG Flow X13 and XG Mobile external GPU designed to match it; ROG Zephyrus Duo 15 SE with dual screens; and beefy Strix Scar 17, along with a new virtual product showcase called ROG Citadel XV. The laptops feature refreshed hardware including the newly announced AMD Ryzen 5000-series mobile CPUs and Nvidia GeForce RTX 30-series GPUs. The announcements were made at Asus' virtual CES 2021 ROG presentation. There's no word on when these products will be launched in India, but we can expect them soon.

Starting with the ROG Flow X13, this is an ultraportable 2-in-1 gaming laptop that can be paired with a new ROG XG Mobile external GPU. Featuring a Magnesium alloy body and 'gravity wave' design meant to look like running water, the ROG Flow X13 is 15.8mm thick and weighs 1.3kg, but is able to power games with a GeForce GTX 1650 GPU and up to a Ryzen 9 5980HS CPU. It features Gorilla Glass on the 16:10 touchscreen and  is available with either 4K 60Hz or full-HD 120Hz panels. Asus claims 10 hours battery life with a 62Wh battery. The unit ships with a compact 100W Type-C charger. You can get up to a 1TB Nvme SSD and 32GB of LPDDR4X RAM.

The ROG XG is a mobile external GPU designed around the new GeForce RTX 3080 laptop GPU, which can run at up to 150W thanks to a compact vapour chamber cooler. According to Asus, the ROG XG is the smallest eGPU ever, and is only 6 percent the size of typical Thunderbolt eGPU enclosure. It weighs 1kg and is said to be about the size of a book. Asus has designed a proprietary connector that uses Thunderbolt plus eight dedicated PCIe lanes for the GPU as well as an integrated IO hub. The unit has a built-in 280W power supply and will power the ROG Flow X13, eliminating the need to carry another power adapter.

Next, the ROG Strix Scar 17 is designed to be Asus' top esports gaming laptop. It has a smaller footprint than its predecessor. Unique features include an optical mechanical keyboard, a laser etching treatment on the lid resulting in different texture layers, customisable "ammo cap" hinge covers, and a translucent fibre glass material on the keyboard deck. It boasts of the latest GeForce RTX 3080 GPU with dynamic boost acoustic tuning, up to a Ryzen 9 5900HX unlocked CPU, plus up to 2TB of NVMe storage, 64GB of DDR4 RAM, a 90Wh battery with Type-C charging, and per-key RGB lighting. Screen options include WQHD 165Hz and full-HD 300Hz panels.

The ROG Strix G family has also been refreshed with three new looks, a 7 percent smaller footprint, and the same 90Wh battery and 100W Type-C adapter.

The flagship ROG Zephyrus Duo gets a Special Edition update with the same raised ScreenPad+ second screen, but new GeForce RTX 3080 GPU running at 130W with dynamic boost, a new 6-phase power design, up to an overclocked Ryzen 9 5900HX CPU, 2TB of NVMe storage, 32GB of DDR4 RAM, a 90Wh battery and Type-C charger. You can get it with a 120Hz 4K or 300Hz full-HD primary screen.

The ROG Zephyrus G15 is now 5 percent smaller and 200g lighter than before, with GeForce RTX 3080 graphics and a Ryzen 9 5900HS CPU plus a 165Hz 1440p screen. CNC-perforated matrix holes on the lid create a shimmery "nano imprint", and there's now a 20 percent larger glass touchpad plus soft-touch palm rest. A 3D mic array and 6-speaker setup with dual woofers improve audio in various situations. You can get up to 13 hours of battery life. The more compact ROG Zephyrus G14 also gets updated display options and the AniMe matrix display on the lid can be used to show a new Asus virtual assistant called Omni, which can report system performance stats.

Finally, Asus has published a new virtual product showcase called ROG Citadel XV on Steam. Users can check out 360-degree views of various ROG products and check specifications as well as customisations options, interact with the Omni assistant, and also try out a shooting range mini-game.