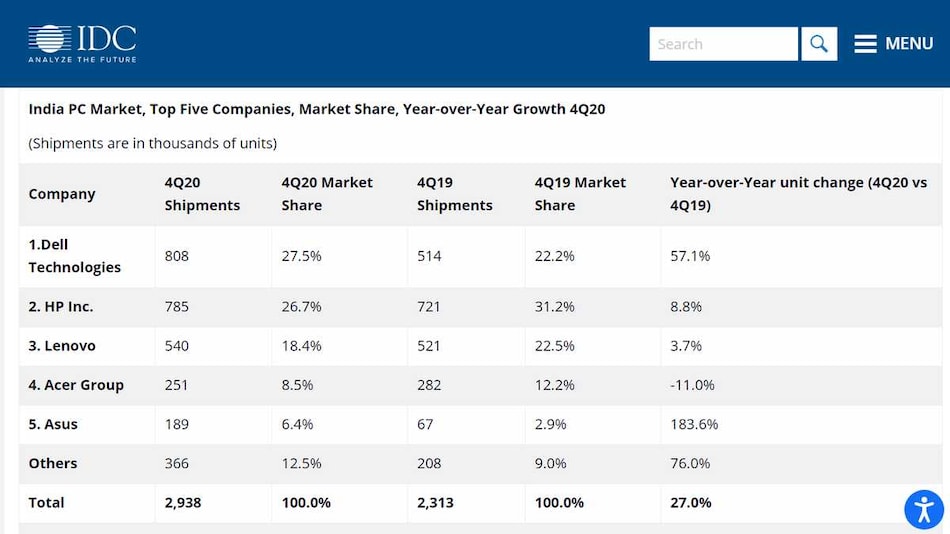 Indian PC market saw another strong quarter in Q4 2020 with a 27 percent year-on-year (YoY) growth, International Data Corporation (IDC) India data shows. Between October and December, 2.9 million PCs were shipped, making 2020 the biggest year for notebook sales with 7.9 million shipments. These numbers include shipments for desktops, notebooks, and workstations. Notebooks contributed to three-fourths of the total PC shipments in India in Q4 2020, as per the data. Dell shipped the most units in the Indian PC market, dethroning HP from Q3 2020.

The latest data published by IDC's Worldwide Quarterly Personal Computing Device Tracker shows a total of 2.9 million desktops, notebooks, and workstations were shipped in the third quarter of 2020. This was a 27 percent YoY growth compared to Q4 2019, but around 500,000 units less compared to the previous quarter of Q3 2020. Out of the 2.9 million units, three-fourths of the total shipments were notebooks and IDC says demand for e-learning and remote working can be attributed for this growth.

With a 62.1 percent YoY growth in notebooks in Q4 2020, the year became the biggest for notebooks with a total of 7.9 million units shipped throughout the year. This was a six percent growth over the previous year. Interestingly, desktop shipments dropped by 33.2 percent in 2020 compared to the previous year which IDC says was due to companies shifting focus to mobile devices.