Lenovo ThinkPad Laptops Now Fully Customisable in India via Lenovo.com, Other Models to be Included Soon

Customers will be able to pick and choose exactly what hardware they want. 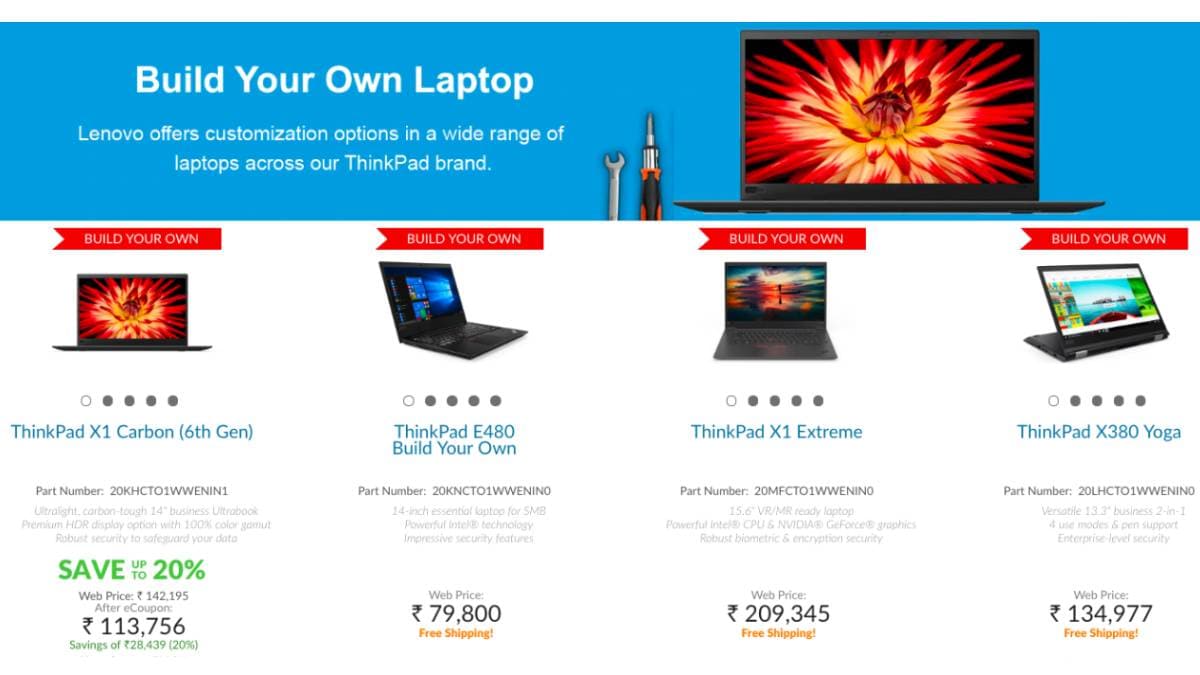 Lenovo has announced that its ThinkPad series laptops will now be available "made to order" in India, which means that buyers can fully customise multiple specifications rather than only choosing from a few pre-existing configurations. Lenovo has stated that its other brands, which include IdeaPad consumer devices, premium Yoga models, and the Legion series for gamers, will also get made-to-order options by the end of this year. The service will allow much greater flexibility for buyers, which is especially interesting since only limited ThinkPad configurations have been available to retail buyers in India in the past. ThinkPad laptops can already be customised and ordered from Lenovo's own website.

To get started choosing options, buyers need to visit www.lenovo.com/in/en/customise-to-order. At the moment, several ThinkPad base models are listed, including the premium ThinkPad X1 Carbon and ThinkPad X1 Extreme, the 2-in-1 ThinkPad X380 Yoga and ThinkPad X1 Yoga, the compact ThinkPad X280, and the more affordable ThinkPad L380 and ThinkPad E480.

Depending on the model, buyers can choose to upgrade the CPU, operating system, display, memory, GPU, webcam, and storage. Certain models, such as the slim ThinkPad X1 variants, have soldered RAM which cannot be changed, and some do not allow discrete GPUs to be selected.

Buyers can also choose to add a keyboard backlight, NFC, cellular 4G connectivity, and fingerprint reader on some models. Features such as the smart card reader can be removed if they are not useful. Some models offer dongles and adapters as well, though extra batteries and chargers, extended warranty options, docks, and accessories do not appear to be on offer at the moment.

The website will show a message if there are any incompatibilities between chosen options. Lenovo says that customised laptops will be delivered to customers' doorsteps within two weeks, though the website currently shows a lead time of over four weeks when some options are selected. Shipping is free, and there are some discounts with coupon codes on certain models.

The keyboard backlight for this model costs Rs. 1,676 extra. It's possible to remove the default fingerprint reader but it won't save any money, but ditching a smart card reader will reduce the cost by Rs. 789. Adding 4G cellular connectivity costs Rs. 10,126, and is noteworthy because this option has not been common on retail ThinkPad units sold in India before.

Yi Smart Dash Camera With a Wide-Angle Lens Launched in India, to Be Sold via Amazon