Asus has brought its latest experiment to market, and it goes on sale in India on November 10. 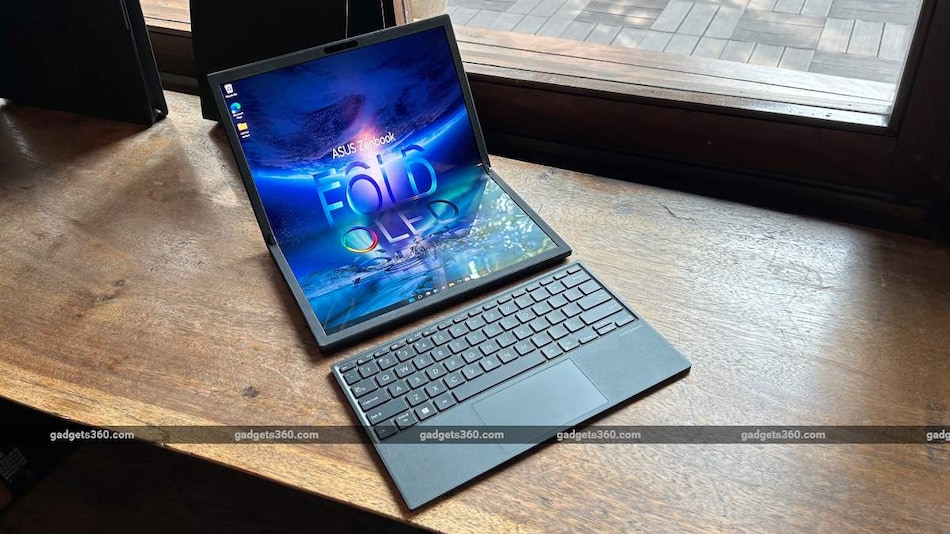 Asus is no stranger to experimenting with various shapes and sizes for its devices – this is after all the company that came up with the PadFone series, Transformer Book series, ROG Mothership, and Taichi. Some designs, such as the Project Precog dual-screen laptop, never made it past the prototype stage, while on the other hand the ZenBook Duo has spawned several similar models and has been refined over several generations. Today, we have the chance to check out another potential game-changer, the ZenBook 17 Fold OLED (UX9702), and it isn't just a concept; it's going on sale in India very soon.

Does the market really need a foldable laptop? Does a product like this solve any problem or serve any need that normal laptops cannot? These are questions that can only be answered with use over a very long period. What I can bring you today are my first impressions, after having spent just a few hours with the new ZenBook 17 Fold. Read on.

The official launch price for the Asus ZenBook 17 Fold is Rs. 3,29,000 which is of course a huge amount, but not entirely unreasonable considering that plenty of gaming laptops and even a decently specced MacBook Pro could easily cost as much or more. Only one hardware configuration will be available in India, and we'll get into that shortly.

Asus has announced a set of pre-book offers including up to Rs. 40,700 off in exchange for a qualifying laptop, and Rs. 5,000 instant cashback, so you could bring that price down to Rs. 2,84,290. You'll also get a 500GB portable SSD free, and a warranty extension (which covers the OLED panel as well as folding mechanism) plus accidental damage protection, which could be quite worthwhile. Pre-booking will be open till November 9, and open sale begins November 10 through Asus' own website.

The ZenBook 17 Fold comes in an upright wedge-shaped box, and opening it up for the first time is meant to feel dramatic. You'll see the tablet itself placed upright, and there's a compartment below it for the included 65W USB-PD charger. The separate Bluetooth keyboard, a protective sleeve, and an included USB Type-A to Type-C adapter are also nestled inside.

When unfolded, you get a 17.3-inch 2560x1920-pixel 4:3 screen. The tablet's borders are somewhat thick but this is good for grip. Asus also says this discourages people from folding the device by pressing inwards on the screen with their thumbs while bending the body – and once that was pointed out, I immediately became aware that I needed to consciously avoid doing so. The screen surface does feel a bit soft and pliable, but that said, I was less anxious of causing damage than I have been when using a Samsung Galaxy Z Fold, for instance.

The keyboard unit snaps in place over the lower half of the display, and Windows 11 resizes its active area automatically

There are multiple ways to use the ZenBook 17 Fold. It could be a huge tablet, but I'm not sure how comfortable that would be long-term especially since it does need a cooling fan. It's a better idea to flip out the kickstand (that's integrated into the hinge shroud) and place the Bluetooth keyboard in a comfortable spot. You can also bend the screen slightly and hold it like a book. Then there's the “standard” laptop mode, with the keyboard snapped in place magnetically over the lower half of the screen, leaving you with a roughly 12.5-inch, 1920x1280 display area (though the bottom of that curves downwards and forwards). If you prefer, pull the keyboard off and use the entire screen in a curved portrait orientation, with a virtual keyboard popping up when needed.

The ZenBook 17 Fold weighs 1.5kg (1.8kg including the Bluetooth keyboard) which is not too bad by today's standards, if you consider you're getting a device with a 17-inch screen to work on. The keyboard layout is quite standard and key travel and spacing are decent, but its position and height might be awkward long-term. The trackpad is quite usable. I'm concerned about the keyboard unit flexing though, and it's a pity that it needs to be charged using a USB Type-C cable – there are no contact points. I'm also surprised that a stylus isn't included.

There's no doubt that the ZenBook 17 Fold is a thick, chunky device when closed – not like any of the wide, slim laptops on the market today. It feels like carrying a leather-bound encyclopedia volume or a really hefty planner. The hinge housing wraps around the outside like an extra protective shell, but asus has used glass and metal for the actual rear surfaces (or bottom surfaces, depending on how you use this device). The screen curves in the middle and doesn't fold completely flat, but if you place the Bluetooth keyboard in between, you get a neat sandwich with no gaps – which is also great for avoiding damage.

Asus says the hinge has been tested for 30,000 open-and-close cycles which exceeds even military toughness standards. The ZenBook 17 Fold is also designed to withstand vibrations, shock, humidity, and extreme temperatures. Yes, the crease down the middle is visible when the 17.3-inch OLED panel is fully unfolded, but it's only distracting at some angles and will depend on what you're doing.

The 17.3-inch OLED panel has a 2.5K 1920x1280 resolution and 4:3 aspect ratio, plus Dolby Vision and DisplayHDR True Black certification

On the inside, you get a 12th gen ‘Alder Lake' Core i7-1250U CPU which has two performance cores and eight more efficiency cores, plus integrated Iris XE graphics. A fan is required for active cooling but the vents are placed such that they'll never be blocked in tablet or laptop mode. In fact, the quad speakers and two Thunderbolt ports are also positioned so that they're always accessible.

There's also a 75Wh battery, and the ZenBook 17 Fold can be charged using a 65W USB-PD power bank if needed. The 16GB of LPDDR5 RAM is soldered. Surprisingly Asus has used a standard 1TB PCie 4.0 M.2 SSD module, though you certainly should not attempt to open up this device to upgrade it yourself. There's also Wi-Fi 6E and Bluetooth 5.2. Finally, the 5-megapixel webcam is worth mentioning.

There's plenty more to talk about, including Asus' software tweaks. The most important thing, though, is how it will feel to actually use the ZenBook 17 Fold long-term as a laptop for everyday work and entertainment. Handling it will take some getting used to, but I do see the appeal. When out and about with my 13.3-inch laptop, I've often wished I could see more spreadsheet columns or work across two programs side by side. Then there's also its potential for entertainment – catching up on shows while on long flight, for example.

Will all laptops eventually go the way of smartphones and ditch physical keyboards? Is the ZenBook 17 Fold the best of both worlds, or is it just another niche toy? If you do choose to be an early adopter just because it's cool, will you be able to get all your work done? We're going to explore all of this in our full review, plus of course we'll put the ZenBook 17 Fold through all our usual tests. Stay tuned to Gadgets 360 for a full examination, coming up very soon.