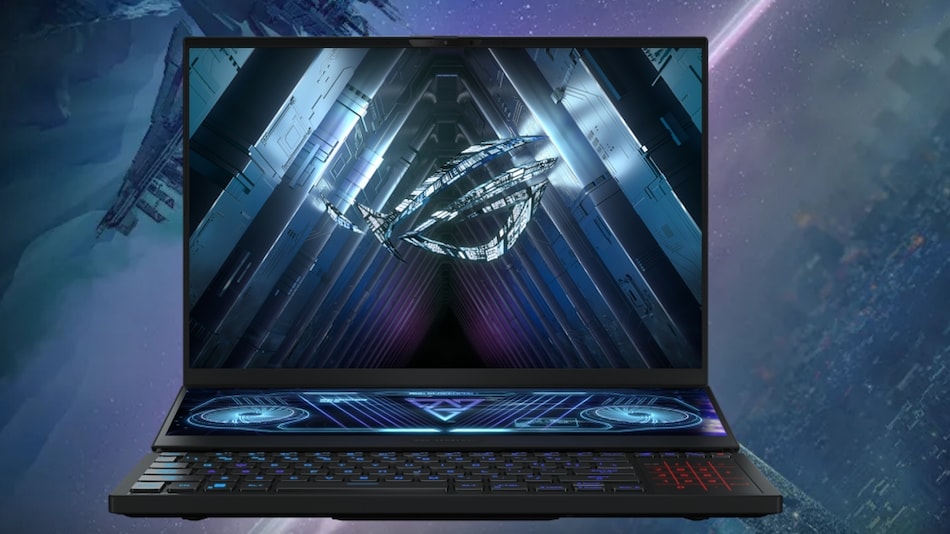 All the models are currently available for purchase via the Asus online store, Amazon, Flipkart and other offline retail stores.

The Asus ROG Zephyrus Duo 16 has a dual display design. The ROG Nebula Display panel supports Dolby Vision HDR, Adaptive Sync, 500 nits of peak brightness and is Pantone-validated with 100 percent coverage of the DCI-P3 colour gamut. The second 14.1-inch touchscreen display offers support for up to 4K resolution. Both displays support up to 100 percent coverage of the sRGB colour gamut and 400 nits of brightness with Touch and Stylus input.

Asus has equipped ROG Zephyrus Duo 16 with an AMD Ryzen 9 6900HX processor and up to Nvidia GeForce RTX 3080Ti series GPUs. It has up to 32GB of DDR5 RAM and up to 2TB of storage. The company has packed the laptop with a new cooling system with 84-blade Arc flow fans and conductonaut extreme liquid metal compound on the CPU that is claimed to reduce CPU temperature by 15 degrees compared to regular thermal paste solutions.

Users also get an IR camera for Windows Hello face recognition on the new Asus ROG Zephyrus Duo 16. The USB Type-C port on the laptop's right edge will be USB4 capable with a software update available later this year to unify USB Type-C and Thunderbolt protocols to deliver new computing experiences with faster data transfer speeds. Besides, it packs 90Whr battery and supports 100W fast charging via the USB Type-C port.

The hardware specifications of the Asus ROG Flow X16 include up to AMD Ryzen 9 6900HS CPU, and up to Nvidia GeForce RTX 3070 Ti GPU. The device support Ray Tracing technology for improved graphics. It packs 64GB of DDR5 RAM, and 1TB of NVMe storage. There's a 90Wh battery, stereo speakers with Dolby Atmos, Wi-Fi 6E and Bluetooth 5.2.

The ROG Zephyrus G14 has been refreshed with up to AMD Ryzen 9 6900HS CPU, paired with up to AMD Radeon RX 6800S GPU. The laptop is equipped with 1TB of PCIe SSD storage and 8GB of DDR5 RAM. It features a 14-inch ROG Nebula display with a 16:10 aspect ratio of up to 500 nits. For smooth gaming, the display is claimed to deliver a response time as low as 3ms. It has Dolby Vision support with 100 percent coverage of DCI-P3 colour gamut and Pantone Validation. It runs on Windows 11 Home out-of-the-box.

The ROG Zephyrus G14 has 4.7mm side bezels and a 91 percent screen-to-body ratio. For cooling, Asus has added Vapor Chamber and liquid metal on both the processor and the GPU. It has a Mux (multiplexer) switch to reduce the latency rate. Further, the laptop houses a 76Wh battery.

The Asus ROG Zephyrus G15 and ROG Flow X13 have been refreshed with the Ryzen 9 6900HS processor, along with an Nvidia GeForce RTX 3080 Ti GPU for improved performance for the Indian market. The gaming-focussed laptops run on Windows 11 Home out-of-the-box.

The ROG Flow X13 sports Nvidia GeForce RTX 3070 Ti GPU and can support up to AMD Radeon RX 6850M XT. Users can also choose from a 4K ultra HD display or a 120Hz full-HD display options. The X13 has a 360-degree hinge and the display comes with Corning Gorilla Glass protection. It packs an integrated fingerprint sensor as well. The ROG Flow X13 has a 62Wh battery.