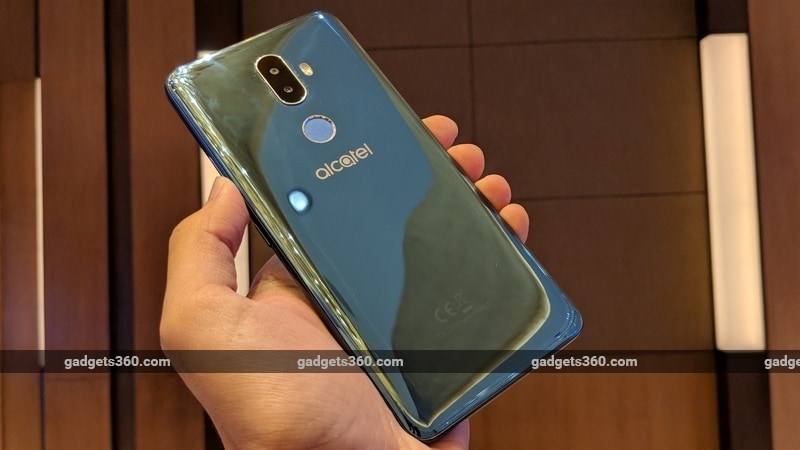 Alcatel 3V has been launched in India, at an event in New Delhi on Tuesday. The smartphone was first unveiled at CES 2018, before being launched at MWC 2018. Alongside the Alcatel 3V, the TCL-owned brand had announced several other phones at the two trade shows, including the Alcatel 1X, Alcatel 3, Alcatel 3X, and Alcatel 5. None of the above handsets have made it to India alongside the Alcatel 3V. The highlight of the budget smartphone is its large 18:9 display, its dual rear camera setup, and its front flash. The smartphone is exclusive to Flipkart in India.

The Alcatel 3V price in India has been set at Rs. 9,999, and it will go on sale via Flipkart from Thursday. There is a Jio instant cashback offer of Rs. 2,200 with the smartphone, and Jio users will also get gift vouchers up to Rs. 1,000 from Myntra, and gift vouchers up to Rs. 500 from Cleartrip. In addition to this, other launch offers include an extra Rs. 1,000 off on exchange, no-cost EMIs from HDFC Bank, and 15 percent discount on ALT Balaji subscription. It also ships with a protective transparent cover in the box.

The Alcatel 3V bears a dual rear camera setup with a 16-megapixel primary sensor and a 5-megapixel depth sensor, coupled with flash. On the front, it has an 8-megapixel sensor coupled with a flash module. Notably, the camera specifications were improved for the India launch. Camera features include Bokeh, EIS, PDAF, ZSL, Face Beauty, a Social Mode, and Instant Collage, amongst other features. It also offers Face Key - the company's name for face recognition based unlocking. It offers 32GB of inbuilt storage (global variant had 16GB storage) that's expandable via microSD card (up to 128GB).

Connectivity options on the Alcatel 3V include 4G VoLTE, Wi-Fi 802.11 a/b/g/n, Bluetooth v4.2, GPS/ A-GPS, Micro-USB 2.0, and 3.5mm headphone jack. It measures 162x76x8.05mm. Sensors on board include accelerometer, ambient light sensor, digital compass, gyroscope, and proximity sensor. It bears a fingerprint sensor on the rear panel, and a 3000mAh battery.