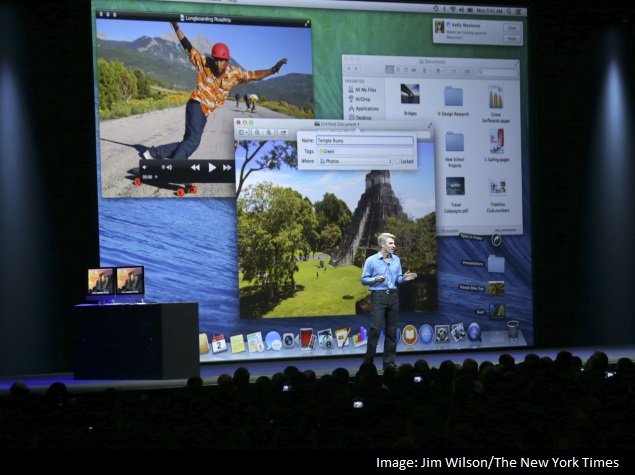 Apple on Monday introduced new operating systems for its Mac computers and mobile devices, including a series of changes intended to help Macs work more seamlessly with iPhones and iPads.

The new Mac system, called Yosemite, includes a new design that streamlines the toolbar for using the computer's calendar, clock and calculator. It also includes new icons. The new mobile system, iOS 8, adds functions like a smarter keyboard and new features for emails and text messages.

The announcements were made at the company's annual software developer conference here. Apple also introduced a system called Continuity, which makes it easier to juggle content across different devices. For example, a user can connect a Mac and an iPad, making it possible to compose an email on a Mac, and then swipe up on the iPad screen to resume writing the same email. A phone conversation on an iPhone can be transferred to a Mac, too.

The company's iCloud online storage service received some attention, too. The company said it was adding a new feature called iCloud Drive, which allows users to store files online and access them across different devices, similar to the service offered by Dropbox, a startup based in San Francisco.

"Apple engineers platforms, devices and services together," Timothy D. Cook, Apple's chief executive, said in front of thousands of software developers at Moscone Center. "We do this so we can create a seamless experience for our users that is unparalleled in the industry."

In iOS 8, the mobile device keyboard has been expanded to improve what is called predictive-typing suggestions. When a user is typing, the keyboard tries to predict the next word the user will type to help save time. It can also predict responses to incoming messages - for example, if a spouse asked, "Do you want to go to dinner or a movie?" the messaging app will provide potential responses to pick from: Dinner, a movie, or "I don't know."

Apple also updated the messaging system to make it quicker to respond to text messages. When a text arrives, the message will pop up on the top of the screen; the user can simply swipe down to type a response rather than open the texting app.

The company also announced a new health-monitoring app for iOS 8, HealthKit. The app logs statistics like a user's footsteps, heart rate and sleep activity. The app will be able to pull data from third-party fitness and health-monitoring hardware.

Apple said it would allow makers of health-monitoring apps to integrate tightly with HealthKit. For example, the Mayo Clinic has retooled its app so that if a patient's vital signs, like blood pressure, seem concerning, HealthKit can notify the hospital proactively so that a doctor can reply to the patient.

The introduction of HealthKit was low-key compared to Apple's other announcements. But the software is likely a precursor to Apple's coming smart watch, which has a strong focus on health monitoring, according to multiple people briefed on the project, who asked not to be named because the plans were private.

The new Mac system and iOS 8 will release as free updates in the fall.

Fans and customers anticipating new iPhones or a smart watch will have to wait - Apple did not introduce any new hardware Monday. The company has traditionally reserved fall and winter for its biggest product announcements to target the back-to-school and holiday shopping seasons.

Still, Apple has not been shy about building hype around its coming products. Eddy Cue, the company's senior vice president of Internet software and services, said at the Code conference last week that the products Apple is poised to release this year were part of "the best product pipeline" he has seen in his 25 years at the company. New iPhones with larger screens, iPads and a smart watch are expected for release later this year.

On Monday, though, the focus was more on developers, and Cook and his team outlined a host of new features for them. Cook said the new tools would help developers "make things they haven't dreamed of and to push to a whole new level."

App developers will now be able to take advantage of the fingerprint sensor on the latest iPhones for things like letting people log into their apps. Craig Federighi, the company's senior vice president of software engineering, who delivered most of the keynote presentation, said developers would not gain access to the fingerprints themselves - a user's fingerprints will remain securely stored inside the iPhone's processor, he said.

Apple also introduced HomeKit, a set of tools for developers to make iPhones more tightly integrated with the smart home, or wirelessly controlled home appliances like light bulbs, thermostats or door locks. One tool will allow Apple's voice assistant, Siri, to communicate with these devices - saying "Get ready for bed" could dim the lights, close the garage door and lower the thermostat, for example.

Developers at the event Monday expressed excitement about Swift. Miguel Rodriguez, a developer for Noma Systems, which makes apps for fashion brands like Zara, said he found the Apple event impressive, and was especially interested in the programming language.

Rodriguez said Swift contained some features that the current programming language used by Apple, Objective-C, had lacked. But, he said, the new language is "still familiar and it still looks the same."

Matt Craig, head of technology for The Foundry, a 3-D effects software company, said he thought Swift would be extremely important for his line of work. "For me, the new language is huge," he said.

The Best Apps and Sites That Turn YouTube Into a Jukebox for Your PC, Android or iOS Devices
10 Big Changes in OS X Yosemite