Lenovo Z6 Pro, K10 Note, A6 Note Launching in India on September 5: All You Need to Know

Lenovo Z6 Pro was introduced in April this year as the company’s flagship phone. 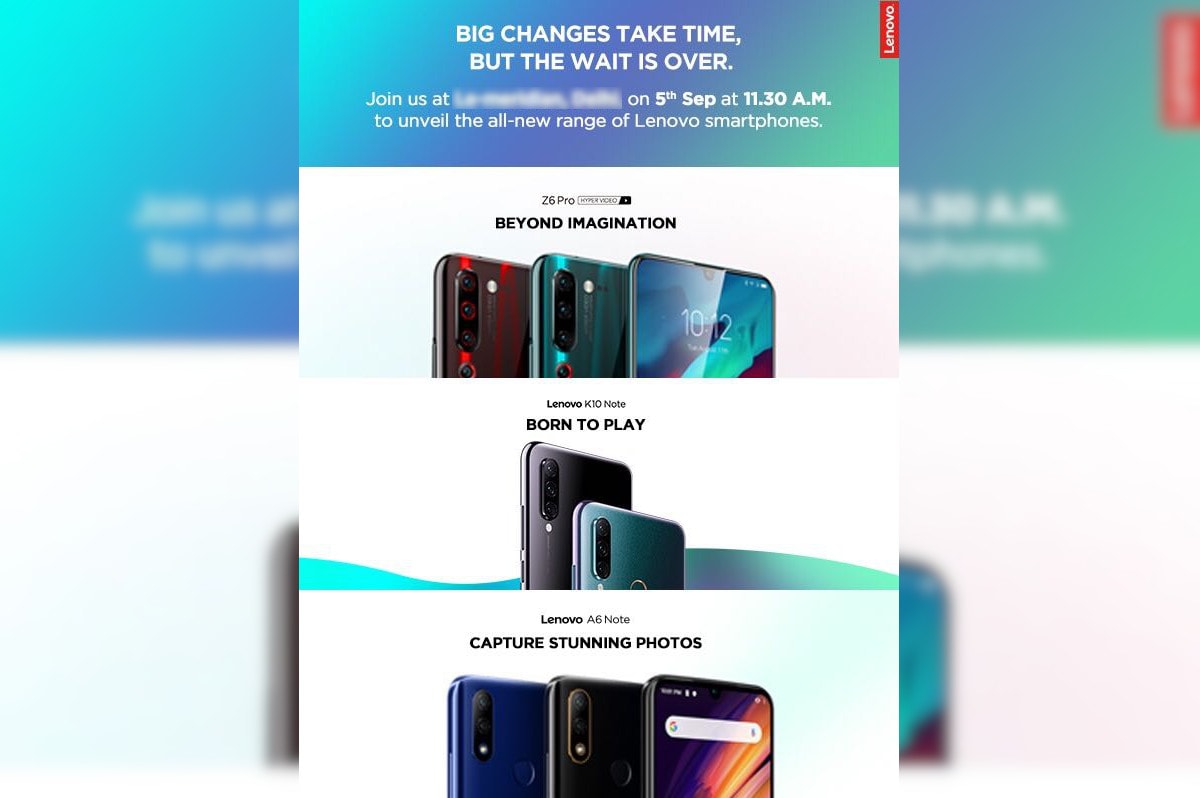 Lenovo has revealed that it is hosting a press event on September 5 in India, where the company will launch its Z6 Pro smartphone. Additionally, it will be unveiling the new K10 Note and the A6 Note smartphones at the same event. While the Lenovo Z6 Pro has already been introduced in the Chinese market as the company's flagship model, India will be first to get the Lenovo K10 Note and A6 Note. The company has not shared any other details at this point; however, the invite image has revealed the presence of a triple rear camera setup and a rear fingerprint sensor on the Lenovo K10 Note. Similarly, Lenovo A6 Note is seen packing dual rear cameras, waterdrop-style notch, and a rear fingerprint sensor.

To recall, Lenovo had unveiled the Z6 Pro in April this year. The smartphone features a 6.39-inch AMOLED display with DC Dimming and HDR 10 support. The phone is powered by Qualcomm Snapdragon 855 SoC, paired with up to 12GB of RAM and 512GB of onboard storage.

Lenovo Z6 Pro packs a quad camera setup that houses a 48-megapixel primary shooter, a 16-megapixel wide-angle-camera, an 8-megapixel telephoto camera, and a 2-megapixel shooter. There is a 32-megapixel selfie shooter onboard as well. Other specifications include 4,000mAh battery with support for 27W fast charging and Android 9 Pie.

Lenovo K10 Note and A6 Note specifications are a mystery at this point, however as mentioned earlier, the invite has revealed the presence of a triple rear camera setup with an LED flash on the Lenovo K10 Note. A rear fingerprint sensor can also be seen in the invite. The phone is likely to be offered in two colour variants, as seen in the invite. Lenovo A6 Note will sport a waterdrop-style notch, dual rear cameras, and a rear fingerprint sensor. The two colour variant of the phone have also been teased in the invite.