Microsoft Lumia 730 Teased With Selfie Ahead of September 4 Launch 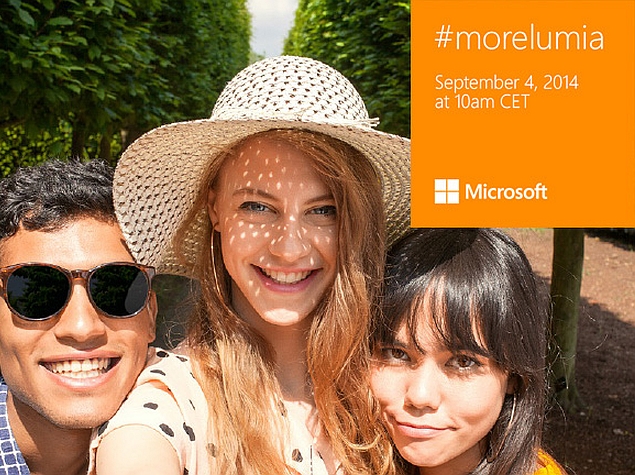 Microsoft has published a new teaser invite for its IFA 2014 event, where it is expected to showcase its much-anticipated but as-yet-unannounced selfie-focused Lumia 730 smartphone.

The company teased the invite on its Conversations blog, with the caption 'Ready for #MoreLumia?", along with a group selfie of three users. The image also states "September 4, 2014 at 10am CET" on the top right corner, with a countdown to a live webcast from the Berlin event.

It is worth noting that the Redmond firm's first teaser for its Nokia Lumia 730 smartphone last month also showed an orange-themed image that said, "Ready for more" and "Join us for more face time."

In July, Microsoft's rumoured selfie-focused smartphone was also reportedly shown off at an internal company meeting by Stephen Elop.

In the meanwhile, Phonearena claims to have obtained images of the Lumia 730 Dual SIM as well as what appears to be its single-SIM LTE variant, the Lumia 735 4G.

Last month, the rumoured Lumia 730 was leaked by a Vietnamese retailer - tipping the handset's design, pricing, and specifications.

According to the leaked specifications, the unannounced Lumia 730 is likely to feature a 4.7-inch HD display and will come with dual-SIM support. Under the hood, the anticipated selfie-focused handset is expected to be powered by a Snapdragon 400 processor alongside Adreno 305 GPU and 1GB of RAM.

Further, the Vietnamese retailer claimed that the rumoured Lumia 730 would sport a 6.7-megapixel rear camera and would feature a 5-megapixel front-facing camera that will be the highlight of the rumoured device.

The Vietnamese retailer had also leaked an image that appeared to be orange-themed promotional material for the rumoured Lumia 730, which seems reminiscent to the official orange-themed official invite.

In addition to the rumoured Lumia 730, Microsoft is also said to be working on another Lumia smartphone, dubbed Lumia 830 - a 5-inch smartphone that may also be launched at the event.

Sony Tipped to Launch 3 Smartphones, 2 Wearables and a Tablet at IFA
Moto G Goes Out of Stock in India; Successor Spotted Arriving