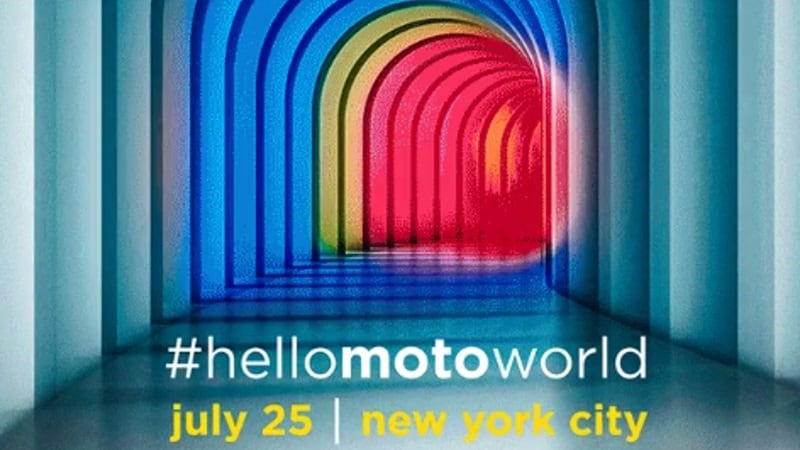 It seems like we might soon see some new Moto-branded devices as Lenovo has started sending out invites for a Moto launch event in New York City on July 25. The company has given no clues about the event and the smartphones that might be unveiled, but only mentioned that it will be a Moto event and will be organised later this month.

In its launch invite, shared by The Verge, the company has used the hashtag '#hellomotoworld' and used the tagline "you won't want to miss this." The invite has the mention of 'Motorola' as well but as mentioned before, there is no specific indication about any smartphone unveiling.

However, recently Lenovo's upcoming Moto X4 smartphone was comprehensively leaked and there is a slight chance that the company might unveil the handset at its NYC event. Other smartphones that can possibly be launched at the event could be the Moto Z2 and Moto Z2 Force. While both these smartphones are expected to pack a Snapdragon 835 SoC, the Moto Z2 Force is expected to feature a ShatterShield screen as well.

VentureBeat's Evan Blass reported that the Moto X4 will be unveiled in fourth quarter this year, citing a person with knowledge of the company's plans. In terms of specifications, the Moto X4 has been said to come with an aluminium body and pack a 5.2-inch full-HD display. The recently leaked render of the Moto X4 further suggests that the phone might come with a curved screen.

The highlight feature on the smartphone is its dual camera setup on the rear end with an 8-megapixel and another 12-megapixel sensor. The phone also features a 16-megapixel camera at front for taking selfies, as per the report. The Moto X4 has been tipped to come with IP68 water and dust resistance rating as well as a fingerprint scanner at the front that allows users to unlock the device as well as provides other navigation controls as well.

The upcoming Moto X4 is said to run Android 7.1 Nougat and powered by an octa-core Qualcomm Snapdragon 630 SoC clocked at 2.2GHz coupled with 4GB of RAM. The smartphone has been tipped to come with 32GB of built-in storage and house a 3000mAh battery. Notably, the Moto X4 is expected to be the first non-Google smartphone to support the search giant's Project Fi MVNO service that allow users to switch seamlessly between the different carriers.