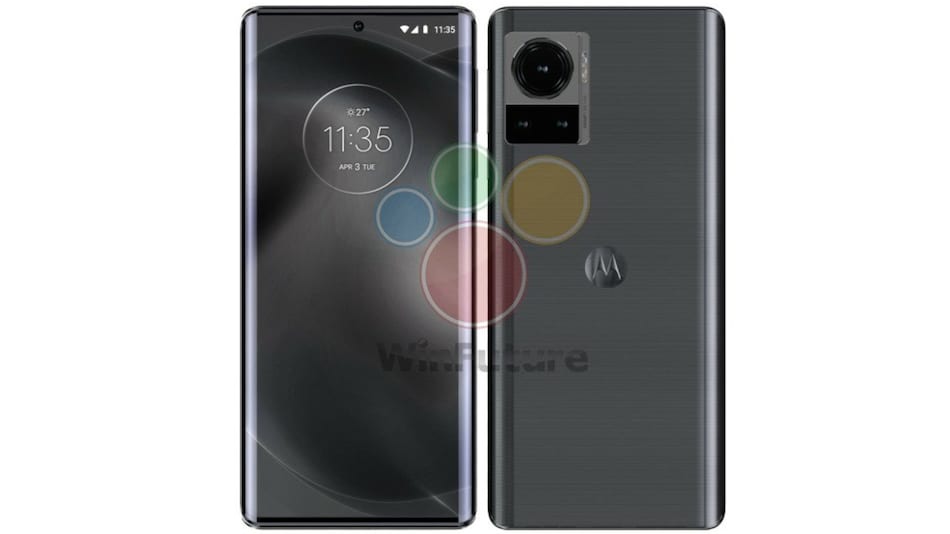 Motorola is reportedly working on a new flagship smartphone codenamed 'Frontier 22'. The handset is yet to be officially confirmed by the Lenovo-owned company, but some renders along with specifications of the phone have now surfaced online. The leaked renders of the rumoured Motorola phone show a hole-punch display and triple rear camera unit. Motorola Frontier 22 is tipped to debut in July 2022. The handset is said to feature a 144Hz refresh rate display and a fingerprint scanner for authentication. It is also expected to sport a 4,500mAh battery with 125W wired charging and 50W wireless charging support.

German publication WinFuture.de has leaked the renders, and specifications of rumoured Motorola smartphone. As mentioned, the renders show a centrally placed hole-punch cutout on the display. Further, the handset is seen carrying a triple rear camera unit along with the LED flash.

As per the leak, the anticipated Motorola Frontier 22 dual-SIM (Nano) smartphone will run on Android 12 out-of-the-box. It is said to feature a 6.67-inch full-HD+ OLED display with a 144Hz refresh rate, and DCI-P3 colour gamut. The display could have HDR10 support as well.

The upcoming Motorola handset is said to feature Qualcomm's Snapdragon SM8475 processor under the hood. According to the report, the chipset could be Snapdragon 8 Gen 1 “Plus” SoC. The device is expected to pack up to 12GB of LPDDR5 RAM and up to 256GB of UFS 3.1 storage. The handset could be available in three RAM and storage configurations — 8GB RAM + 128GB storage, 8GB RAM+256GB storage, 12GB RAM +256GB storage.

For optics, Motorola Frontier 22 is tipped to carry a triple rear camera unit that includes a 200-megapixel main sensor with optical image stabilisation (OIS), 50-megapixel wide-angle sensor, and a 12-megapixel telephoto shooter. For selfies, Motorola is said to provide a 60-megapixel camera on the upcoming smartphone.

Connectivity options in the handset reportedly include Wi-Fi 6E, USB Type-C port, NFC, GPS and Bluetooth v5.2. It is expected to include stereo speakers and three microphone arrays.

Motorola Frontier 22 is tipped to come with a fingerprint sensor as well. Motorola could pack a 4,500mAh battery with 125W wired charging and 50W wireless charging support in the latest handset.