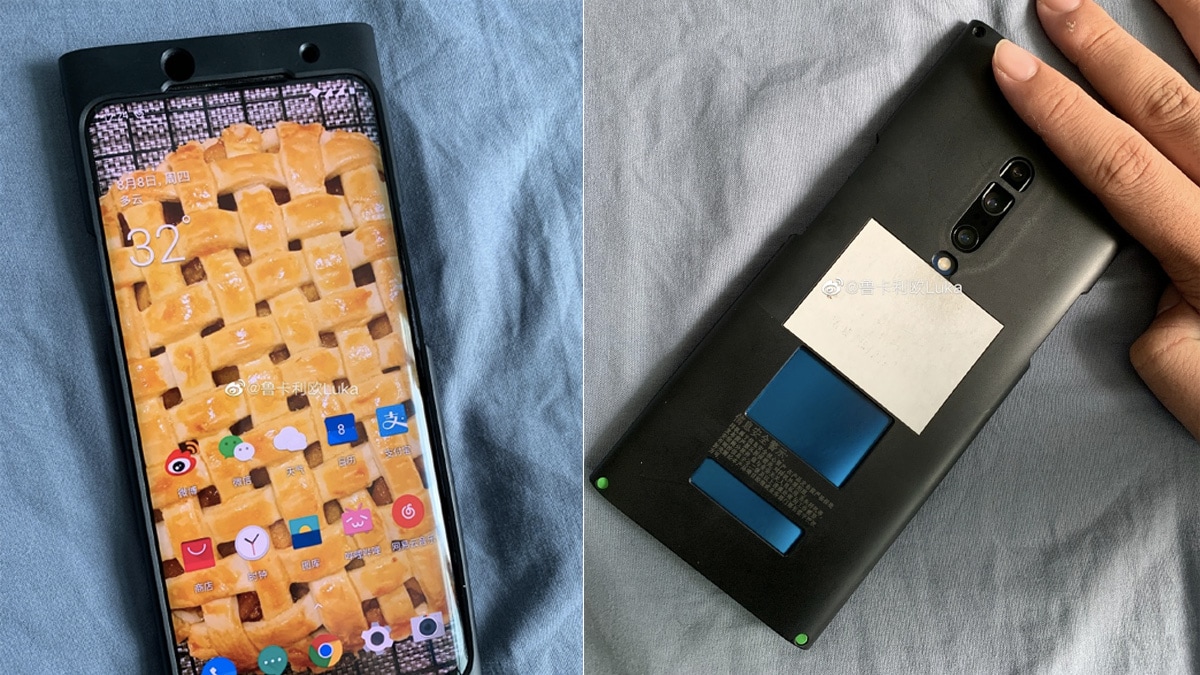 Ever since the OnePlus 5T, OnePlus has continued its two-flagship a year cycle and we expect this year may be no different. A new batch of photos have now leaked on Weibo, which show an alleged OnePlus 7T Pro in the flesh. It shows the phone in an oversized case, probably to mask the look of the phone. A similar live photo was leaked a few days back, which also showed a supposed OnePlus 7T Pro in a black plastic case.

The new images, which are circulating on Chinese chat platform Weibo, show the front and the back of the phone. The front shot shows the homescreen of what looks like OxygenOS and no notch of hole-punch, which means it should definitely be the next version of the OnePlus 7 Pro. Above the display, we have two cutouts for what seem to be camera cutouts. However, it could simply be to mask the fact that the phone has a pop-up selfie camera. The case looks like the same one which leaked a few days back.

The second image shows the back of the phone, with cutouts for the three rear cameras, which look unmistakably like the OnePlus 7 Pro (Review). There are two larger cutouts below, which show the body of the phone. This one seems to have the Nebula Blue colour. The person shooting the photo also seems to be deliberately blocking the top of the phone, possibly to hide a new feature or a fourth camera.

Beyond this, we still have no information about the specification or if it will have any new design changes. One obvious change could be the inclusion of the new Snapdragon 855 Plus SoC, which was recently announced. Another new conclusion could be a long-awaited IP rating for the phone. We could see a change in camera sensors too. There is a good chance that OnePlus could swap out the primary 48-megapixel sensor with the new Samsung 64-megapixel sensor, which is slated to debut with Realme's upcoming flagship.

Based on past 'T' variant launches, we could expect the OnePlus 7T Pro to arrive sometime in November. Right now, there's no news about a OnePlus 7T, but we're still a few months away so we're sure some news should pop up soon if this is the case.

Google Flights Gets Price Guarantee for Limited Period, Other New Features
Motorola to Launch New Phone on August 23 in India, Expected to Be Motorola One Action