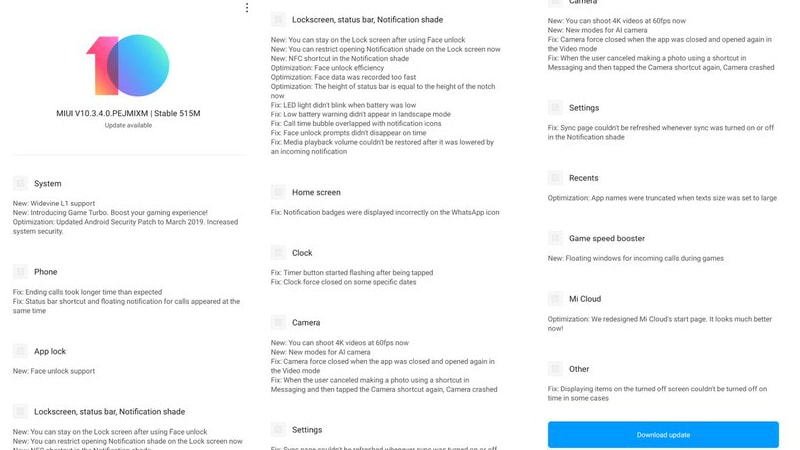 Poco F1 users are getting the MIUI 10 3.4.0 Stable ROM update, with the biggest change definitely Widevine L1 support. After testing it for a brief period, Xiaomi has confirmed it is now rolling out Widevine L1 support for Poco F1 users. This means that users will be able to stream Amazon Prime and Hotstar in HD, after they install the latest update. With the update, Poco F1 users are getting 4K recording at 60FPS, a Game Turbo Mode to boost the gaming experience, and the latest security patch as well. The update is rolling out via OTA in a phased manner, so it may not be available for download immediately.

General Manager of Poco India, C Manmohan has tweeted that the rollout is underway. He confirms that Poco F1 is getting the anticipated Widevine L1 support with this MIUI 10 3.4.0 Stable ROM update. Widevine L1 brings HD streaming support for Amazon Prime Video and Hotstar. However, Poco F1 is yet to get Netflix HD streaming support. Xiaomi has confirmed that HD support for Netflix should arrive soon. This update also upgrades the security patch to March 2019, and a new Game Turbo mode for boosting the gaming experience.

The changelog shared by Manmohan says that this update also brings a new NFC shortcut in the notification shade, a new ability to restrict access to notification shade while the phone is locked, and the ability to stay on the lock screen even after using Face Unlock. The company had said that it would add 4K video recording at 60fps support in February this year, but that didn't happen. However, this new update brings the anticipated support for 4K 60fps. Earlier, Poco F1 only allowed 30fps frame rate as the maximum for recording 4K videos. There's also a new UI tweak that will show a floating window for incoming calls during gameplay.

The incorrect notification badge issue for the WhatsApp icon has been fixed, and errors on the Clock app and Camera apps were also fixed. The update fixes an issue that force closed the Camera app when it was closed and opened again in video mode. The update also brings a redesigned Mi Cloud page, and optimised Sync Settings as well. Manmohan added that the update also brings a system stability patch.

As mentioned, the update is a phased rollout, so it may be a few days before it reaches all users. Keep checking in Settings menu to see if you've received the new update, and update manually. Let us know any other changes that you notice after updating your Poco F1 in the comments below.

Xiaomi Poco F1 looks great value for the price, but is there a catch? We discussed this on Orbital, our weekly technology podcast, which you can subscribe to via Apple Podcasts or RSS, download the episode, or just hit the play button below.