Realme 10 Pro+ Live Images Leaked Ahead of Launch Next Month

Realme 10 Pro+ is expected to be powered by a MediaTek Dimensity 1080 SoC. 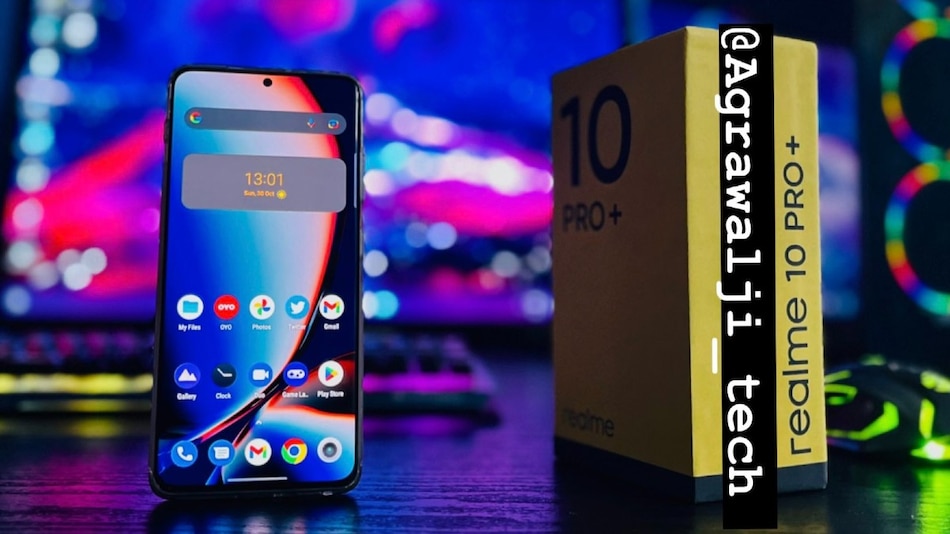 Realme 10 series is set to debut in November, however, the exact launch date is yet to be confirmed. Recent rumours have hinted that the Realme 10 4G, Realme 10 5G, and Realme 10 Pro+ could be a part of this upcoming smartphone lineup. Furthermore, a tipster has leaked supposed live images of the Realme 10 Pro+. The phone seems to sport a curved display with a centrally-aligned hole-punch slot. The leaked images also include the box packaging of the handset, which might suggest that it is a retail version of the Realme 10 Pro+.

According to images tweeted by tipster Gaurav Agrawal (Twitter: @Agrawalji_Tech), the Realme 10 Pro+ may sport a curved display with a central hole-punch slot. It appears to feature the volume rockers and power button on the right edge.

The Realme 10 Pro+ looks likely to feature a triple rear camera setup with LED flash. The leaked handset is shown in grey colour. These images also seem to include its box packaging, which might suggest that this is a retail model of the upcoming Realme smartphone.

Realme announced last week that the Realme 10 series will debut in November. However, it is yet to reveal the exact launch date and time. Tipster Paras Guglani (Twitter: @passionategeekz) has hinted that this lineup may arrive on Saturday.

As per a recent report, the Realme 10 Pro+ is said to have a 6.7-inch full-HD+ curved AMOLED display. It is expected to be powered by a MediaTek Dimensity 1080 SoC. This smartphone could get a triple rear camera setup, including a 108-megapixel main sensor, an 8-megapixel lens, and a 2-megapixel secondary sensor. It is likely to also feature a 16-megapixel front-facing camera. The handset could pack a 4,890mAh battery with support for 67W fast charging. The Realme 10 Pro+ could be 8.1mm thin and weigh about 172.5g.