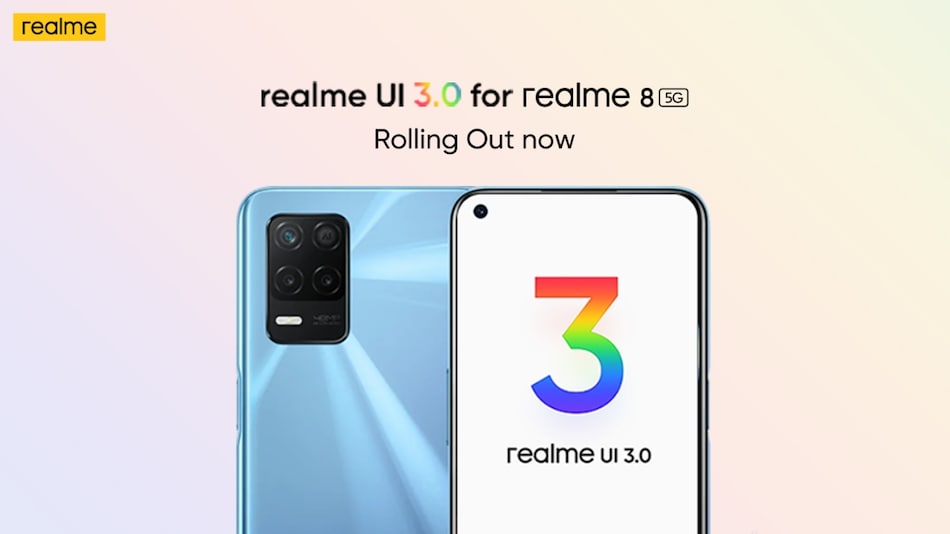 Realme announced on Friday that it is rolling out Realme UI 3.0 based on Android 12 for the Realme 8 5G and Realme Narzo 30 5G. The official rollout of the stable build for both handsets will be carried out in batches. The complete rollout will be completed in the coming days if no critical bugs are found. This new update brings a new design, including Smart Assistant widgets and a revamped page layout. The icons have also been redesigned to give them more depth and improved texture. The Realme UI 3.0 update will also reduce the CPU load average and lower the battery usage while gaming.

Realme has started rolling out the stable build of the Android 12-based Realme UI 3.0 for the Realme 8 5G and Realme Narzo 30 5G in India. Users must ensure that their smartphones are updated to RMX3241_11.A.16 and RMX3242_11.A.16 versions, respectively, before installing the new Realme UI 3.0 update, according to the company.

An exciting announcement for all #realme8 5G and #realmenarzo30 5G users!

The Realme 8 5G will receive the latest build version RMX3241_11.C.03 and the Realme Narzo 30 5G will get the build version RMX3242_11.C.03. Realme UI 3.0 brings several improvements and alterations. The home page layout has been revamped to reduce visual noise and to make icons stand out. In addition, the icons have also been redesigned and given more depth than before.

Realme UI 3.0 includes the company's Quantum Animation Engine 3.0, which is designed to "make animations more lifelike and optimizes more than 300 animations to bring more natural user experience." Furthermore, the FlexDrop multitasking feature has been optimised and renamed to Flexible Windows.

This update adds rule-based blocking of spam MMS messages. Realme UI 3.0 brings a Quick launch feature that showcases your most frequently used apps and pre-loads them for quick access. Games are now said to run more smoothly with a stable frame rate than before. The average CPU load has also been reduced which is said to lower battery usage.

The auto-brightness algorithm has been tweaked to adapt the screen brightness to different scenes. Realme has also added several accessibility features and now gives users the option to select the camera mode that gets displayed on the menu bar, according to the company.