The Redmi Note 10 Pro offers lots of features, but is the Narzo 30 5G more future-proof? 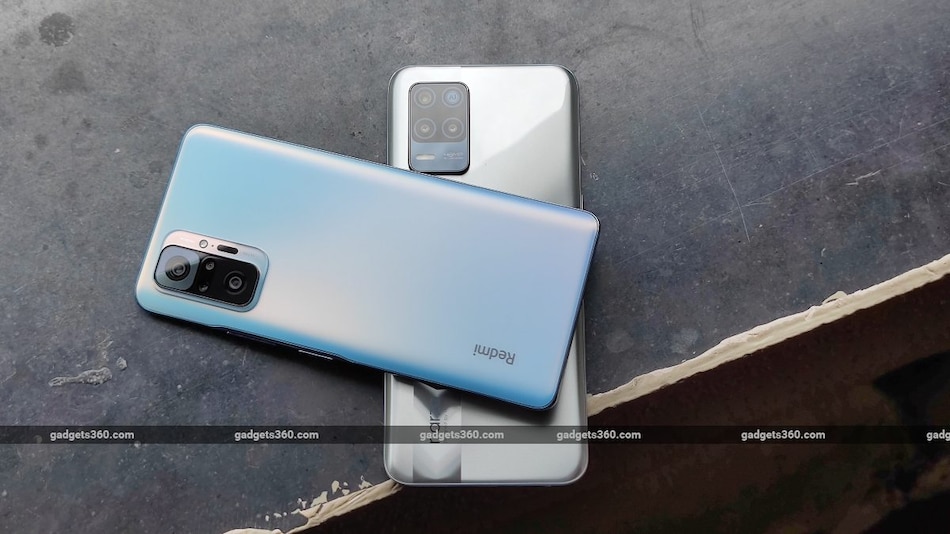 With operators yet to deploy 5G networks in India, it's going to be a while before those 5G bands on your budget 5G smartphone will be of use. It might not be a bad idea to future-proof your purchase by going in for a 5G device now, but in the budget segment, manufacturers have to cut down on other hardware (cameras, speakers, quality etc.) to deliver 5G at competitive prices. If you take a long hard look at the budget 5G smartphones available today, you'll see that you get a tonne of extra features on similarly priced 4G devices. So, we decided to stack two of the best phones priced at Rs 15,999 against each other; a comparison that will determine whether a budget 5G smartphone is value for money today.

The Realme Narzo 30 5G's frame and back panel are made of plastic. The glass protecting the display is Asahi Dragontrail glass. Both the front and rear panels are smudge magnets, and also attract a lot of dust. The device is quite slim at 8.5mm and is also relatively light at 185g. The frame's angled edges offer a good grip. The fingerprint reader is embedded in the power button, which sits on the right side, while the 3.5mm headphone jack is on the bottom.

The Xiaomi Redmi Note 10 Pro's body is a mix of plastic and glass, and also has an IP53 rating against water and dust. The display and the matte-finished back panel are made of Gorilla Glass 5, with the sandwiched frame being made of plastic. Both glass panels are good at resisting fingerprints. Obviously, the added weight makes the phone heavier than the Narzo 30 at 192g, but it's not that much of a difference, and the phone's body is quite slim at 8.1mm.

While a thickness of 8.1mm may sound interesting to most, this does not include the camera module, which protrudes quite a bit and adds a couple of millimetres at the back. This also makes the phone wobble when placed on a flat surface. The fingerprint reader, just like the Narzo 30 5G, is embedded in the power button, but is a bit hard to find given that it's placed almost flush with the frame.

Here's where things start to get interesting. The Narzo 30 5G has a 90Hz refresh rate full-HD+ LCD panel, while the Redmi Note 10 Pro has a 120Hz refresh rate full-HD+ Super AMOLED display. There's a MediaTek Dimensity 700 processor with an integrated 5G modem inside the Realme Narzo 30 5G. Xiaomi's Redmi Note 10 Pro goes with the tried and tested Qualcomm Snapdragon 732G processor, which may be a bit old but is no slouch.

The Narzo 30 5G is available in a single configuration: 6GB of RAM and 128GB of storage, while the Note 10 Pro is available in three variants so buyers can choose between 6GB and 8GB of RAM, and 64GB and 128GB of storage. Both smartphones have triple-card SIM trays which let you insert two Nano-SIMs as well as a microSD card. However, the Narzo 30 5G supports microSD cards up to 1TB, while the Redmi Note 10 Pro tops out at 512GB.

While the Narzo 30 5G offers dual 5G standby with support for several 5G bands, Xiaomi's Redmi Note 10 Pro is limited to 4G networks. Surprisingly, the other connectivity options aren't too different, with both smartphones supporting dual-band Wi-Fi (2.4GHz and 5GHz), along with Bluetooth 5.1. Those looking for an FM radio will have to go for the Xiaomi Redmi Note 10 Pro, as it's the only one that offers this.

The Realme Narzo 30 5G's (left) back panel is made of plastic, while the Redmi Note 10 Pro's (right) is made of glass

The software experiences on both smartphones are very different. Realme UI 2.0 which is based on Android 11, offers a lot of UI customisations with the ability to change the shape of the home screen and notification drawer icons, customise system theme colours, and even adjust the weight of the adaptive font it uses. While the UI appears quite stock, there are plenty of Realme-branded apps and several third-party ones including Soloop, Finshell Pay, Snapchat, Facebook, and more. None of these apps came in the way of the user experience, but the HeyFun and Theme Store apps do push promotional notifications.

Xiaomi's Redmi Note 10 Pro runs MIUI 12.5.2, which is also based on Android 11, but is nowhere close to the stock Android experience. While the UI is heavily customised by Xiaomi and comes loaded with Xiaomi-branded apps, everything seems well optimised, and there's no stutter or lag on this phone. Preinstalled third-party apps such as Netflix, Prime Video, Amazon, Facebook and LinkedIn are present but can be uninstalled. While both smartphones offer high refresh-rate displays that make the software experience appear fluid, Xiaomi's use of a better haptic vibration motor does enhance the MIUI 12 software experience. While the UI ran smoothly with no hiccups, I did get prompts from apps like the Wallpaper Carousel, GetApps to try out new wallpapers and update my apps. However, these can be switched off in Notifications settings.

With powerful processors and enough RAM, I did not notice any lag or stuttering on either phone with everyday use. However, the Redmi Note 10 Pro appeared to run more fluidly overall, which could be down to the use of a 120Hz refresh rate display rather than the 90Hz screen on the Narzo 30 5G.

Xiaomi's implementation with a much smaller cutout for the camera (left) was less intrusive while watching movies and playing games than Realme's (right).

The Redmi Note 10 Pro has a Super AMOLED display, which showcases better contrast with deeper blacks and was my obvious choice between the two smartphones when it came to streaming movies or shows. The Super AMOLED display also supports the Always On Display (AOD) feature, which is quite useful. The dual speaker setup on the Note 10 Pro also made games and movies sound more immersive when compared to the single speaker on the Narzo 30 5G. Both smartphones feature hole-punch cutouts for their front cameras, but Xiaomi's implementation with a much smaller cutout was less intrusive while watching movies and playing games.

While the Dimensity 700 processor turned out to be a winner in the CPU-centric benchmarks, this wasn't the case when it came to gaming. Both smartphones ran popular titles such as Asphalt 9: Legends, and Call of Duty: Mobile smoothly at their default settings and heat management was good too. However, I was stuck playing Call of Duty: Mobile at Medium graphics and High frame rate on the Narzo 30 5G, even though I could play at Very High settings (with Antialiasing switched off) on the Redmi Note 10 Pro.

Realme's Narzo 30 5G has fewer accessible cameras, when compared to not just the Redmi Note 10 Pro, but even the Narzo 20. There's a 48-megapixel primary camera, a 2-megapixel macro camera, and a 2-megapixel monochrome camera which is only activated in Portrait mode to calculate depth. Selfie duties are taken care of by a 16-megapixel camera.

When it comes to the camera apps on each phone, I preferred Xiaomi's approach compared to Realme's. All important controls are accessible with a single tap and plenty of secondary controls (macro camera, grid selection and more) are neatly laid out under a sub-menu.

Daylight photos taken with the Redmi Note 10 Pro appear sharp and loaded with detail, but also a bit oversaturated. These were still a lot better than Narzo 30 5G's daylight photos, which tended to be overexposed in the brighter areas of the scene and also showcased average detail. Photos taken using the Redmi Note 10 Pro's ultra-wide-angle camera showcased less detail when compared to shots taken with the main camera, but also showed noticeable purple fringing in the brighter areas of the scene.

Under street lighting at night, shots taken using the Narzo 30 5G came out average with a passable level of detail. Strangely, switching on the Night mode did not seem to improve things. With the Redmi Note 10 Pro, photos came out sharp, although with excessive contrast in Auto mode. Switching to Night mode improved things drastically and resulted in photos that were sharp with good detail, even when seen magnified. Both smartphones seemed to have trouble focusing in very dimly lit scenes. Switching to Night mode didn't seem to help when there was very little ambient light, with photos lacking detail and looking quite flat.

As expected, the Redmi Note 10 Pro's 5-megapixel macro camera proved superior to the Narzo 30 5G's 2-megapixel one. Xiaomi's macro camera setup also incorporates 2X telephoto, letting me get crisp shots while standing farther from the subject. Colours and details were quite good, and the tone was very similar (if not identical) to that of the primary camera, which is very good. What's also downright impressive about this phone is its ability to shoot video. The colours looked a bit saturated and a bit sharpened, but the quality at 1080p 30fps was pretty good especially when you consider that this is a budget smartphone.

As mentioned in my review of the Narzo 30 5G, its biggest omission has to be the lack of video options. I felt this even more when the phone was stacked up against the Redmi Note 10 Pro. Xiaomi's offering shot better video at any given resolution but lacked stabilisation when shooting at settings beyond 1080p 30fps. Still, video recorded with the Narzo 30 5G was quite good at 1080p 60fps and 4K 30fps, provided you don't walk around. In low light, video captured at any resolution was surprisingly noise-free, but just like in daylight, was quite jerky when walking around.

It's easy to conclude that at Rs. 15,999, the Xiaomi Redmi Note 10 Pro offers a superior Super AMOLED display, better gaming performance, better camera and video recording quality, better sound with stereo speakers, and also an IP53 rating. In comparison, the Realme Narzo 30 5G supports 5G bands with dual 5G standby. It also has a more modern MediaTek Dimensity 700 processor, more storage at the same price, and slightly better battery life, all packaged in a slim form factor. The cameras are quite average and the charging speed is relatively slow at 18W.

Eventually, it all boils down to how long you plan on holding on to your smartphone.

If you switch smartphones year on year, or even every two years, Xiaomi's Redmi Note 10 Pro definitely offers better value. Whenever 5G networks begin to roll out, you can check if it's worth the hype and upgrade to something new if need be.

If you usually hold on to your smartphone for more than two years and want to jump onto 5G whenever it arrives, then the Realme's Narzo 30 5G (Review), is not just the obvious choice, but also currently your only option at this price. It's got an updated processor that should still run fine two years from now, and all you will have to do is change your SIM card.