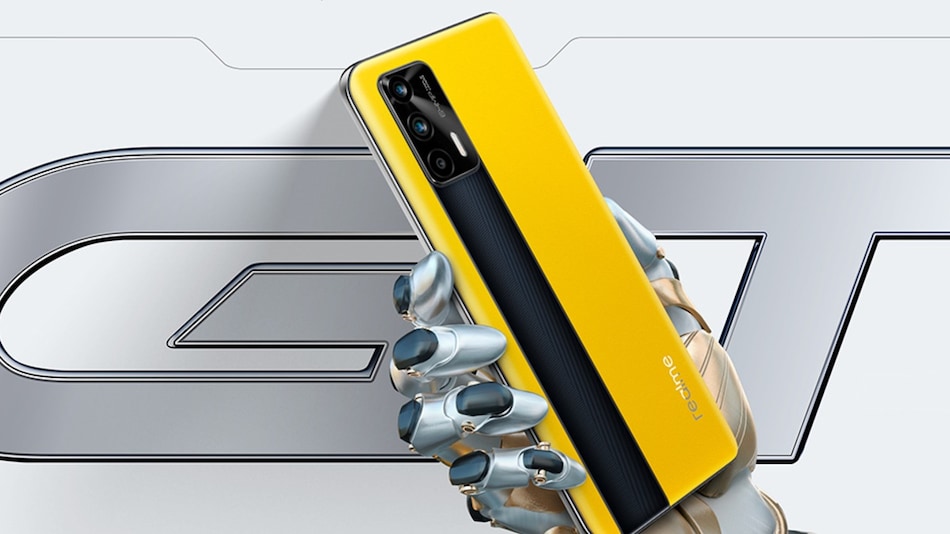 Realme GT 5G was launched globally in a virtual conference on Tuesday. The new Realme phone comes with a Qualcomm Snapdragon 888 SoC, 8GB or 12GB RAM variants, and a 120Hz AMOLED display. The Realme GT has up to 256GB of onboard storage and has features such as Dolby Atmos audio, 64-megapixel primary camera, and a stainless steel-made vapour cooling system. In addition to the Realme GT 5G, the Chinese company launched the Realme TechLife Robot Vacuum cleaner as its new Internet of Things (IoT) product, which will compete against the iRobot Roomba 971 and Xiaomi's Mi Robot Vacuum-Mop P. Realme also announced the global pricing of the Realme Watch 2 Pro and the Realme Watch 2. Additionally, the company teased its first tablet and laptop, which will be called Realme Pad and Realme Book, respectively.

Realme GT 5G price has been set at EUR 449 (roughly Rs. 39,900) for the 8GB RAM + 128GB storage variant. The phone also has a 12GB RAM + 256GB storage option priced at EUR 599 (Rs. 53,200). The Realme GT 5G will go on sale in selective countries, including Poland, Russia, Spain, and Thailand, followed by other markets. It will be available in Dashing Blue, Dashing Silver, and Racing Yellow (vegan leather) colours.

The Realme TechLife Robot Vacuum comes with a price tag of EUR 299 (roughly Rs. 26,600). It will go on pre-sale starting June 16 through AliExpress and Realme.com.

The dual-SIM (Nano) Realme GT 5G runs on Android 11 with Realme UI 2.0 and features a 6.43-inch full-HD+ AMOLED display with a 120Hz refresh rate, 360Hz touch sampling rate, and a 91.7 percent screen-to-body ratio. Under the hood, there is the octa-core Qualcomm Snapdragon 888 SoC, along with up to 12GB of LPDDR5 RAM. The smartphone has a triple rear camera setup that houses a 64-megapixel Sony IMX682 primary sensor, 8-megapixel secondary sensor with a wide-angle lens, and a 2-megapixel macro shooter.

For selfies and video chats, the Realme GT has a 16-megapixel selfie camera sensor at the front, with an f/2.5 lens.

The Realme GT 5G has up to 256GB of UFS 3.1 storage. Connectivity options include 5G, 4G LTE, Wi-Fi 6, Bluetooth, GPS/ A-GPS, USB Type-C, and a 3.5mm headphone jack. There is an in-display fingerprint sensor. The phone packs a 4,500mAh battery that supports 65W SuperDart charging. The proprietary charging technology is claimed to charge the built-in battery from zero to 100 percent in 35 minutes. Besides, the Realme GT 5G has 8.4mm thickness and 186 grams of weight.

The Realme TechLife Robot Vacuum is designed to offer a 2-in-1 vacuum and mopping solution using a LiDAR-based navigation system. The company claims that the new offering provides a precise cleaning experience to households. The robot vacuum cleaner comes with a tempered Gorilla Glass-equipped top cover and has 10 centimetres of height. It also includes 38 different sensors that include a time-of-flight (ToF) wall sensor, water tank detection sensor, cliff sensor, and an infrared recharge sensor.

Realme claims that the preloaded LiDAR system on the TechLife Robot Vacuum has up to 12 percent better accuracy over the ones available on the competitors. It is also touted to have 98 percent accurate mapping. Just like the Mi Robot Vacuum-Mop P and other similar vacuum cleaners, the Realme device works with the Realme Link app that allows users to create custom partitions, set cleaning modes, and schedule cleaning — wirelessly from their phones. You can also use Amazon Alexa or Google Assistant.

The Realme TechLife Robot Vacuum has a suction power of 3,000 Pascals. It also has a 5,200mAh battery that is claimed to provide continuous cleaning for three times in a 100-square meter room. Additionally, the vacuum cleaner operates at as low noise level as 55 decibels.