Samsung has not announced anything about the price or the availability of the Galaxy A31. 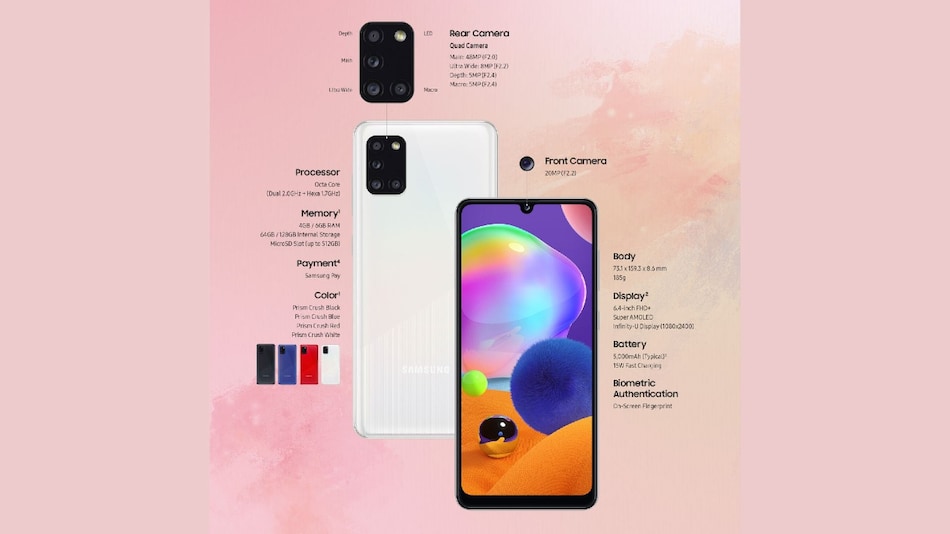 Samsung has officially announced its new Galaxy A31 mid-range smartphone. The new phone comes with a 6.4-inch full-HD+ AMOLED display with a waterdrop-style notch. The phone has been introduced in four colour options - Blue, Black, Red, and White. The Samsung Galaxy A31 features a quad camera setup on the back and comes with 5,000mAh battery. Samsung has not shared any details about the pricing or the availability of the Samsung Galaxy A31 right now.

The Samsung Galaxy A31 comes packed with 5,000mAh battery. The battery comes along with 15W fast charging support via USB Type-C.

On the camera front, the Samsung Galaxy A31 includes a quad camera setup on the back, which consists of a 48-megapixel main camera, an 8-megapixel ultra-wide-angle shooter, a 5-megapixel macro camera, and a 5-megapixel depth sensor. The front camera within the waterdrop-style notch is a 20-megapixel shooter.

Other features of the Samsung Galaxy A31 include Samsung Pay and an in-display fingerprint sensor.