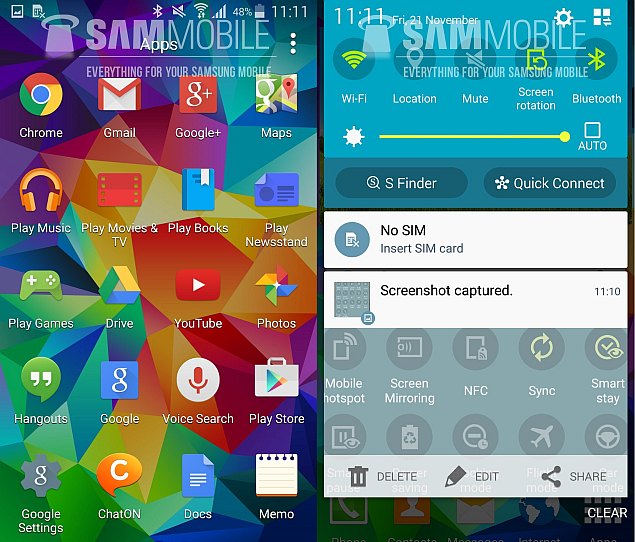 After a range of Nexus devices, Google's Android 5.0 Lollipop is reportedly being seeded to Samsung Galaxy S5 handset in European region, starting with Poland.

The Samsung Galaxy S5 model that is reported to have started receiving the Android version upgrade is SM-G900F (Indian octa-core model is SM-G900H), which is a commonly available unlocked variant. The new version number of Android 5.0 Lollipop for Samsung Galaxy S5 is G900FXXU1BNL2 with a Android LRX21P build.

Based on the number of video previews of the OS on Galaxy S5 and the screenshots posted by Sammobile, the handset is seen with better touch response (because of Android Run Time). However, no major ground-breaking difference is seen in the user interface as the handset runs its own TouchWiz UI over the new OS.

The users might also see new Android 5.0 Lollipop-styled toggle buttons, calendar, dialler app, new interactive notification tray and more. A number of apps in the Galaxy S5 will be featuring the new Material Design introduced in the OS. However, there might be some minor changes in the final build as the ones shown by Sammobile were running previous build versions.

Users of other Samsung Galaxy S5 models would still have to wait for the OS as it may take some time for the Korean smartphone maker to roll out Android 5.0 Lollipop to all the users worldwide.

Interestingly, Samsung rolled out Android 5.0 Lollipop to its Galaxy S5 before its phablet flagship, the Galaxy Note 4. The firm in October teased the upgrade by tweeting an image of Galaxy Note 4 accompanied by a number of lollipops stating, "Anyway you look at it, the #GALAXYNote4 Quad HD Super AMOLED display is pretty sweet. #NoteTheDifference."

As for the previous Galaxy S4 smartphone, Samsung has not yet confirmed any specific dates for the Android 5.0 Lollipop roll out for the handset. Users can nonetheless see the preview video of the handset running the latest OS.

Recently, HTC and Sony had also confirmed which of their devices will receive the Android 5.0 Lollipop update. While four of HTC's smartphones will be receiving an update to Android 5.0 Lollipop officially, Sony announced that the entire Xperia Z lineup will be updated to the new OS version.