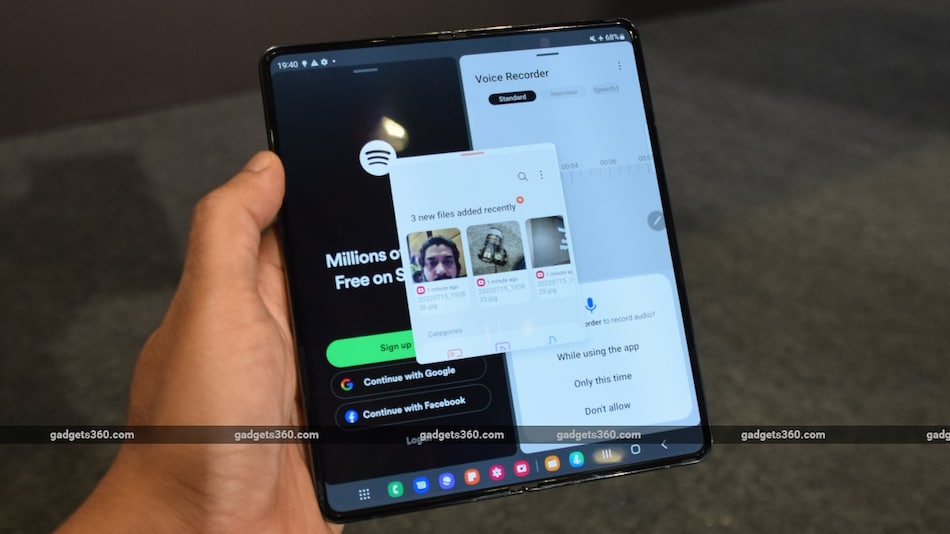 Samsung Galaxy Z Fold 4 was launched globally, including in India, on Wednesday at the much-awaited Galaxy Unpacked event. The smartphone is the fourth iteration of the South Korean company's foldable smartphone lineup, the Galaxy Z series. As per Samsung, the Galaxy Z Fold 4 offers a great camera experience, is company's more powerful smartphone yet, and sports a lighter as well as slimer dimensions than older generations of handsets. It comes with an under-display camera, a 7.6-inch Dynamic AMOLED 2X Infinity Flex Display, and a Snapdragon 8+ Gen 1 SoC under the hood. The handset makes its debut alongside the Galaxy Z Flip 4 — another foldable smartphone with clamshell design.

As far as the availability is concerned, the Samsung Galaxy Z Fold 4 will be available in Beige, Graygreen, and Phantom Black colours. There is a Samsung.com exclusive Burgundy colour option as well.

The dual-SIM (nano) Samsung Galaxy Z Fold 4 is the first smartphone that runs on One UI 4.1.1 based on Android 12L, a special version of Android created by Google for large-screen experiences, including foldables. The smartphone has a 7.6-inch Dynamic AMOLED 2X Infinity Flex Display as its main screen. It has QXGA+ (2,176x1,812 pixels) resolution and 21.6:18 aspect ratio. It is an LTPO display and the refresh rate can start from as low as 1Hz to up to 120Hz. When it comes to the cover display, the smartphone features a 6.2-inch HD+ (904x2,316 pixels) Dynamic AMOLED 2X Display with up to 120Hz adaptive refresh rate and 23.1:9 aspect ratio.

Samsung says that the phone gets an armour aluminium frame and hinge cover for structural durability. The cover screen and the back panel gets Corning Gorilla Glass Victus+ protection. The main screen panel gets an optimised layer structure for durability. Under the hood, the Samsung Galaxy Z Fold 4 gets a Qualcomm Snapdragon 8+ Gen 1 SoC which is paired with 12GB of RAM as standard.

For photos and videos, the Samsung Galaxy Z Fold 4 gets a total of five cameras: one on the cover display, one under display camera on the main screen, and three on the rear panel. The triple rear camera is headlined by a 50-megapixel main sensor paired with f/1.8 aperture lens. It offers dual-pixel autofocus, optical image stabilisation (OIS), and has a field-of-view of 85 degrees. There is a 12-megapixel secondary sensor paired with an f/2.2 aperture ultra-wide lens that has a field-of-view of 123 degrees. The third 10-megapixel sensor is coupled with an f/2.4 telephoto lens. It offers OIS, Phase Detection Autofocus (PDAF), and 30X Space Zoom (assisted by AI Super Resolution technology).

The Samsung Galaxy Z Fold 4 comes with up to 1TB internal storage. Connectivity options include 5G, 4G LTE, Wi-Fi 6E, Bluetooth v5.2, and a USB Type-C port. Sensors onboard include a side-mounted fingerprint sensor, accelerometer, barometer, gyro sensor, geomagnetic sensor, proximity sensor, and light sensor. The smartphone gets a 4,400mAh dual battery and Samsung claims that with its 25W charger (sold separately), the phone can juice up to 50 percent in around 30 minutes. It also comes with PowerShare wireless charging support.

Other features of the Samsung Galaxy Z Fold 4 include a new Taskbar for multitasking in the latest One UI software, support for quick copy and paste of links, photos and more from one app to another (Google apps), optimised experience for popular social media apps like Facebook, Flex mode, Samsung Knox security, S Pen support, and IPX8 rating for dust and water resistance. It measures 130.1x155.1x6.3mm when unfolded and weighs 263g.