Tecno Pop 6 Pro is launched with 3GB of RAM and 32GB of storage. 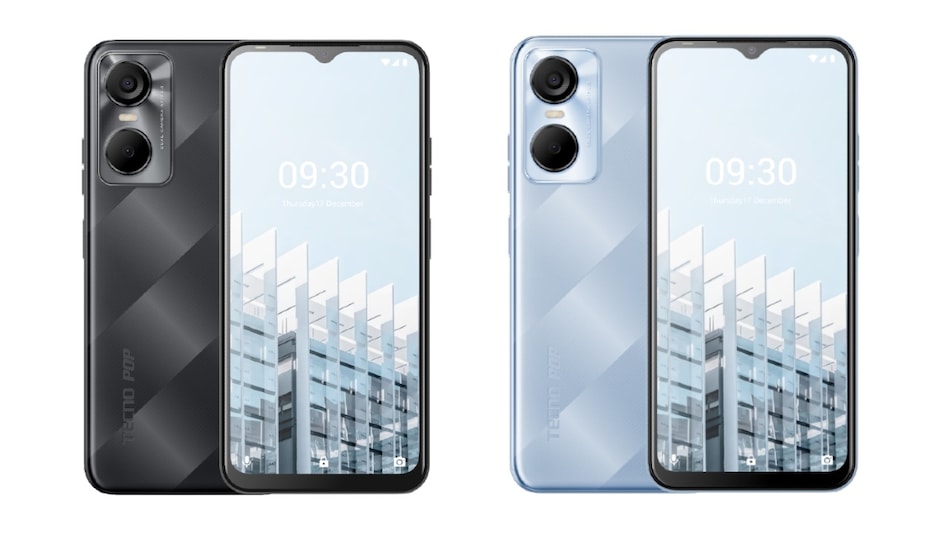 Tecno Pop 6 Pro was unveiled over the weekend to join the company's smartphone lineup in Bangladesh. It sports a 6.6-inch HD+ Dot Notch display, a dual-rear camera setup with 8-megapixel main camera, an unidentified quad-core SoC under the hood, and a 5,000mAh battery. The smartphone is the successor of the Tecno Pop 5 Pro handset that was launched in India in January this year. Tecno recently teased the launch of the Techno Pop 6 Pro in India via Amazon.

Tecno Pop 6 Pro price is set at BDT 10,490 (roughly Rs. 8,900). The smartphone is listed in two colour options — Peaceful Blue and Polar Black — on Tecno's Bangladesh website. The phone will soon be launched in India via Amazon. Tecno previously revealed that the Indian variant of the smartphone will come with a 6.56-inch display and a designer back panel.

The Tecno Pop 6 Pro runs on Android 12 (Go Edition) and sports a 6.6-inch HD+ (720x1,612 pixels) display with a Dot Notch cutout to house the front camera. It gets a designer back panel. It is powered by an unidentified octa-core SoC which is paired with 3GB of RAM.

For photos and videos, the Tecno Pop 6 Pro comes with a dual rear camera setup that is headlined by an 8-megapixel main sensor. It is accompanied by an AI-powered unnamed second sensor and a dual flash. On the front is a 5-megapixel camera with flash for selfies and video calls.

The Tecno Pop 6 Pro gets 32GB of inbuilt storage. Connectivity options on the smartphone include 4G, GPS, Wi-Fi, Bluetooth, FM, and OTG support. Sensors onboard are a gyro-sensor, ambient light, distance, and a side-mounted fingerprint sensor. The smartphone packs a 5,000mAh battery and it measures 164.85x76.25x8.75mm.

Oppo Leads Made in India Smartphone Shipments in Q2 2022: Counterpoint
Bitcoin Slips Down by Over 6 Percent, Majority of Altcoins Descend Down Price Ladder