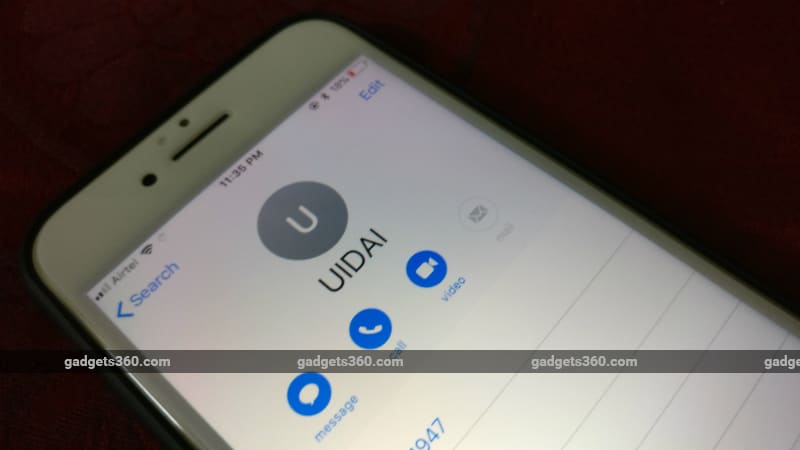 The UIDAI helpline number was 'inadvertently coded' into Android

Google finally put the controversy of UIDAI helpline number showing up seemingly randomly in people's phone books at rest on Friday and confirmed that the issue didn't result from any directive by any authority in India but due to a software issue in Android. The controversy under which UIDAI's now-decommissioned toll-free number was spotted by many mobile phone users in the country can be traced back to 2014, Google said, when the then UIDAI helpline number and the 112 distress helpline number were "inadvertently coded" within the Android setup wizard and has remained on devices, the company confirmed to Gadgets 360 via an emailed statement late on Friday.

"Our internal review has revealed that in 2014, the then UIDAI helpline number and the 112 distress helpline number were inadvertently coded into the SetUp wizard of the Android release given to OEMs for use in India and has remained there since," a Google spokesperson said in a statement emailed to Gadgets 360. "Since the numbers get listed on a user's contact list, these get transferred accordingly to the contacts on any new device. We are sorry for any concern that this might have caused, and would like to assure everyone that this is not a situation of any unauthorised access of their Android devices. Users can manually delete the number from their devices."

The spokesperson also confirmed that the issue is set to be fixed in an upcoming release of the setup wizard that will be provided to OEMs over the next few weeks.

If you are wondering how iPhone users reported the number showing up in their contacts, it's likely down to the fact that they synced their contacts with a Gmail account that already had the said contact added to its list after being used on an impacted Android device.

The controversy arose after a large number of mobile phone users on social media reported the sudden placement of a contact featuring the old helpline number of Unique Identification Authority of India (UIDAI). UIDAI refuted media reports in a series of tweets earlier on Friday and highlighted that the helpline number spotted by the users, which was 18003001947, was no longer a valid toll-free number, and it was changed to 1947 two years ago. "UIDAI has reiterated that it has not asked or advised anyone including any telecom service providers or mobile manufacturers or Android to include 18003001947 or 1947 in the default list of public service numbers," the authority behind Aadhaar had said.

It was initially speculated that the helpline number was pushed from the telcos. However, the Cellular Operators Association of India (COAI) denied any role in the matter by its associated telcos while responding to an emailed query. "The inclusion of a certain unknown number in the phonebooks of various mobile handsets is not from any telecom service provider," COAI had said.

UIDAI Number Is Showing Up Even on New Phones Out of the Box
With Apple's $1 Trillion Valuation, Wall Street Eyes Bigger Gains