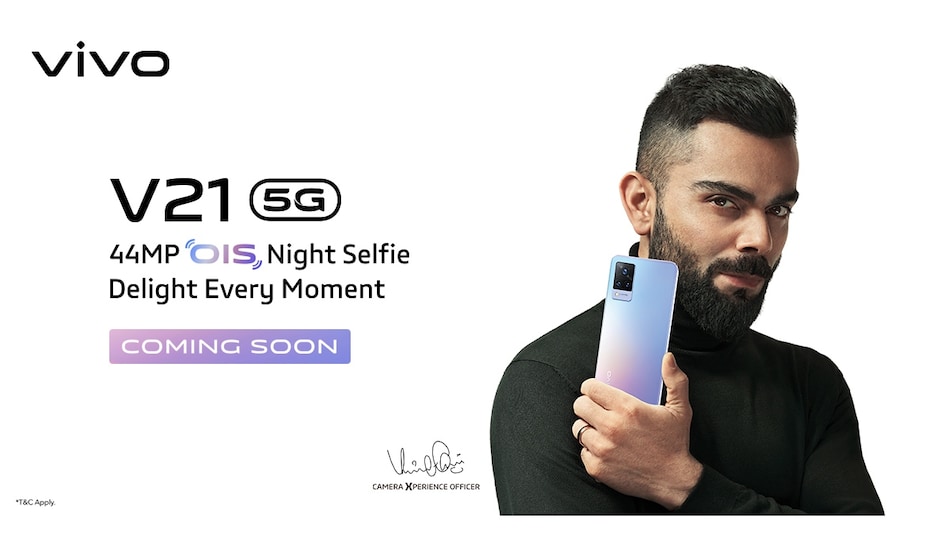 Vivo V21 5G will be launched in India soon, and it will come equipped with a 44-megapixel selfie camera, the company has announced via Twitter. The news comes a few days after Vivo announced that it is launching the Vivo V21 series in Malaysia on April 27, and it was reported that the phone could make its India debut on the same day. The Vivo V21 series is expected to include Vivo V21 (in both 4G and 5G variants) and the Vivo V21e. The Vivo V21 SE could also join the lineup.

As per a tweet by Vivo India, the smartphone will offer optical image stabilisation (OIS) for the 44-megapixel front camera, and users will be able to capture “Night Selfie” with it. The image shared in the tweet also shows the back panel of the phone. It seems that the Vivo V21 5G will sport a triple rear camera setup, and will have the same design as the previous generation.

As far as the Vivo V21 5G specifications are concerned, tipster Sudhanshu claimed in a tweet that the Vivo V21 5G will run Android 11, and powered by the MediaTek Dimensity 800U. The Vivo smartphone is claimed to sport a 64-megapixel primary sensor with a lens that has OIS. The triple rear camera is also said to come with an 8-megapixel ultra-wide-angle lens and a 2-megapixel macro camera camera. Reportedly, the smartphone will not have a 3.5mm audio jack, and will come with a hybrid SIM slot.

Additionally, a report claimed that a Vivo phone with model number V2061 was listed on Google Play Console. This smartphone is believed to be the Vivo V21 SE. The handset was seen with 8GB of RAM, Qualcomm Snapdragon 720G SoC, full-HD+ (1,080x2,400 pixels) display, and Android 11.

Which is the bestselling Vivo smartphone in India? Why has Vivo not been making premium phones? We interviewed Vivo's director of brand strategy Nipun Marya to find out, and to talk about the company's strategy in India going forward. We discussed this on Orbital, the Gadgets 360 podcast. Orbital is available on Apple Podcasts, Google Podcasts, Spotify, and wherever you get your podcasts.