Funtouch OS 13 Update Based on Android 13 Announced; Will Roll Out to Several Vivo, iQoo Phones

Vivo's announcement comes a day after the South Korean smartphone maker, Samsung, announced the One UI 5.0, which is its own iteration of Google's Android 13. 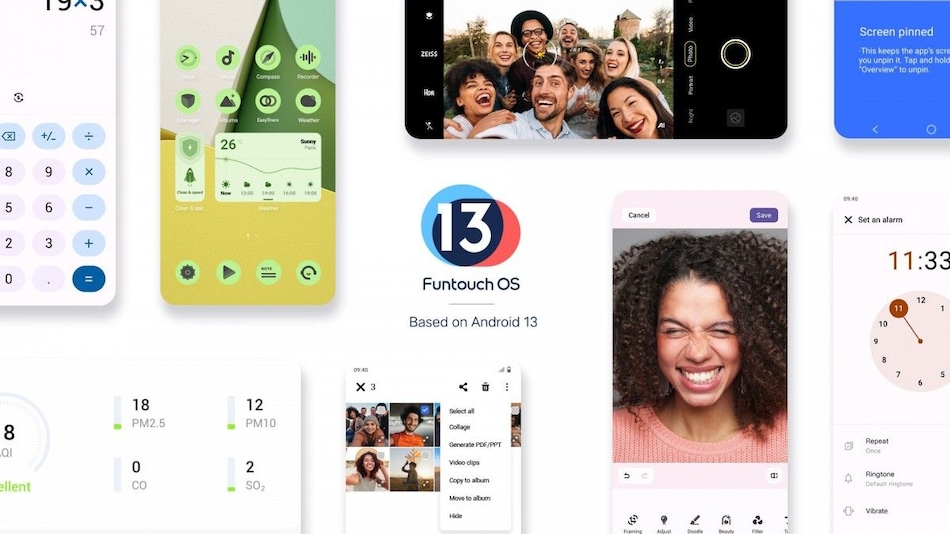 Funtouch OS 13, the update for eligible Vivo devices based on Android 13, has been announced by the company. The Chinese smartphone maker has revealed the rollout schedule for the eligible Vivo and iQoo models. The announcement comes a day after Samsung announced the One UI 5.0 rollout for the Samsung Galaxy S22 series. Funtouch OS 13 will be released as a successor to Funtouch OS 12 which was based on Android 12 and rolled out to eligible handsets last year.

The latest OS update for Vivo smartphones will come with a custom Android skin based on Android 13. The company has already rolled out the latest OS to beta testers on its flagship handsets. Most iQoo devices will be eligible to beta test the Funtouch OS 13 from November of this year onwards. The eligibility list includes over 50 devices from both Vivo and iQoo.

Our #FuntouchOS13 based on #Android13 upgrade roll-out plan is here!
Level up your experience in a more personalized and secure ways.
Enjoy a more stable and smooth #OS .#vivo #FuntouchOS #Android13 pic.twitter.com/G2GwjzkWO9

From the iQoo portfolio, the iQoo 9 series, iQoo 7 series, iQoo Z series, and the iQoo 6 Neo series, will receive the Funtouch OS 13 update, confirmed a tweet by iQoo. However, the iQoo 3 series will not be updated to Android 13-based Funtouch OS.

Our #FuntouchOS13 based on #Android13 upgrade roll-out plan is here! Level up your experience in a more personalized & secure way on your #iQOO smartphones, See the Upgrade Rollout Timeline for your #iQOO Smartphone here 🎉

Major improvements over the current version of Funtouch OS from Vivo include app pinning that will help users prevent other users from switching to different apps on their phone, improved control capabilities through iManager, and a new stabiliser ring in the viewfinder while capturing images.

Funtouch OS 13 will also provide additional ways to customize the home screen, through added capabilities in customising icons to match the wallpaper background and system UI theme. The lastest OS will also feature monochrome icons which display the settings menu can be in a single colour, making for a more minimalistic appearance.

Users will also be able to hide specific photos from their device's gallery app, a feature which can be accessed through the three-dot menu in the stock gallery application on Funtouch OS 13.

Funtouch OS 13 also introduces a new app manager in iManager which is Vivo's solution to have all the phone controls in one place. iManager will allow users to monitor app usage time while also allowing users to close applications with a single on-screen tap. The iManager will also intelligently adjust CPU frequency based on the phone's cooling capabilities.

Video editing on Funtouch OS 13 will allow users to mute audio in select segments of the video that is being edited.

Photo editing on Funtouch OS 13 can be activated on the viewfinder itself through a horizontal swipe which will allow users to select edit tools like vibrance, brightness, contrast, and exposure. Vertical swipes on each of the edit tools will allow for the value to go between +100 and -100, according to the company.

Seagate Warned by the US for Breaking Export Control Law in Deal With Huawei
Realme 10 Series Confirmed to Launch in November, Design Teased: Details