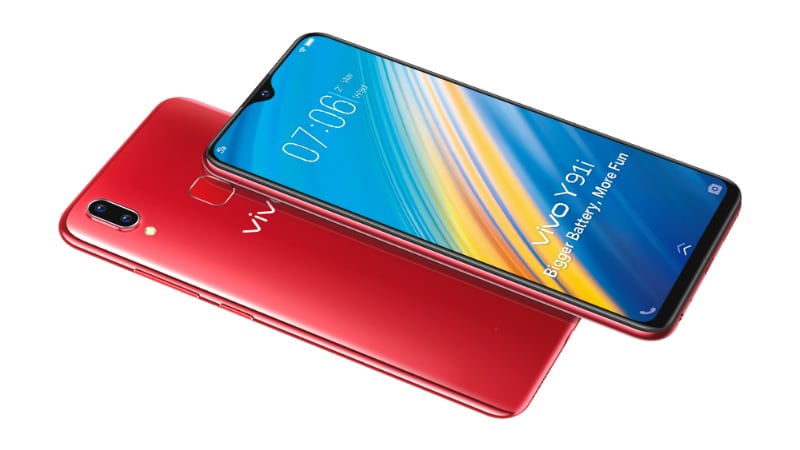 Vivo Y91i has been listed in Malaysia and Thailand

Vivo Y91i, a new phone model by the Chinese smartphone maker, is reportedly set to launch in India. It is said to arrive in the country with a starting price of Rs. 7,990. Product listings on the Malaysia and Thailand sites of Vivo have indicated the key specifications of Vivo Y91i. The hardware of the Vivo Y91i is similar to the Vivo Y91 that was launched in India earlier this year. The Y91 also received a Rs. 1,000 price cut recently, hinting at the possibility of an impending Y91i launch.

Mumbai-based retailer Mahesh Telecom on Thursday reported that the Vivo Y91i is coming to India with a price tag of Rs. 7,990 for the 2GB RAM/ 16GB storage option. The retailer also said that the 32GB storage model of the new phone would come at Rs. 8,490.

The retailer hasn't confirmed the availability of the Vivo Y91i in India. Similarly, the source didn't reveal the specifications of the new model.

We've reached to Vivo India for clarity on the Y91i launch in India and will update this space when we hear from them.

As per the specifications of the Vivo Y91i listed in Malaysia and Thailand, the dual-SIM (Nano) phone runs Funtouch OS 4.5 based on Android 8.1 Oreo and features a 6.22-inch HD+ (720x1520 pixels) IPS display along with a waterdrop-style notch. It is powered by an octa-core MediaTek Helio P22 SoC, coupled with 2GB of RAM.

The Vivo Y91i has a dual rear camera setup in Malaysia and Thailand that includes a 13-megapixel primary sensor and a 2-megapixel sensor along with f/2.2 and f/2.4 lenses, respectively. There is also an 8-megapixel selfie camera at the front along with an f/1.8 lens.

In terms of storage, the Vivo Y91i has 16GB and 32GB of inbuilt storage options that both are expandable via microSD card. Connectivity options include 4G LTE, Wi-Fi, Bluetooth v5.0, GPS/ A-GPS, Micro-USB, and a 3.5mm headphone jack. The phone has a fingerprint sensor at the back as well. Besides, it packs a 4,030mAh battery and measures 155.11x75.09x8.28mm.

As we mentioned, the specifications of the Vivo Y91i are similar to the Y91 that was launched in India earlier this year. The Y91 also recently received a price cut and is available at Rs. 9,990 for the lone 2GB RAM/ 32GB storage model.