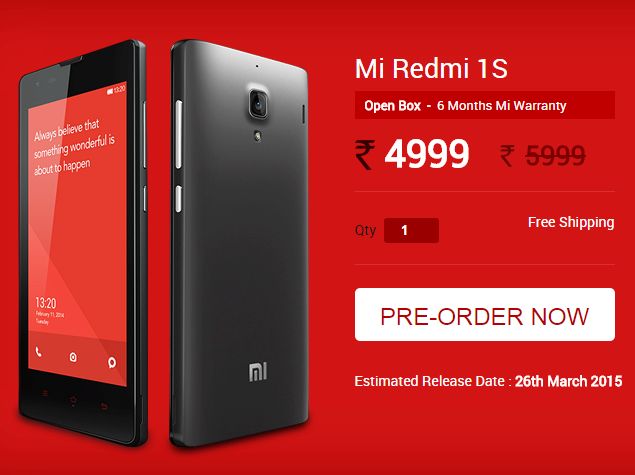 GreenDust, a marketplace that sells refurbished and pre-owned products, on Monday announced that it will sell the popular Xiaomi Redmi 1S in two categories - 'unboxed' at Rs. 4,999, and 'refurbished' at Rs. 4,599.

The Redmi 1S units available via GreenDust are either unboxed, which are seal-opened but unused units, or refurbished, which had "some software issues" or other problems that were fixed by Xiaomi. The retailer confirms that the refurbishments were conducted by official Xiaomi service partners and will also be covered by GreenDust's no-questions-asked 15-day return guarantee. Both "refurbished and unboxed" Redmi 1S units will have a six-month warranty from Xiaomi.

Commenting on the announcement, Hitendra Chaturvedi, Founder and CEO, GreenDust said, "If this pilot is successful, we will execute all our flash sales with such amazing products at amazing price only through our mobile app - a first in India."

It's worth mentioning that Flipkart is no longer selling the Redmi 1S in India and instead will be holding the first slash sale for the Xiaomi Redmi 2 starting Tuesday.

Xiaomi back in January was reported to be trying its hands on a different retail model involving sale of "refurbished and unboxed" phone units and it seems the company has indeed tied up with few retail partners. The Xiaomi Redmi 1S handsets being sold by GreenDust under the pilot can be expected to be the ones returned by buyers to Flipkart, the exclusive online retail partner of the brand in India.