Xiaomi Redmi 6A vs Redmi 5A vs Samsung Galaxy J2 (2018): Price, Specifications Compared 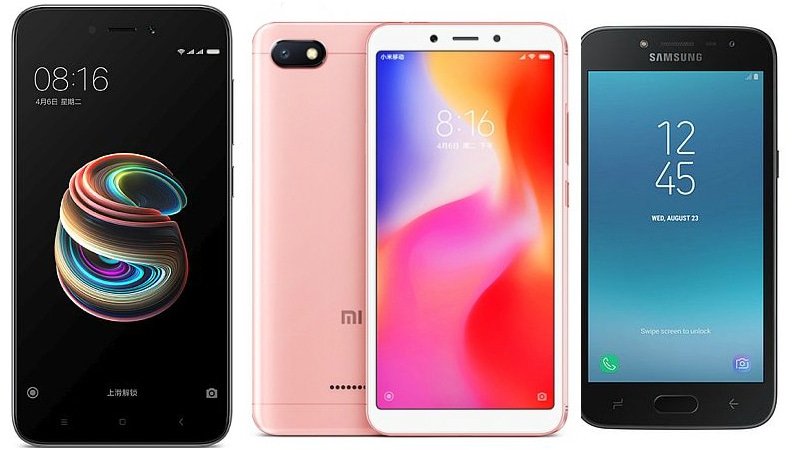 After the grand Xiaomi Mi 8 launch last month, the Chinese company decided to now launch the Redmi 6 and Redmi 6A smartphones at an event in Beijing. These budget smartphones will be made available in China through Xiaomi's offline and online stores starting 10am on June 15. The Redmi 6A, in particular, is the successor of the Redmi 5A, and it has gotten upgrades in few departments. The new Redmi 6A comes with features such as an 18:9 display, Face Unlock, and the latest Helio A22 chipset. We pit the Redmi 6A with last year's Redmi 5A to see how much of an improvement it brings, and we also pit it against the Samsung Galaxy J2 (2018) to understand how it fits among the current competition in the market.

While the Xiaomi Redmi 5A was launched in October, the Redmi 6A has just been launched a few hours ago. Even the Samsung Galaxy J2 (2018) was launched in India in April this year. The Redmi 6A is priced at CNY 599 (roughly Rs. 6,300) for the lone 2GB RAM/ 16GB inbuilt storage variant. It will be made available in China through Xiaomi's offline and online stores starting 10am on June 15. The predecessor Redmi 5A was also priced the same at launch, and its India price started at Rs. 5,999 for the 2GB RAM, 16GB storage variant, and went up to Rs. 6,999 for the 3GB RAM, 32GB storage variant. In comparison, the Samsung Galaxy J2 (2018) is priced in India at Rs. 8,190.

While the Redmi 6A runs MIUI 9 based on Android 8.1 Oreo, the other two are based on Android 7.1 Nougat. Perhaps the biggest difference is its 5.45-inch HD+ (720x1440 pixels) display with 18:9 aspect ratio. The other two have smaller 5-inch displays, with the Samsung variant sporting qHD (540x960 pixels) resolution. The predecessor featured a 5-inch HD (720x1280 pixels) display with a pixel density of 296ppi.

Xiaomi has used the latest MediaTek Helio A22 chip instead on the Redmi 6A - at least, on the China variant. The predecessor and the Samsung Galaxy J2 (2018) are both powered by the Snapdragon 425 processor. The Redmi 6A and Samsung Galaxy J2 (2018) sport a 2GB RAM/ 16GB storage bundle. While the Redmi 5A was launched with the same RAM/storage bundle in China, in India it also came with the 3GB RAM/ 32GB storage option. Perhaps, when the Redmi 6A will launch in India, more variants may also be introduced. All the three smartphones have the option to expand memory using the microSD card slot.

Talking about design, the Redmi 6A looks very similar to the Redmi 5A, but a few tweaks can be noticed. The Redmi 6A has onscreen buttons, visible antenna bands, a horizontal camera ring housing the flash and sensor, and the speaker placed at the back. The Redmi 5A sported capacitive buttons, and had visible antenna bands as well. The Samsung variant has capacitive buttons, a home button, lots of bezel, and a metal body. The rear camera sensor and flash are stacked vertically.