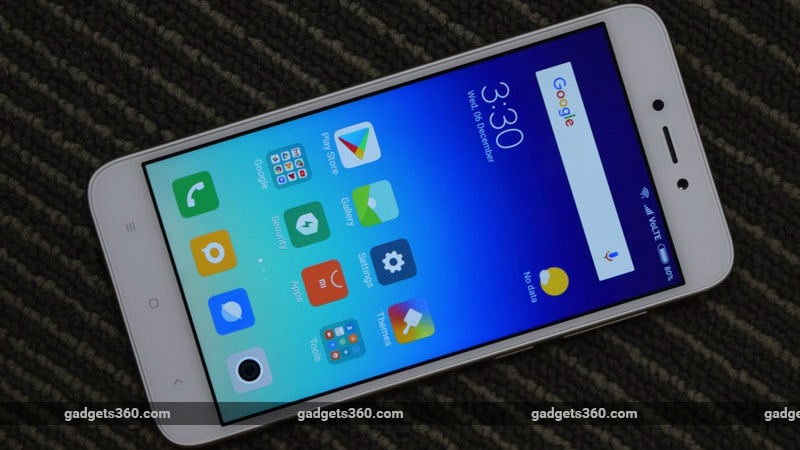 Xiaomi has been crowding the budget smartphone market with multiple models and variants at overlapping price points, all with impressive specifications that the competition has struggled to match. At the lowest end, the Redmi 4A (Review) has been a compelling phone ever since its launch in India eight months ago, and we have recommended it to anyone on a water-tight budget. Now, Xiaomi is replacing its entry-level Redmi 4A with the Redmi 5A and making a really big deal about this launch even though there's very little difference between the two models.

In a sea of patriotically named phones such as Micromax's Bharat line and the Karbonn A40 Indian (Review), Xiaomi is positioning the Redmi 5A as a desh ka smartphone. What exactly qualifies it for that title is unclear - it might be its low price, the fact that it's made in India, or its promise of exceptional battery life. Perhaps the most interesting thing about this launch is Xiaomi's limited-time Rs. 1,000 discount on the lower-end model, which brings the price down to a very tempting Rs. 4,999.

We're curious to see what exactly has changed, and what buyers stand to gain. Here's our full review.

There isn't much to say about the Redmi 5A's looks if you've used any entry-level Android smartphone over the past year or two. It's all plastic, though the rear has a slightly metallic finish. Xiaomi says it will be sold in Dark Grey, Gold, and Rose Gold, though only the first two are listed as options for the first sale. Our Gold unit had a white front face, and we feel that the Dark Grey option with a black front would be more to our tastes.

The Redmi 5A has a 5-inch screen and there's quite a lot of plastic above and below it. Still, it's well suited to one-handed use. Grip is pretty good despite the 8.35mm thickness, and weight is quite manageable at 137g. When compared to the Redmi 4A, the differences are purely cosmetic. The two models vary by less than 1mm in terms of height and width.

There are capacitive navigation buttons below the screen which aren't backlit, but that's only to be expected at this price level. In a familiar Xiaomi touch, there's a status indicator right below the Home button which is completely invisible until it lights up when you're charging the phone.

The power and volume buttons are on the right, and there are two trays on the left - one for a single Nano-SIM, and another for a microSD card as well as another SIM. The camera at the back has a single-LED flash next to it, and the phone's speaker grille runs along the entire lower back. There's a Micro-USB port on the bottom and a 3.5mm audio socket on the top. One interesting touch is the presence of an IR emitter on the top, which you can use to control household appliances.

You get a charger and a Micro-USB cable in the box, but as usual, no headset. Interestingly, the company seems to be moving towards using Redmi as more than just a name for one product line - the box screams "Redmi 5A" on the front, sides and back, while the Xiaomi name and logo are much smaller and are almost tucked away out of sight.

Xiaomi Redmi 5A specifications and software

It's a bit surprising that the Redmi 5A's specifications are pretty much identical to those of the Redmi 4A, which it replaces. You get the same Qualcomm Snapdragon 425 processor, with four cores clocked at 1.4GHz. The screen measures 5 inches diagonally and has a resolution of 720x1280. There's a 13-megapixel rear camera and a 5-megapixel front camera. Wi-Fi 802.11 b/g/n, Bluetooth 4.1, FM radio, and GPS are supported. You can choose between a base variant with 2GB of RAM and 16GB of storage, and a more expensive one with 3GB of RAM and 32GB of storage.

The changes, if you can even spot them, are extremely subtle. The Redmi 5A actually has a slightly smaller battery, at 3000mAh down from 3120mAh. It also has a dedicated microSD card slot rather than the Redmi 4A's hybrid dual-SIM arrangement. It uses Nano-SIMs rather than Micro-SIMS, and the maximum supported microSD capacity has gone up from 128GB to 256GB. That's pretty much it - one feature that's slightly worse, and one that's a bit better.

Unsurprisingly, with the exception of the IR emitter, the Redmi 5A has no extras compared to its predecessor. Rather than spotlighting one particular feature such as a fingerprint reader, a front flash, a huge battery, secondary rear camera or an 18:9 screen, Xiaomi has chosen to stick with pushing out a workhorse all-rounder at this price level.

At least things are a bit fresher on the software side. Xiaomi ships the Redmi 5A with Android 7.1.2, and version 9 of its custom MIUI skin running on top. This is single-layered UI with no way to enable an app drawer, which might not be a bad thing for first-time Android users. We noticed a few unnecessary animations on the home screen icons and when scrolling through long lists. There are a few themes you can choose from and hundreds more that you can download through the Themes app. You can also download individual wallpapers, fonts, and ringtones. These all appear to be free for now, but Xiaomi could start making money off downloads like this in the future.

If you dig through the Settings app, you'll find options for splitting the quick toggles out into a separate panel within the notifications shade; configuring a "Second Space" user profile for privacy; setting up gesture shortcuts; and assigning extra functions to the Android navigation keys. There's also Dual Apps functionality which lets you run a second instance of any app for use with a second account; and App Lock which lets you restrict app access - since there's no fingerprint reader, you have to use an unlock pattern to use this feature.

As far as entry-level phones go, Xiaomi has done well in balancing cost and performance. The Redmi 5A is capable of handling everyday tasks such as Web browsing, social apps, and messaging. We were even able to play a few heavy games, though performance wasn’t perfectly smooth. There was usually less than 500MB of free RAM out of our review unit's 2GB. We found the phone stuttering slightly when switching apps sometimes, but only really struggling when we ran heavy tests or games. Things also definitely took a turn for the worse with the Second Space feature enabled.

Benchmark scores were decent enough. We got 36,421 in AnTuTu; 683 and 1,887 in Geekbench 4's single-core and multi-core tests respectively; 3,719 in 3DMark Ice Storm Extreme; and 14fps in GFXBench. Our test phone was the variant with 2GB of RAM and 16GB of storage - it stands to reason that the more expensive variant's additional RAM will make performance smoother.

The screen is pretty sharp, and even fine text looks good. Viewing angles are great, and brightness is high enough for outdoor use. However, colours don't really pop and we found that videos and games looked a bit dull. Although the speaker grille runs across the back of the phone, there's only one spot that sound actually comes out of, and the Redmi 5A is muffled easily when lying face-up on a soft surface such as a bed. Sound is pretty weak and distorts badly at high volumes.

If you swipe to the right from the Redmi 5A's lock screen, you'll see a menu with shortcuts to the Mi Remote app and something called Mi Home. The remote app is basic and unfortunately the process of figuring out how to control your TVs and other appliances requires some trial and error. There are IR profiles for Indian TV, set-top box, and AC brands including private-label store brands. Unlike with some other low-end phones, third-party apps can use the IR emitter.

The Redmi 5A's cameras are quite mediocre, but once again we have to balance our expectations against this phone's low price. Photos don't have a lot of detail - objects often have fuzzy borders, and textures aren't reproduced very well. We found that colours were pretty dull, and not just when checking photos on the phone's own screen. We were able to take some decent close-ups but anything at a distance suffered. At night, there was a serious drop in quality, and it was hard to capture anything that didn't have artificial light falling directly on it. On the plus side, autofocus was usually quick to lock during the daytime. Video recording goes up to 1080p, but we found that clips looked quite artificial and weren't very smooth.

The front camera applies pretty aggressive beautification by default, making faces look extremely artificial. There's a Pro beauty mode and a Smart beauty mode, the difference being that Pro mode gives you individual "Slim" and "Skin" sliders while Smart tries to guess your age and gender. When disabled, it's clear that the front camera is pretty weak.

The camera app isn't very well laid out, for example it takes two taps to get to the options menu from the default mode, but in some modes you can't get to it at all.

Xiaomi has boasted about the Redmi 5A's battery life as part of its "desh ka smartphone" pitch, and we were pleased to note that we could in fact get through a full day of casual use with up to 20 percent left over. Our HD video loop test went on for 11 hours, 9 minutes which is quite impressive.

Verdict
Xiaomi continues to impress us with its low prices, and even though the Redmi 5A doesn't give us anything new or different compared to the Redmi 4A, it still delivers excellent value. If you can grab the 2GB/16GB version at the introductory offer price of Rs. 4,999, you'll be very happy. Even at its regular retail price of Rs. 5,999, there aren't many phones that could compete with it. If you're a first-time smartphone user, or are only concerned with basic communications, the Redmi 5A would be quite a good choice. Camera quality is really the only major downside, and if that's important to you, you'll have to spend a bit more.

For the same reasons, the 3GB/32GB version of the Redmi 5A is less compelling. There are other options to consider that let you trade the additional RAM and storage for features such as a larger screen and fingerprint reader, most notably Xiaomi's own Redmi 4 (Review) and Redmi Y1 Lite. We're also not too far from the launch of the Redmi 5 with its fashionable 18:9 display, though that model is likely to cost a little more.

Is Xiaomi Redmi 5A truly 'desh ka smartphone'? We discussed this on Orbital, our weekly technology podcast. You can listen to it via Apple Podcasts or RSS or just listen to this episode by hitting the play button below.