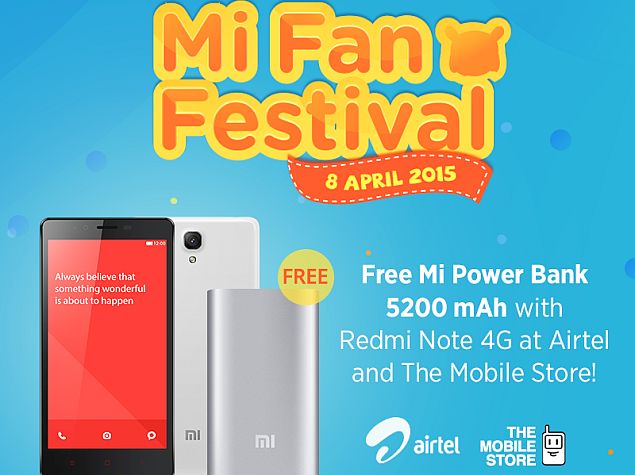 Xiaomi India has announced that the Redmi Note 4G will come bundled with free Mi Power Bank (5200mAh) only when purchasing via retail stores on Wednesday. The offer is only for a day on the Mi Fan Festival, which is being held commemorate the company's fifth anniversary.

To get a free 5200mAh Mi Power Bank, interested consumers will have to buy the Xiaomi Redmi Note 4G from outlets of Airtel or The Mobile Store on Wednesday. Notably, the Redmi Note 4G is also available via exclusive online retailer of Xiaomi products, Flipkart.

The company announced the news via a tweet on Monday and said, "Get a Mi Power Bank 5200mAh free when you purchase a Redmi Note 4G from Airtel India or The Mobile Stores."

The move is quite plainly an attempt by the Chinese company to increase sales of its Redmi Note 4G handsets that recently went on sale in India via these physical retail stores.

In the meanwhile, the company also announced a bundled offer for Redmi Note 4G handsets bought online on Wednesday - Xiaomi is bundling a pair of basic Mi In-Ear Headphones.

The company late last month announced that two of its smartphones - the Mi 4 and the Redmi Note 4G - would be available via physical retail stores.

It's worth noting that the Mi Power Bank of 5200mAh capacity is listed as out of stock on both Flipkart as well Mi.com - as is the 10400mAh variant.