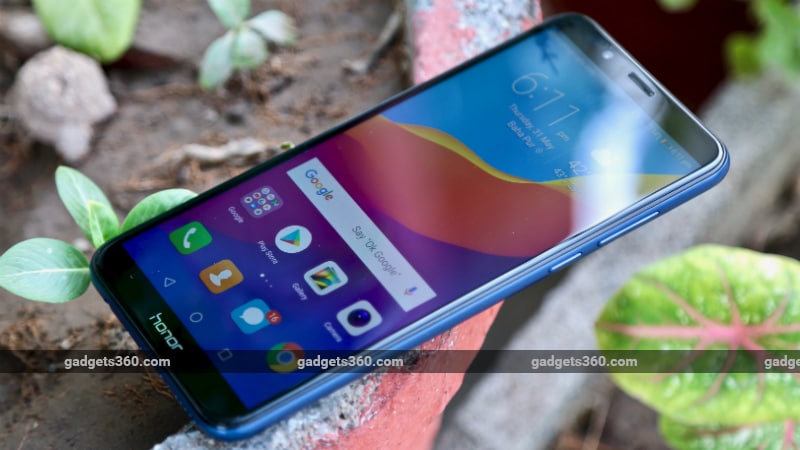 Honor has been on a roll of late. After launching the AI-enhanced Honor 10 (Review) in India, Huawei's sub-brand has now released two budget smartphones in the form of the Honor 7A and Honor 7C. Both models are equipped with features such as face recognition, 18:9 displays, and dual rear cameras.

We have the Honor 7C in for review, which is priced starting at Rs. 9,999 and competes head-on with the likes of the Xiaomi Redmi Note 5 (Review), Xiaomi Redmi 5 (Review), and the recently launched Oppo Realme 1 (Review). Does Honor's new smartphone have what it takes to stand out in the hyper-competitive budget smartphone market? Let's find out in our full review.

With a flat metal backplate, 2.5D curved glass on the front, and a display that dominates the front fascia, the Honor 7C feels reasonably sleek and premium. The lack of antenna lines, subtle Honor branding, minimal regulatory information lend a very clean and minimal look to the back panel. The horizontal dual camera setup is integrated smartly and barely protrudes at all. While the rear panel is mostly made of metal, there are plastic inserts on the top and bottom.

The Honor 7C is available in Black, Blue, and Gold colour options. We reviewed the Blue variant, the shade of which is unique and distinctive. While the phone is not too heavy (164g), it is very wide which hinders one-handed use considerably. Build quality though is top-notch. The phone feels solid in the hand and it survived multiple drops during our review period. The rear-mounted fingerprint sensor is fast and accurate, and is ergonomically placed. It can be used for a variety of shortcuts such as taking a picture, answering calls, and sliding down the notification panel.

The left of the Honor 7C is blank save for the SIM tray which has separate slots for Nano-SIM 1, Nano-SIM 2, and a microSD card. The right side has the volume rocker and power button which are tactile and well within reach. On the bottom of the phone is a Micro-USB port, flanked by a 3.5mm headphone socket and a speaker that is very shrill and tinny. The lack of a USB-Type C port for charging and data transfers is quite disappointing.

The Honor 7C features a 5.99-inch HD+ IPS LCD display with an aspect ratio of 18:9. Honor smartphones as of late have had stellar displays but the one on the Honor 7C is a bit of a mixed bag. While the colours are vibrant and viewing angles are spot on, outdoor visibility is average, and the display is very reflective. With most of its competitors offering full-HD panels, the resolution of 720x1440 comes across as slightly disappointing.

While the Honor 7C tackled basic day-to-day tasks reasonably well, it struggled with intensive workloads. With multiple apps open in the background, we experienced occasional lags. We also dealt with keyboard lags and choppy UI animations on several occasions during our review period.

We were slightly surprised by these performance issues as the Snapdragon 450 processor has made a better case for itself in the past with the Xiaomi Redmi 5. On a positive note, the Honor 7C did not get warm when pushed, and handled heavy games fairly well. Asphalt 8 did stutter a bit while loading, but gameplay was smooth.

Benchmark scores were very similar to those of the Xiaomi Redmi 5. We got 72,990 in AnTuTu, 20fps in GFXbench T-Rex, 13fps in GFX Bench Manhattan 3.1, and 780 and 3992 in Geekbench's single- and multi-core tests respectively.

The Honor 7C also supports face recognition, using the 8-megapixel front camera. It works quite well for the most part and is near instantaneous in good light, but struggles in direct sunlight and when lighting is not favourable.

The Honor 7C runs Huawei's EMUI 8.0 custom skin atop Android 8.0 Oreo. EMUI has matured over the years and is now one of the most versatile and feature-loaded skins out there. Notable features include a one-handed mode, knuckle gestures, an intelligent messages app that filters out spam, and the ability to automatically switch between Wi-Fi and mobile data depending on which connection is stronger. This time around, Honor has also added a Ride Mode for bikers and single-touch fingerprint access to Paytm.

EMUI 8.0 is still cluttered in some places and laden with bloat. A multitude of Honor's applications compete with Google's own, and the phone comes with five Gameloft games and a host of third-party apps such as TrueCaller, Netflix, Messenger, and UC Browser pre-installed. Honor has not announced an update roadmap for its recent devices and there is no information regarding any potential Android P update for this phone.

Battery life is decent but not overly impressive. The Honor 7C managed to last 10 hours and 40 minutes in our HD video battery loop test. In our experience, the smartphone just about managed to power through a day of moderate use, with a charge needed by around 10pm. EMUI 8.0 has a host of battery saving features, one of which reduces the screen resolution when you're running low on power. The smartphone does not support quick charging, and takes more than two and a half hours to charge fully using the included charger.

The Honor 7C features a dual-camera setup at the back comprised of a 13-megapixel primary sensor, alongside a 2-megapixel secondary sensor for capturing depth data. At the front, the Honor 7C has an 8-megapixel foxed focus snapper. The camera app is fairly easy to use but lacks a fully featured Pro mode.

The cameras on the Honor 7C are average at best. While the cameras on the Redmi Note 5 and Realme 1 are also not particularly impressive, the image quality that they deliver is a step above that of the Honor 7C. Shots taken during the day look good on the phone's display, but closer examination reveals a lack of detail.

In our experience, shots taken at night came out blurry and grainy, and had a considerable amount of noise. Videos were distinctly average and suffered from a lack of detail and constant focus-shifting. There is a wide aperture mode on offer with seven levels of blur to choose from. The blur effect is not the most accurate, and edge detection around the subject was poor.

The 8-megapixel front shooter takes decent photos in good light but struggles in low light, producing noisy and murky shots. Beauty mode is on by default when you take selfies, and makes images look over-processed and artificial.

Verdict
The Honor 7C looks sleek, is built well, and is loaded with features. Battery life is decent and so is the display. That said, EUMI is laggy and laden with third-party bloat, and both the front and rear cameras are average at best. Potential buyers should take a look at the Oppo Realme 1 (Review), which lacks a fingerprint sensor but offers a better-rounded package, or the Redmi Note 5 (Review) which offers far more value for money. The Honor 7C is also priced dangerously close to Honor's own 9 Lite (Review), which has a higher-resolution display, a better set of cameras, and a sleek glass body.