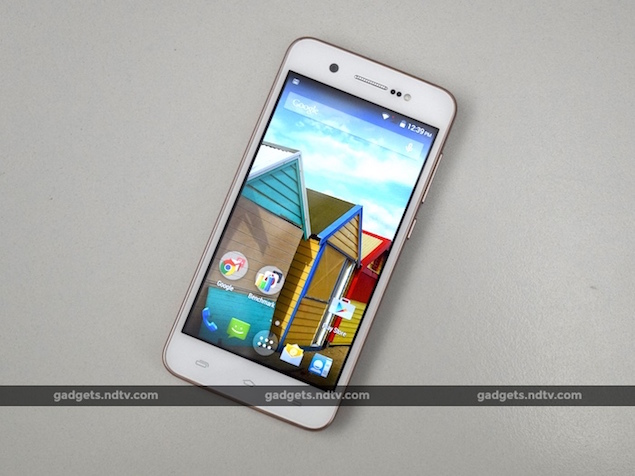 India played Pakistan in its first match of the ICC World Cup 2015. Indian captain Virat Kohli scored a century, and then the team's bowlers rose to the occasion and prevented Pakistan from chasing the total. While Indians all across the globe were busy savouring the victory, brands that had run ad spots during the telecast were busy calculating their return on investment.

One such brand to benefit from the stellar viewership was Karbonn. It was almost impossible to miss the advertisement for their latest budget offering - Karbonn Titanium Machine Titanium S310 - in between and after overs.

Considering Karbonn's massive push to sell this phone, we went ahead and put it through our commprehensive suite of tests. Read on to find out if the Machone Titanium S310 is a good budget smartphone. 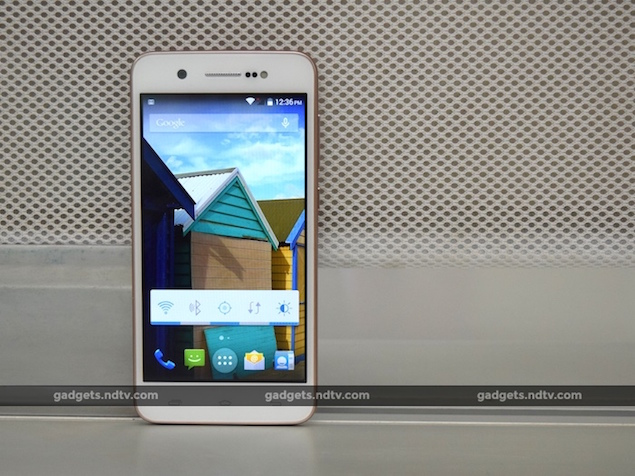 Look and feel
At first glance, the Machone Titanium S310, with its curved edges and speakers on the bottom, clearly resembles the iPhone 6. The phone is very comfortable to use with one hand thanks to its relatively compact dimensions of 137x68x8.1mm. The fact that it is also pretty light helps. Overall, we have no complaints with the ergonomics of the Machone Titanium S310.

We got the white and gold version of the Machone Titanium S310. The phone is also available in white/silver and deep blue. On the rear is acover that can be peeled off. Underneath it are two SIM card slots, a slot for a microSD card, and the battery compartment. Also on the rear lies the primary camera, which has a golden ring around it, accompanied by an LED flash. Karbonn adds an extra microphone on the back to detect and reduce ambient noise during phone calls. The 3.5mm audio jack and the Micro-USB port lie on the top edge of the phone. The power button and volume rocker are on the right edge, and both have good travel.

The 4.7-inch display has fairly decent resolution of 720x1280. It isn't protected by Corning's Gorilla glass or Asahi's Dragontrail glass, which means that an additional screen guard becomes essential. The screen itself displays warm, natural colours and the viewing angles are not too bad. However, even at maximum brightness the screen looks lifeless and dull. Sunlight legibility also takes a hit because of the low brightness levels of the screen. 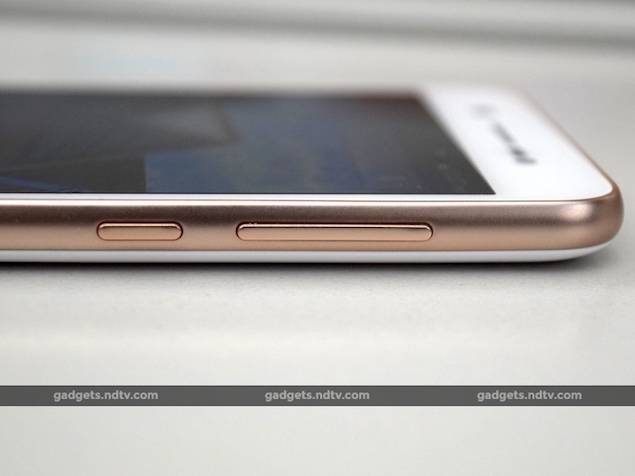 Specifications and software
Karbonn uses a Mediatek MT6582 quad-core processor clocked at 1.3GHz with a Mali-400 MP2 GPU. There is 1GB of RAM and 8GB of internal storage for apps, music, videos, documents and other data. In case you need more space, you can add up to 32GB using a microSD card.

Both SIM cards inside the Machone Titanium S310 can connect to 3G networks. Other connectivity choices include Wi-Fi a/b/g/n and Bluetooth. The primary camera has a BSI sensor and can capture 8-megapixel images. The front camera on the other hand can capture 5-megapixel photos. Interestingly, the front camera also has an LED flash for low-light situations. There is an 1800mAh battery providing the juice to run the phone. 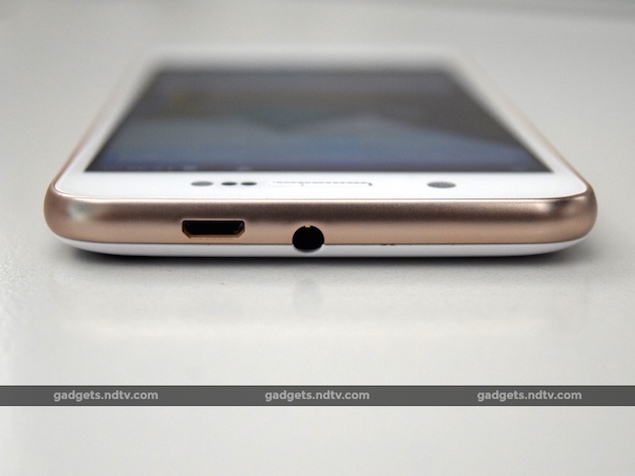 Karbonn has played around slightly with the stock Android 4.4.2 (KitKat) UI. It has its own lock screen that shows notifications. You can swipe across the notifications to view messages directly. Quick settings are lined up in a horizontal bar on the notifications shade. There are a few software settings in the Machone Titanium S310 that are clearly inspired by smartphones made by competing brands. 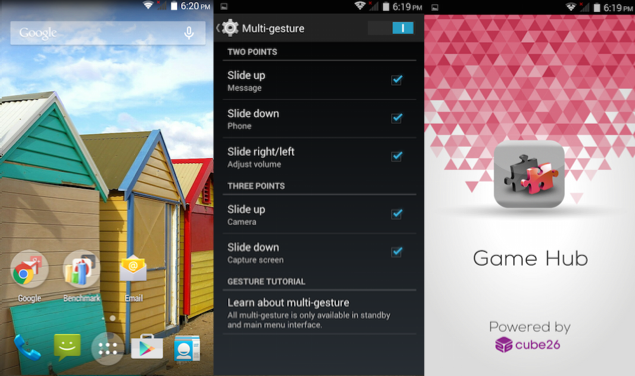 A multi-gesture option allows users to configure two-finger or three-finger swipes to go directly into a particular app/setting. For example, a two-finger left/right slide adjusts the volume. Unfortunately, there is no way to tweak the gestures to your own preferences. The Smart Awake feature lets you use a gesture to get to an app directly, or double tap to wake the phone from sleep. Karbonn also lets users to lock the screen by double tapping it in standby mode. All these work really well and we didn't face any hiccups. Karbonn has also added a few third-party apps, all of which can be deleted, including Amazon, Asphalt Overdrive, Flipkart, Game Hub, Snapdeal and Spider-Man: Ultimate. 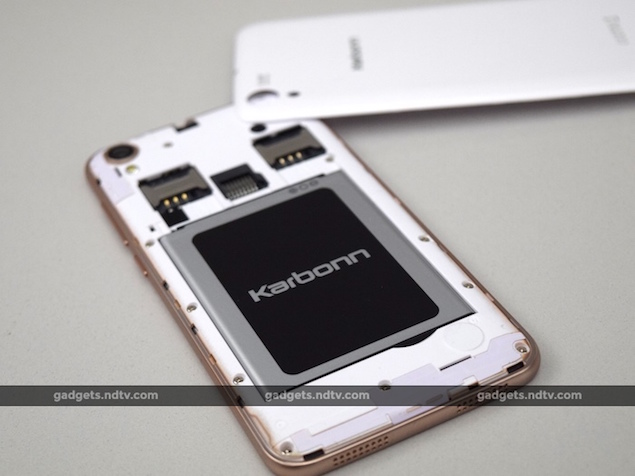 Performance and camera
The Machone Titanium S310 is a capable phone for daily tasks and thanks to the absence of a skin, the software is fairly smooth. The phone did hang once when we opened multiple apps but it never happened again. Casual games ran fine but graphically intensive games like Asphalt and Dead Trigger 2 stuttered.

In the AnTuTu and Quadrant benchmark tests, the phone scored 14,259 and 7,101 respectively. The Machone Titanium S310 also scored 7.1fps and 3,151 points in our graphics benchmark tests GFXbench and 3D Mark Ice Storm. These scores are fairly normal for phones in this price range. 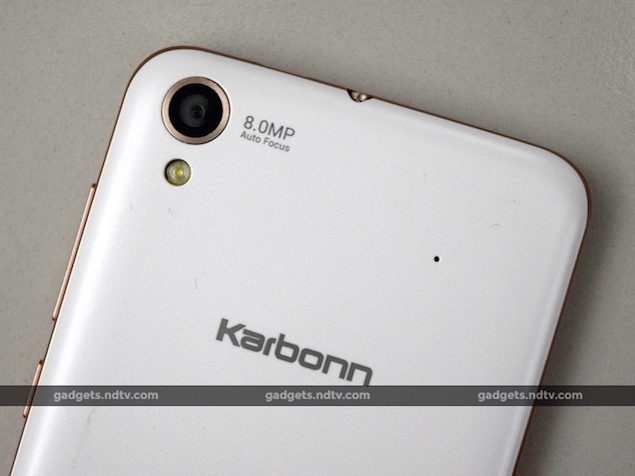 We ran a few high-resolution videos and all of them played without any hiccups, including our heavily encoded 40mbps sample. The speaker gets really loud and doesn't distort at maximum volume. The bundled earphones are pretty decent and should definitely serve their purpose. Call quality is very good and the sound was crystal clear on both ends. In our battery test the phone lasted 6 hours and 12 minutes, which means that it should be able to last a full day before you have to reach for the charger.

Karbonn has been tooting its horn about the performance of the Machone Titanium S310's cameras, and we think the company is making much ado about nothing. In fact, the performance of both cameras wasappalling to say the least. Even in bright daylight the images we captured had artificial colours and there was a lot of chromatic aberration. The images also had barrel distortion. While the camera manages to let in some light in low-light conditions, the colours were completely awry.

The 5-megapixel front camera is no better and it tends to create a watercolour effect that looks really artificial. Both cameras captured videos in .3gp format. The 1080p sample from the primary camera and the 480p sample from the front one were absolutely unusable. We are totally disappointed with the performance of both cameras. 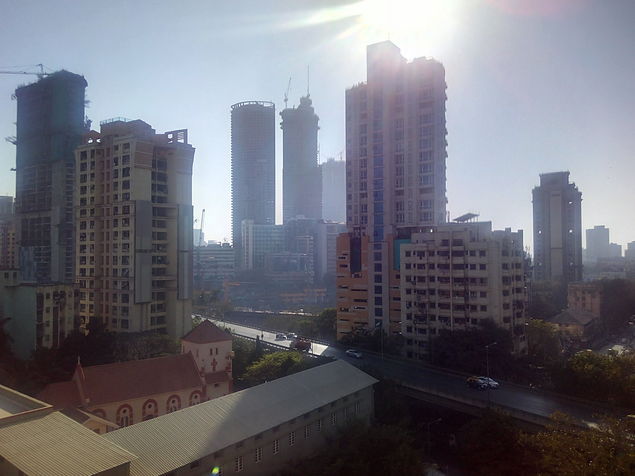 Despite the reasonably good performance and decent design, we aren't too keen on the entire package. The biggest letdown is the performance of the camera, and no number of advertisements shoved at consumers during ICC Cricket World Cup 2015 is going to prove otherwise.