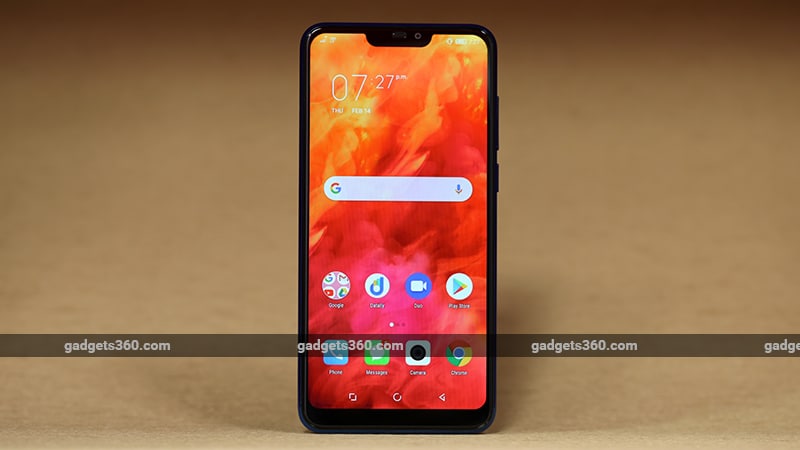 Lava Z92 comes with a 6.22-inch display and is powered by the MediaTek Helio P22 SoC

Lava Mobiles was slower than its competitors in 2018, launching very few smartphones in the market. While some manufacturers were launching new models every few weeks or months, Lava only launched a handful throughout the year. The company wants to start 2019 with the Z92, a budget smartphone priced at the affordable Rs. 10,000 mark. Sticking with current trends, the Lava Z92 has a notched display and is powered by the MediaTek Helio P22 SoC. Is this enough to help Lava make a mark in this segment? We put it to the test to find out.

The Lava Z92 is one of the better looking smartphones to come out of the manufacturer's stable. It is sleek, light, and feels good when held in the hand. The Z92 has a big 6.22-inch display with a notch at the top which houses a tiny earpiece and a selfie camera. It has thin bezels at the top and the sides, but one at below the display is considerably thicker.

Lava has curved the sides, which makes the Z92 comfortable to hold. It is only available in Ocean Blue, but this is still a welcome change from the usual gold and black options in this price range. While the glossy back looks good, it is also a fingerprint magnet and picks up smudges quite easily. Lava ships a transparent case in the box, which helps keep smudges off.

There is a fingerprint sensor at the back along with a single camera and a dual-LED flash. The positioning of the fingerprint sensor is good, and it is easy to reach. Lava has positioned the power and the volume buttons at the right, while the SIM tray is on the left.

At the bottom, you'll find a 3.5mm headphone jack, a Micro-USB port, and the loudspeaker grille.The top of the phone is bare.

The Lava Z92 is a budget smartphone with modest specifications. It is powered by the MediaTek Helio P22 SoC, which we have seen powering the Xiaomi Redmi 6 (Review). There is 3GB of RAM and 32GB of storage. You do have the option to expand storage by up to 256GB thanks to the dedicated microSD card slot.

In terms of software, the Z92 runs Android 8.1 Oreo with Lava's Star OS 5.1 on top. It does not have an app drawer. Lava has tweaked the icons for apps as well as the quick toggles in the notifications shade, which might take some time getting used to. The UI seems to be optimised for the notch, as the notification icons have been rearranged.

There are a few other customisations baked into Star OS 5.1. You can change the order of buttons in the navigation bar or switch to gesture-based navigation. There is also support for shortcut gestures such as a double-tap on the screen to wake the device up. You have the option to draw alphabet shapes on the lock screen to trigger shortcuts. Lava has assigned three gestures to launch the camera quickly, toggle the flashlight, and launch the browser. There are four others that are unassigned so you can use them to launch any apps of your choosing quickly.

A three-finger swipe will capture a screenshot, you can activate the speakerphone function automatically during a call just by moving the phone away from your ear, and you can flip the device over to mute an incoming call.

Face recognition uses the selfie camera to scan your face and unlock the smartphone.

The Lava Z92 offers decent performance for day-to-day use, and we did not observe any lag while scrolling through the UI. However, we did notice that some apps launched relatively slowly. The 3GB of RAM is enough for multitasking when you have a few apps open, but heavier apps will make the phone kill a few in the background.

While using this smartphone we observed that the display had good sunlight legibility which made it easy to use outdoors. The fingerprint sensor is quick, and while face recognition isn't the fastest, it worked well.

We played games like PUBG Mobile and Asphalt 8 to gauge the performance of the Z92. PUBG Mobile ran with the graphics set to Smooth and the frame rate set to Medium. While playing the game we observed stutters at these settings. Turning the graphics down to Low reduced the amount of stuttering. We couldn't install Asphalt 9, as it simply wouldn't show up as a compatible app in the Play Store. Asphalt 8 Airborne ran fine, but at relatively low settings.

The Ocean Blue colour does look refreshing in the Rs. 10,000 price segment

The 3260mAh battery isn't the largest we've seen in a phone at this price point but power usage is kept under control. In our HD video loop test, the phone managed to clock 12 hours and 30 minutes. With our usage that involved taking a few photos, an active WhatsApp account, and an hour of navigation using Google Maps, we were left with 54 percent still left in the tank at the end of 24 hours.

While playing PUBG Mobile for 30 minutes, we observed a battery drop of 10 percent. If you want the phone to be frugal with the battery then you can enable Power Saver mode or Super Power Saver mode. The supplied 10W charger is capable of charging the phone in 1 hour and 40 minutes, and it charges to 63 percent in one hour.

The Lava Z92 has a single 13-megapixel camera at the back with an f/2.0 aperture and 1.12-micron pixels. At the front, there's an 8-megapixel selfie shooter with an f/2.0 aperture and 1.12-micron pixels. The camera app is very basic but has a few modes to play with. These include Studio, AR Sticker, Super Night, Video Beauty, Time Lapse, Filter, Template, Panorama, Intelligent Selfie, and Microspur modes. The Microspur mode is used for clicking macros and it gives you a slider to adjust focus manually.

Photos taken with the Lava Z92 were good for the price the phone commands. In daylight it managed to get the exposure right and offer good details. Even when we zoomed in to images, we could see a decent amount of detail.

When shooting macros we had to tap to focus where we wanted, since the phone didn't do it well automatically. Macros had good detail but the phone boosted contrast to the extent that colours looked artificial.

In low light, the phone managed to keep noise under control without shots coming out grainy, which is really nice. However, the shutter is kept open for longer which could result in a blurry shot if your hands move even a little bit. In dimly lit scenarios we observed a drop in details for objects at a distance as they appeared flat and lacked good definition around the edges.

The Studio mode can be used to take shots with a bokeh effect which we found to be good, but edge detection was only average.

Selfies don't have very good details. We used the Intelligent Selfie mode which uses the higher resolution rear camera and helps you frame a shot with voice prompts when you can't see the screen. These shots predictably turned out to be better. The phone does not have a front flash, but uses the screen as a flash when taking selfies in a dark environment. Video recording maxes out at 1080p but there's no stabilisation which results in shaky clips.

Verdict
The Lava Z92 isn't underpowered or horribly overpriced for what it offers. It has a capable processor and offers a usable experience. Its cameras are good in daylight but quality isn't all that good when it comes to macro and low-light photography. Lava has launched the phone with Android Oreo and there is no communication regarding whether or not the company will offer an Android Pie upgrade.

The Lava Z92 isn't a bad phone, but the competition offers more powerful smartphones at the same price. Apart from the Xiaomi Redmi 6 Pro (Review), you should consider the Asus ZenFone Max Pro M1 (Review) and the Nokia 5.1 Plus (Review) before making your final decision, as both of these options have recently received price drops.