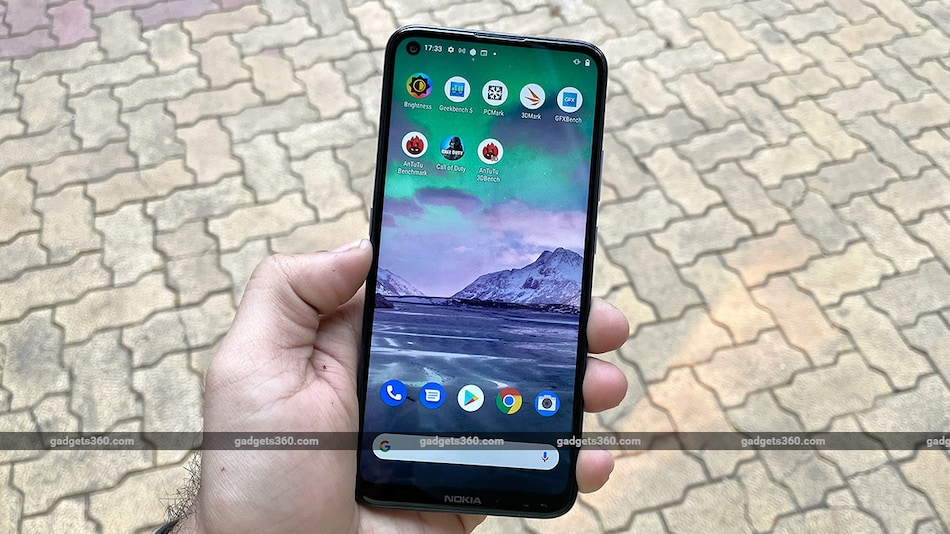 HMD Global recently launched two smartphones in India, the Nokia 3.4 and the Nokia 5.4. We have already tested the Nokia 5.4, which scored some points for design but didn't really back that up with performance. When I got to the Nokia 3.4, I wondered if it would feel the same. This budget-friendly model is priced at Rs. 11,999 in India. It has a more modest Qualcomm Snapdragon 460 processor and a smaller 4,000mAh battery, which might put it at a disadvantage compared to others at this price level, but what it has going for it is the promise of guaranteed software updates, which is rare. Should you consider the Nokia 3.4? Let's find out.

The first thing I noticed about the Nokia 3.4 was its build quality. It is made out of polycarbonate but it feels solid in the hand. The display measures 6.39 inches and has a 19.5:9 aspect ratio which makes it tall and narrow. Holding the Nokia 3.4 isn't much of an issue but I couldn't easily reach the top of the display while using the phone single-handed. HMD Global offers a hole-punch design while most of its competitors still sport a notch for the front camera. There are noticeable bezels all around, but the thick chin with the Nokia logo will catch your attention.

The power button is placed slightly above the midpoint on the frame and is convenient to reach while holding the device. The volume buttons are placed above the power button, and these too can be reached without needing to shuffle the phone in the hand. On the opposite side sits the dedicated Google Assistant button with the SIM tray above it. The Nokia 3.4 has two Nano-SIM slots and a dedicated microSD slot for storage expansion.

A dedicated button on the left makes it easy to summon the Google Assistant.

The rear panel has a textured finish which keeps it free from fingerprints. There is a fingerprint scanner which is well positioned, and my finger rested on it naturally while holding the phone. The circular camera module at the back is not a very common design element and does stand out. The Nokia 3.4 has a triple camera setup, and the ring doesn't protrude too much, which is a good thing. This phone isn't too thick either and tips the scales at 180g which is lighter than some of the other smartphones in this price range.

The Nokia 3.4 has a USB Type-C port at the bottom along with a 3.5mm headphone jack and the loudspeaker. HMD Global ships a 5W charger in the box along with a transparent case. The Nokia 3.4 is available in three colours: Fjord, Dusk, and Charcoal. I had the Dusk colour variant which has a purple finish to it. You could opt for Fjord if you like a flashy colour or Charcoal if you like to keep things simple.

The Nokia 3.4 has an HD+ resolution display which is common for a smartphone at this price, though there are a few exceptions such as the Redmi 9 Power (Review) and the Poco M3 (Review) which both have full-HD+ displays. HMD Global has picked the Qualcomm Snapdragon 460 and paired it with 4GB of RAM and 64GB of storage. There are no other variants. Thankfully, storage is expandable using the dedicated microSD card slot. You get a 4,000mAh battery, which is slightly smaller than what most of the competition these days packs. HMD Global has priced the Nokia 3.4 at Rs. 11,999 which puts it up against some fierce competition.

The Nokia 3.4 is currently running Android 10 but is guaranteed to get updates

The Nokia 3.4 has support for Bluetooth 4.2, Wi-Fi, four satellite navigation systems, and dual 4G VoLTE. In terms of software, it runs clean stock Android, and it is part of the Android One programme. It currently ships with Android 10 and my unit had the February Android security patch which is very good. HMD Global claims that the Nokia 3.4 is ready for Android 11, and based on the terms of the Android One programme, it will eventually get an update to Android 12. This puts the Nokia 3.4 far ahead of the competition, since budget smartphones rarely get anything beyond one Android version upgrade. There are no bloatware apps on the smartphone, and the UI is very easy to use. For someone who prefers stock Android, the Nokia 3.4 will be appealing, but if you like having more features and customisations, you'll miss them on this phone.

The Nokia 3.4 has adequate hardware to handle day-to-day tasks. With 4GB of RAM, you won't really face any issues unless you are multitasking between heavy apps. The Snapdragon 460 is quick to load small apps but you'll need to wait for it to load heavier ones. I found the fingerprint scanner to be quick to unlock the smartphone and it never needed more than one attempt. There is face recognition as well, which worked quickly even in different lighting conditions.

I ran our standard set of benchmarks to see where the Nokia 3.4 stands compared to other phones in its price range. In AnTuTu, the Nokia 3.4 managed 1,49,404 points, while it scored 256 and 1,289 points respectively in Geekbench 5's single-core and multi-core tests. These scores were lower than those of the Redmi 9 Power and the Poco M3. As for graphics, the Nokia 3.4 scored 37fps in GFXBench's T-Rex scene and 9.6fps in the Car Chase scene.

The triple camera setup on the Nokia 3.4 sits inside a circular module

I played Call of Duty Mobile on the Nokia 3.4 and it defaulted to the High graphics preset and Medium frame rate. The game was playable at these settings without any issues. After playing for 15 minutes, the phone showed a battery drop of 5 percent. I also found that it got warm to the touch around the camera module.

The Nokia 3.4 packs in a relatively small 4,000mAh battery but you will still be able to get through at least one full day on one charge. However, charging is very slow when using the bundled 5W charger. I could only get the phone to 16 percent in 30 minutes, and it only hit 33 percent after an hour. Charging the phone completely took over three hours, which is slow by today's standards. You can use a higher rated charger to get better results. Other affordable smartphones such as the Realme Narzo 30A come with an 18W charger in the box.

You get a triple camera setup on the Nokia 3.4, consisting of a 13-megapixel primary camera, a 5-megapixel ultra-wide angle camera, and a 2-megapixel depth sensor. For selfies, this phone has an 8-megapixel shooter. The camera app is very basic and you can swipe across the viewfinder to switch between the different shooting modes. You get a Night mode, Portrait mode, and beautification options in the default camera app, but it seems limited compared to the shooting options you get on phones with custom apps such as the Poco M3.

Photos taken with the Nokia 3.4 appeared to be decent on the phone's own screen, but on magnifying them, there was visible grain even on objects close to the camera. Background elements lacked sharpness and text wasn't legible. Shooting using the ultra-wide angle camera resulted in a significant loss in detail and a drop in contrast levels, as well as barrel distortion at the edges.

Close-up shots turned out well with good details and a soft background blur. In portrait shots, the Nokia 3.4 could manage good edge detection and separated the subject from the background quite well. The camera app also lets you set the level of blur before taking the shot.

In low light, the AI sets the phone up for a night scene. It detects the scene quickly but takes over four seconds to capture it. The output wasn't great, and a lot of detail was lost in the shadows. The  Night mode does deliver brighter images with significantly better detail in the shadows, but this still isn't the best performance I've seen at this price point.

Selfies taken in daylight were good, and you do have the option to shoot portraits using the selfie camera. The Nokia 3.4 managed good edge detection produced sharp results outdoors in the day. Low-light selfies without a light source nearby lacked detail.

Video recording tops out at 1080p for the primary as well as the selfie camera, but lacked stabilisation. I also found the smartphone to be a bit slow to meter light while recording videos.

The Nokia 3.4 is a well-built smartphone that promises guaranteed Android updates. This will appeal to an Android purist who looks forward to running the latest software without spending significantly on a new smartphone. However, there is nothing about the Nokia 3.4 that stands out other than this promise. The competition offers bigger batteries, faster charging, better displays, and better camera quality.

If the appeal of clean software and updates is far greater than everything else for you, the Nokia 3.4 should keep you happy. On the other hand, if you want better features and performance, the Redmi 9 Power (Review) or the Poco M3 (Review) will potentially suit your needs better.