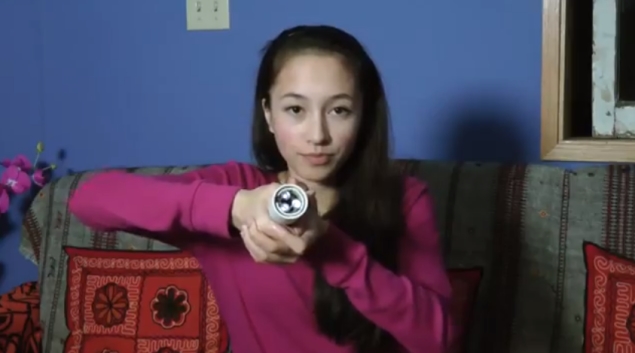 The thermoelectric effect is the direct conversion of temperature differences to electric voltage and vice-versa. "I'm sure we've all had that annoying experience when we desperately need a flashlight, we find one, and the batteries are out," Makosinski told NBC News.

"Imagine how much money we would save and the amount of toxins leached into the soil etc reduced if we didn't use any batteries in flashlights!" she said.

To create the flashlight, Makosinski measured how much electricity could be generated from the heat of a palm about 57 milliwatts and how much she needed to light the LED about half a milliwatt.

Next, she got several Peltier tiles which when warm on one side and cool on the other could generate electricity, and a few other bits necessary to make the current usable by a normal LED.

Finally, she mounted the tiles and circuitry onto a hollow aluminum tube; air inside the tube would cool the Peltier tiles, while the warmth of a hand would heat the other side. With a little tweaking of voltages and other components, the invention worked.

The light generated is modest, but enough to find your keys or light the page of a book. It worked for around half an hour in her tests at an ambient temperature of about 10 degrees Celsius, but would last longer or shorter depending on temperature differences.

"The flashlight I have made is more of a prototype then a final product, but the components in my device are quite strong," Makosinski said.

"Of course, if it was to be used and manufactured, I would try to seal off the electronic components in some sort of casing so that it wouldn't get heavily exposed to the elements (example water), and therefore last longer," she said.

Makosinski has submitted her invention for the Google Science Fair and will be in California to visit Google headquarters in September 2013 for the final judging event.
Comments